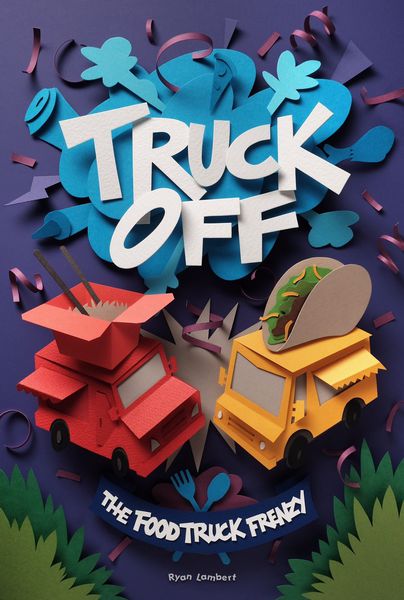 Ordering the same food at your favorite place can be comforting, but trying something new can be rewarding. Truck Off: The Food Truck Frenzy tries something new with a setting you don’t usually see in board games—players are operators of a fleet of food trucks, vying for the best positions and trying to make the most money. Funded with the help of Kickstarter backers, Truck Off is now available for purchase.

The game’s title is a cheeky play on words, while also making it sound like a head-to-head competition (walk-off, roll-off, etc.). It will go over most younger player’s heads and maybe some adults, but the way it is referenced in the rule book makes it clear it’s a play on telling someone to f*** off.

Each player is given a stack of trucks with a number on the back that corresponds with the different venue’s dice. In smaller games, not every venue is used, but in a 5-6 player game all of them are placed out. Additionally, players are given a stack of action cards that can be used each round, and players decide on which two to discard before play begins. The rule book has suggestions for which to discard if you want a more friendly, or more of a “take that” style game. You can also do it randomly. Which truck company you choose does not matter other than they are each themed—”Fry Hard” has a menu made up of movie references, while “Game Jammin'” is chock-full of board game nods.

Once everything is set up, players choose two trucks to put out and simultaneously reveal them. Each venue’s die is rolled, which tells you what the payout will be for that location. Next, players are able to choose as many action cards as they’d like, but only get to resolve them one at a time starting with the first player and going around. After all actions are done, payouts are calculated and everything is reset for another round, a full game being five rounds. Any actions played are discarded. The game encourages players to use the “Daily Specials” variant deck after getting comfortable.

The money chits, trucks, and venue cards are thick, quality boards. The cards are not too thick, a standard size, and have some ingeniously titled food items that would be a chore to order in real life but are fun to read aloud at the table. The flavor text on these cards made me really appreciate the effort put into the theme on Truck Off.

The art style could be described as realistic but silly—all the trucks are brightly colored and visually appealing. Truck Off is similar in style to Machi Koro in this regard. It totally felt like a good fit for the theme, and who wouldn’t want a vibrant, eye-popping color scheme for a truck meant to bring people in for food?

The game play in Truck Off is light—you’ll be mostly guessing where other players will be parking their trucks for each round. Some strategy comes into play with the action cards, but since you only get to do one, your best laid plans might be shut down by the time your turn comes around again. You can also get some Action Paralysis with younger or “non-gamer” players (who this game might appeal to) when they’re not sure what actions to play. Thankfully, they can still play extra actions the next turn to try to catch up, but in my experience, playing the slow and steady approach wins versus trying to go “all in” on one round.

Some strategy will help you, but if your truck or venue gets shut down before you can get paid, it will all be for nothing. The biggest complaint I have with Truck Off is that if you go last in the action round, or just happen to be in the way of one to two other players, you might have a worthless round that nets you only a few dollars. It can make some rounds feel like players have little to no agency, which can be a fun killer.

That being said, since no game is made or broke in one round, it’s not the end of the world if you don’t get a good payout once. I played Truck Off with several different sized groups, and each game took about the same amount of time thanks to the simultaneous first part of each round. The game even comes with alternate rules for a two-player game including an A.I. player (which is helpful so that the game doesn’t devolve into just fighting over the top two payout venues each round). The one thing I didn’t like was the alternate action selection for a two-player game, which has you building an overlapping pyramid of action cards. Also included is the “Daily Specials” deck, which I would highly recommend playing with as soon as you’re comfortable with the base game. Two cards come out each round and stay out until they’re replaced by another card for the same location—they can make the decisions on where to place your trucks wildly different the way they modify each venue.

Overall this game was fun and had me laughing with the company names and flavor text full of jokes and puns. It’s a lighter game that could easily be enjoyed by a wider or younger audience, but may not find room at the table for a more serious strategy gamer. I struggled even calling it a “worker-placement” game but you’re literally placing trucks each round at the different venues. To make a food comparison, this game is a tasty appetizer—worth your while if you get it, but if what you really want is a main course, there may not be enough here to satisfy.