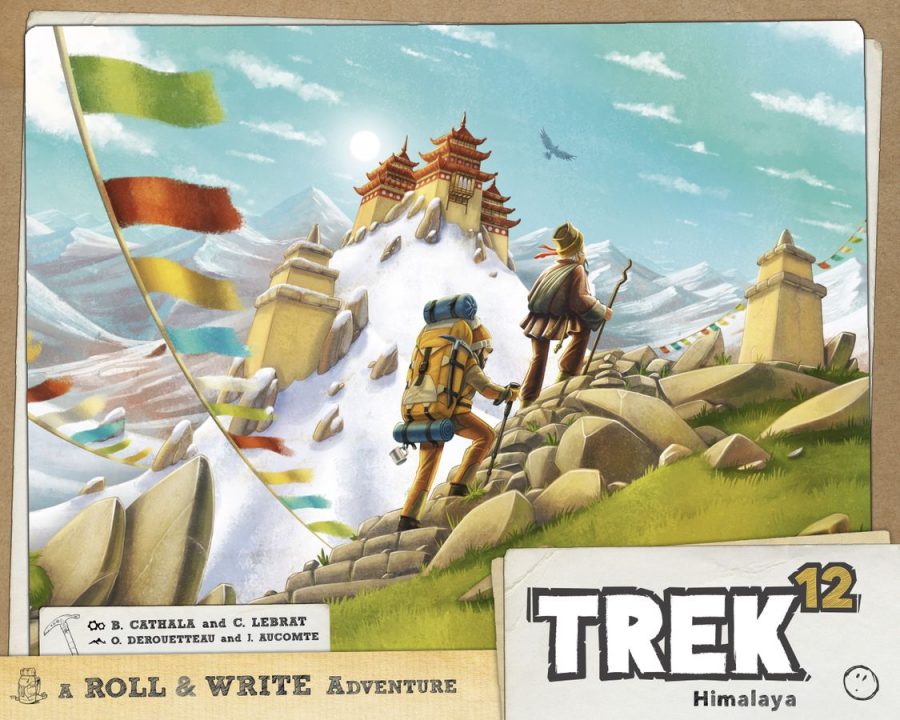 Trek 12 is a new roll-and-write game with a mountain-climbing theme. In this game, players use die results to map out a climbing route and summit a towering peak. How does it compare to other roll-and-writes out there? Grab your hiking boots and let’s find out!

In Trek 12, players harness up for a frigid adventure in the Himalayas. The goal of the game is to earn the most points, and players do this by strategically plotting a course up the slope.

At the start of the game, every player receives an ascent sheet, which shows the mountain (obviously), as well as a “dice options table” (upper-right) and a scoring area (bottom). Each round, a pair of dice is rolled, and all players individually use the results.

The dice show values 0-5 and 1-6. Whatever the results of the roll, players check off an option on their dice table to decide how to use them. Players’ options are:

Whatever option they choose, they tick off the corresponding box on their table; each option can only be used 4 times per game.

Players then individually write the number they chose on a mountain space. The first number can be placed anywhere, but after that, all numbers must be placed adjacent to a previously filled space. If a player is forced to use a number higher than 12 (or 6 in a dangerous terrain space), they instead draw an unhappy face there. These become scoring penalties at the end of the game.

As the game progresses, players aim to make “fixed lines” and “mapped zones.” A fixed line is a sequential run of numbers on connecting spaces (e.g. 3-4-5) and a mapped zone is a contiguous group of spaces with the same number (e.g. 10-10-10). Whenever someone makes either connection, they denote it on their sheet—a line between neighboring circles indicates a fixed line and a group of shaded spaces indicates a mapped zone.

Play continues in this fashion, with players rolling the dice and using the results, until all mountain spaces have been filled. At that time, scores are tallied based on fixed lines, mapped zones, and penalties, and the player with the highest score wins. (Players are penalized for any spaces that are not part of a fixed line or mapped zone!)

Trek 12 also includes an advanced “Expedition Mode”—basically the full game—as well as a solitaire variant, appropriately titled “Free Solo Mode.” Expedition Mode is played across not 1, but 3 mountains, and it introduces helpful new abilities. The winner is no longer decided by a raw point total, but rather by reputation stars, which are awarded on each mountain for 1) reaching a specific point threshold, 2) having more points than anyone else, and 3) breaking the previous high score. (Players are meant to memorialize their high scores on the “hall of fame” page on the back of the rulebook.) Additionally, Expedition Mode includes sealed envelopes containing special surprises for players to discover as they fulfill in-game objectives.

For serious mountaineers, an expansion called Trek 12 + 1 is also available. Made to look like an alpinist’s diary, this handsome package includes a new mountain to venture and new sealed envelopes to explore.

Roll-and-write games tend to be hit-or-miss for me, but I enjoy Trek 12. There are not many mountain climbing games out there—I can only think of 3 or 4 others—so even though the thematic integration of Trek 12 is light, it’s a welcome change of pace.

I like how this game is wide open at the beginning, but players’ options get progressively tighter as time goes on. While players have all 5 dice options available, they can usually work with any die result, but as their options get used up, things get noticeably tougher. Naturally then, players want to keep their options open as long as possible, but they have to balance this with the need to get specific numbers. If a player really needs an 8, for instance, is it worth it to spend their last “sum” option (say, on a roll of 3 and 5) to get it? After all, without a sum available, they will have no way to get an 11 later on if they need it! (Stupid prime numbers…)

Each mountain consists of 19 spaces, and players only have 20 dice options for the entire game (4 each of the 5 options). This late-game tightening means players need to think carefully about which options they use early on. There is of course inherent luck given that this is a roll-and-write, but players have a surprising amount of control and the game rewards thoughtful planning.

Trek 12 presents players with an interesting puzzle, and I definitely think fans of roll-and-writes will like it. I haven’t seen another game that uses the “roll the dice and players choose how to use the result” formula quite this way. Things move quickly due to the simultaneous gameplay, so it’s easy to run multiple rounds of Trek 12 back-to-back (or to do a 3-mountain expedition!). If you’re in the mood for an alpine adventure, check this game out.

Trek 12 is a standout among roll-and-write games. It presents an interesting puzzle with lots of variability and extra content to explore. Highly recommended for fans of this genre.