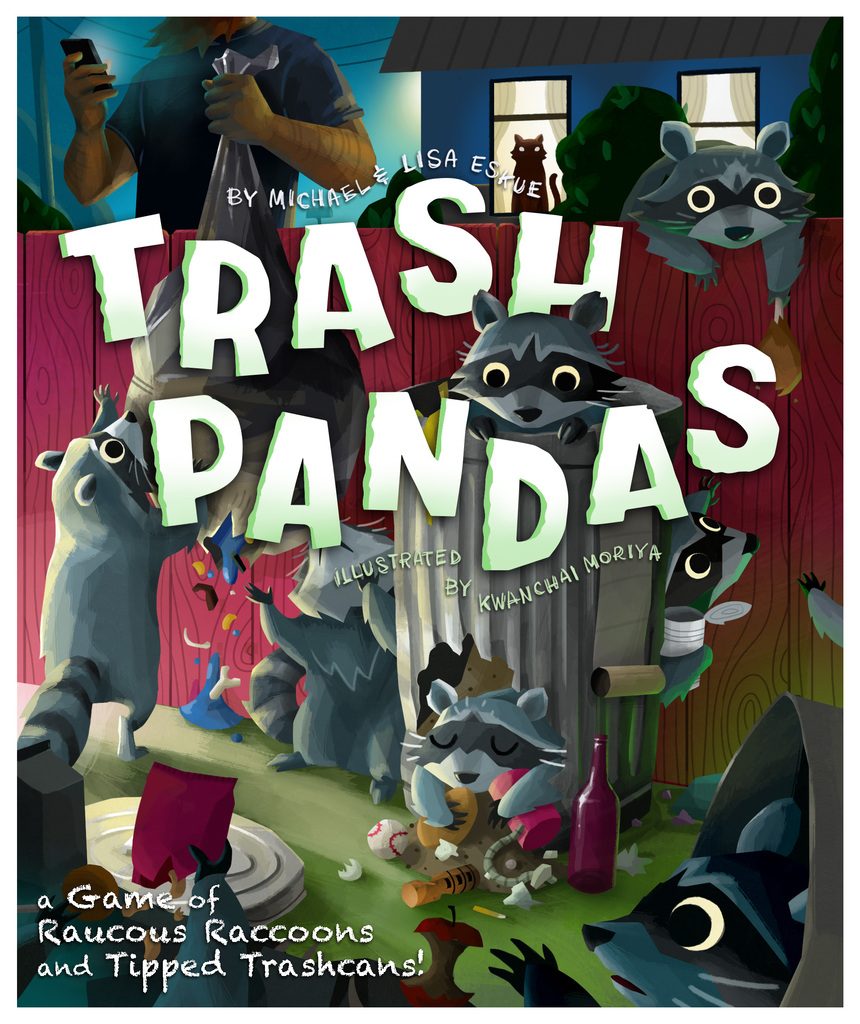 Trash Pandas is a meme-tastic game about raccoons digging through trash cans to find shiny treasures and tasty treats. It is a great game for families.

For the sake of full disclosure, I’d like to begin this review by saying that I know the designers of this game, and they provided me with a review copy. This will in no way color my review of the game.

When the “Trash Pandas” meme hit the internet a couple years ago, I had a good, long laugh about it.

Michael and Lisa Eskue’s latest game turned the above silliness into a playable experience. Trash Pandas is a two- to four-player card game from Red Rook Games, the Eskues’ own publishing imprint. A new version will be coming soon from Gamewright, but I will be covering the Red Rook edition in this review.

Trash Pandas comes with a deck of cards, a custom die, and six tokens matching the die faces.

The goal of the game is to get the most points. Acting as the titular scavengers, players dig through garbage cans to unearth tasty morsels and shiny treasures. As they acquire goodies from the trash, they may either spend these cards to take their listed actions, or they may “stash them in a tree” to try to score points. At the end of the game, each item is scored individually, and the player who has stashed the most copies of it gets a number of points. (Some items also offer points for second- or third-most copies.)

On a player’s turn, she begins by rolling the die and taking the token corresponding to the result. When she claims a token, she has the option to either roll again to try to get an additional token, or to stop and resolve the ones she has. Each token the player possesses grants her an action, so it is desirable to have many of them, but if she ever rolls a result for which no token is available (i.e. A result she has already rolled), she busts, draws a card, and ends her turn.

If the player decides to stop rolling, she may then execute each action for which she has a token. Here are the descriptions of the six actions:

The actions are very straightforward, but I’ll elaborate a bit on stashing cards. If a player chooses to stash a card, she sets it aside, face-down, to be scored at game end. Doing this means she will not be able to use the card for its action, but will instead try to collect the most copies of it to score points. This set collection mechanism may be the most important part of the game, because it’s ultimately how the winner is determined.

Additionally, the player may spend any of number of cards from her hand to use their abilities. Most of these actions are resolved on players’ turns, but some may be played out-of-turn, in response to other actions. Here is a sampling of some of the cards:

Cards that can be stashed bear their point values in the upper-left corner. Note that the Doggo has no point value, because good luck trying to stash a dog in a tree, you mangy raccoon.

When the deck runs out, the game ends. The player with the most delicious/shiny stash wins.

I enjoyed Trash Pandas. It’s a very amusing game. If it weren’t for the delightful theme and the AMAZING Kwanchai Moriya art, I might have been a little less smitten, but these take it up an extra notch for me. It’s really fun, as long as everyone is okay with a little bit of chaos and interaction. The push-your-luck element of rolling the die for actions works surprisingly well. The longer a player rolls, the greater the odds of failure, but also the greater the reward potential. I’m frankly surprised more push-your-luck games don’t use a similar system.

The card-play reminds me a bit of Piece o’ Cake/New York Slice. While Trash Pandas doesn’t have those games’ “You cut, I pick” mechanism, it has a similar idea of using the cards for one ability, or putting them aside to try to score points in a set collection race.

Trash Pandas is easy to learn and understand; it feels just right for what it is. This is the kind of game that will evoke laughter from players, always a big plus for me. It plays pretty quickly, and its small footprint makes it a great choice to pack in a suitcase, purse, or even pocket.

While I don’t recommend that you yourself go digging through your neighbor’s trash, I do recommend you play a game about it.

A review copy was provided by Red Rook Games.