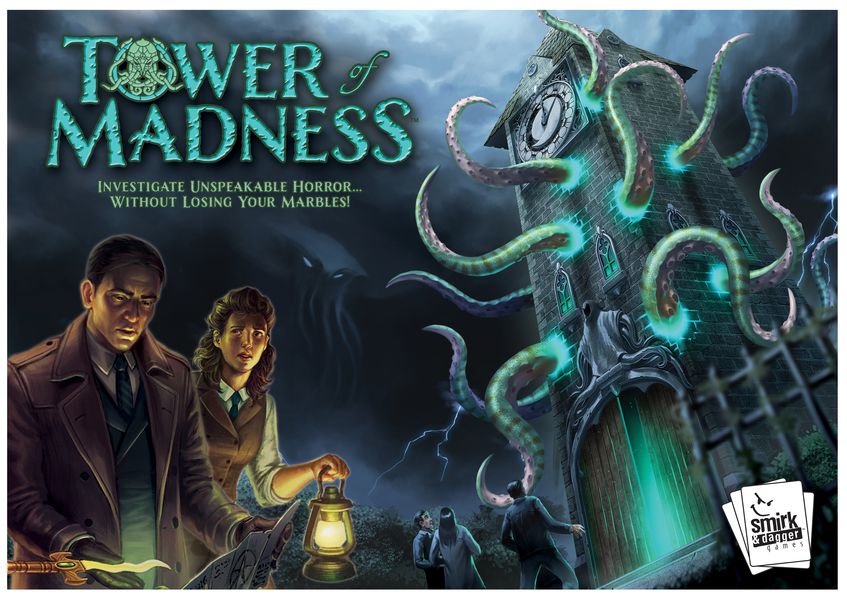 Tower of Madness is a sort of “game-ified” spin on the childhood classic KerPlunk. In this game, players take turns rolling dice to investigate areas threatened by Lovecraftian monstrosities. Should an investigation fail, the player has to pull a plastic tentacle piece from the tower (think pick-up sticks meets Cthulhu). If the marbles inside the tower fall out the bottom, the player can earn a benefit… or possibly go insane.

As with any Lovecraft-themed game, Tower of Madness deals with alien horrors and the occult. Unlike say, Eldritch Horror, however, Tower of Madness is very silly and doesn’t take itself too seriously. If you don’t mind some spooky imagery, it’s pretty harmless.

Tower of Madness is one of those games with an eye-popping table presence. Combining dice rolling and dexterity with a bit of Smirk & Dagger’s classic “take-that” ethos, it’s ridiculous in the best way.

In this game, players are investigating the occult in an attempt to stop Cthulhu from “fhtagn”-ing the world. To begin, they put together a large, upright tower and fill it with rod-like, plastic “tentacle” pieces. These bits are positioned such that they extend through the tower, out the opposite side.

The tower is then filled with colored marbles which will sit, perched precariously atop the rods inside.

Each player receives a tableau board, a character card, and two Spell cards. A deck of location cards is placed in the middle, and the game begins.

Each round, the players investigate the topmost location of the deck (the Clock Tower, in the first round). One at a time, they take turns rolling five dice. A player may re-roll multiple times, but with each roll, she must “lock” a die on her tableau. In order to perform a successful investigation, she must end her turn with a gate, a heart, and a mind icon locked on the appropriate spaces.

If these requirements are met, the sum of the numbers on the two remaining dice determine her score for the current round. As an example:

This player was able to lock the three required icons. Looking at the other two dice, then, we see that her total for the round is 9 (6 + 3).

The first player to successfully investigate the current location places a yellow marble on her tableau to mark her score (as shown above). If someone later meets or exceeds this score, that player takes the yellow marble and places it on her own tableau. At the end of the round, the player who possesses the marble receives the location card, earning its indicated points.

Alternatively, if the player fails her investigation—that is, if she does not roll a gate, a heart, and a mind icon on her turn—she must pull a tentacle from the tower. Should one or more marbles fall out of the tower as a result of her pull, she resolves their effects, as described below:

That’s basically all there is to it. I’m glossing over a few minor rules, but the game essentially comes down to rolling dice and pulling tentacles from the tower.

Examples of Location cards. Each has a point value, and most have a special, round-specific rule.

I don’t think anyone asked for “Cthulhu KerPlunk” (CthPlunk?), but Tower of Madness is an interesting game nonetheless. Like I said in the beginning, its visual appeal is off the charts; if you play this game in a public place, people will stop and watch, I guarantee it. Pulling the tentacles is a ton of fun, and it infuses the experience with Jenga-like tension.

I like that the marbles are a mixed bag. Some are worth points, so failing a roll is not necessarily a bad thing—it may even award a sizable bonus if a bunch of marbles fall! On the other hand, the tower might dispense “bad” marbles, so players need to weigh their options.

The dice-rolling system is very cool. It’s mechanically basic, but the notion of set collection where the leftover dice determine the score is really clever. I am honestly surprised more games haven’t used this idea.

Tower of Madness is not without issues, however. For starters, it can take a while to set up. The first time we played, the tower came apart as we put the marbles in, which made stuff spill all over the place. The dice also came with some glue residue on them. It wasn’t a huge deal—it came off easily with soap and water—but it’s worth mentioning.

The gameplay moves along at a nice pace, but a few oddball rules slow it down slightly. For example, if a player rolls exactly two 5s in a single roll, she gets to take a special token from the center which grants her a bonus. The tokens are helpful, don’t get me wrong, but the rule just seems a bit random, especially since no other result has a special action like that.

Additionally, players will need to reference their spell cards periodically, which can inhibit the speed of play if they have many to consider. I personally have had close to ten spells at a time, far more than I could realistically use.

Spell cards have a “Sane” and an “Insane” ability, depending upon a player’s status.

In sum, Tower of Madness is a memorable game, but I’m not sure it has long-term replayability. It’s a zany concept with potential for humorous moments, but the overall charm might wear off after a couple plays. That said, I certainly wouldn’t pass up the chance to play it again down the road.

A review copy was provided by Smirk & Dagger Games.