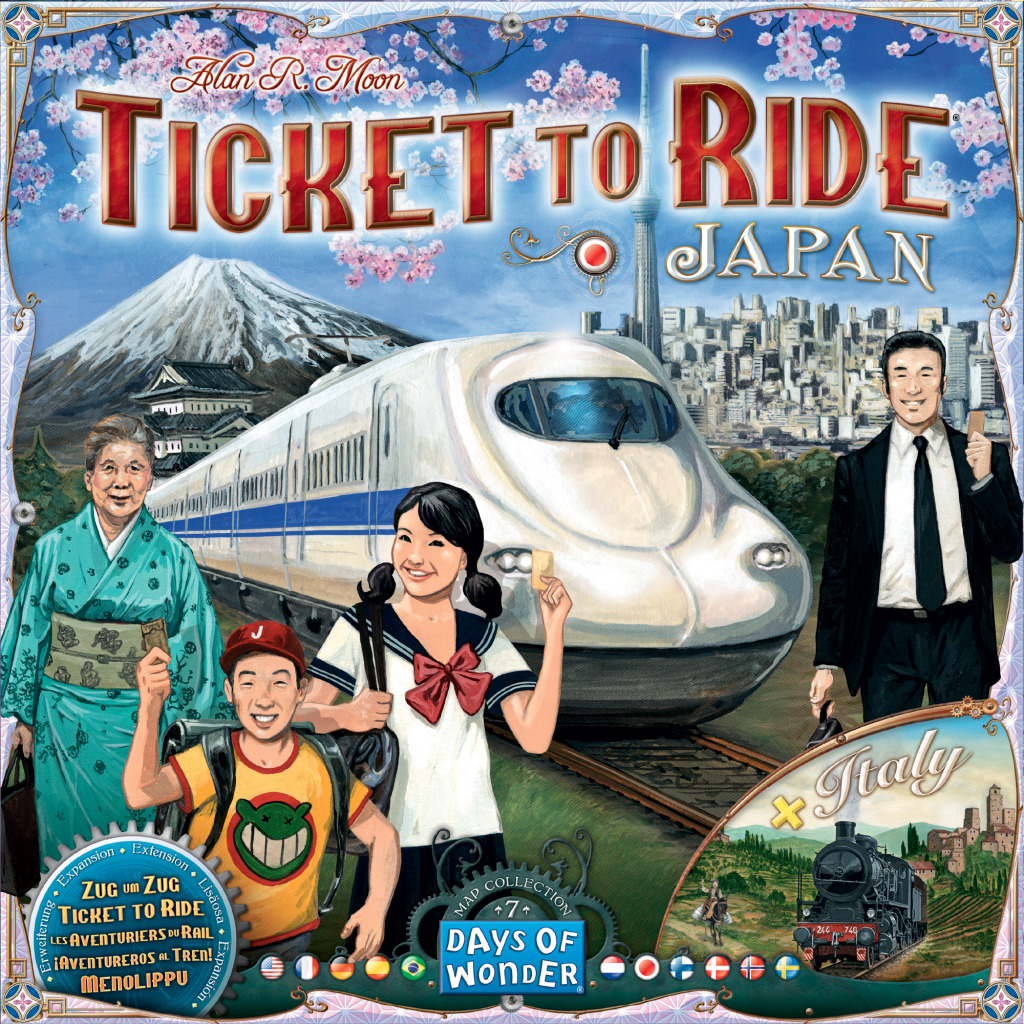 The typical dream for a board game designer is to create a game that becomes “evergreen”: it sells consistently for many years, warrants many expansions, and ideally paves the way for board game design to be a full-time career. A great example is Alan R. Moon’s Ticket to Ride, which is still popular 15 years after winning the Spiel des Jahres.

Days of Wonder has since consolidated expansions into a line called the Map Collection, which is exactly what it sounds like:  a series of alternate maps with alternate rules. It’s a great way to make Ticket to Ride modular, although the maps vary in quality. So how do the Japan & Italy maps compare? Let’s look!

Most of the Map Collections that have two maps have a “marquee” map that the expansion is named after, and here “Japan” is in the forefront. While the map looks quite strange, it’s because of a new, simple, brilliant rule. Most of the grey routes are “bullet train routes,” which require you to place a white bullet train piece from a general supply, rather than one of your own trains. These routes can be used by anybody. That might make the seem unwise to pursue, but there is a majority bonus for completing them, and a harsh penalty for not doing them at all (-20 points!).

This is a brilliant new mechanism. Even though it is a simple, easily added change, the implications are numerous. Players have to carefully consider the likelihood of helping others with bullet train routes, and this idea of “coop-etition” is a new feeling in Ticket to Ride, a frequently cutthroat game. It also makes the game fast and snappy, because it’s just easier to get routes done faster, and each player only has 20 (!) trains, instead of the usual 45. A four-player game over lunch only took us 40 minutes at a brisk pace. It also just feels good to get a bunch of routes done easily and rack up that score. This may actually be my favorite map of the 12 maps in the map collection. Much like India, it gets a lot done with a little, but it feels freer instead of restrictive and cutthroat, while still remaining tense.

On the other side of the game board is the Italy map. This is a classical map, with yet another variation on Ferry routes. There is a separate deck of Ferry cards that can be used to cover “Wave” symbols more efficiently, and one of these can be drawn instead of 2 Locomotive cards. There is also a new endgame scoring bonus, which is based on how many different regions of the map you connect together. I like the bonus, and I’m ambivalent about the Ferry cards.

This map is not bad. It’s Ticket to Ride, after all! The original USA map is still fantastic, and this isn’t much different. But it’s also just more of the same. My favorite maps are when minor tweaks with minimal rulesets have a major impact. I don’t love it when Ticket to Ride ends up with a huge ruleset, like on the Team asia or UK maps. This map errs on the other side: it has minor tweaks and minimal rulesets, but they have minimal impact.

Now, some people will just be excited about the geographical region; I know a couple who love Ticket to Ride and honeymooned in Italy, so they loved it. But disregarding that, there’s no real reason to bust this out over the USA map. If I do bother to get this out, I’ll likely flip it over and play Japan instead. Now, if someone wants me to play Italy I will do so gladly, and have a great time. There’s just nothing new to see here.

Overall, it’s a really good package, with only a few minor downfalls. It’s a bit pricey and the box is way too big (though you could combine some map packs into this box). While the Italy map is not super exciting, I’m still happy to get two maps instead of one, and Japan is one of the best maps they’ve ever done for Ticket to Ride. If your group still plays Ticket to Ride regularly, then this is an expansion worth getting.

Thank you to Asmodee North America for providing a review copy of Ticket to Ride Map Collection 7 – Japan & Italy.