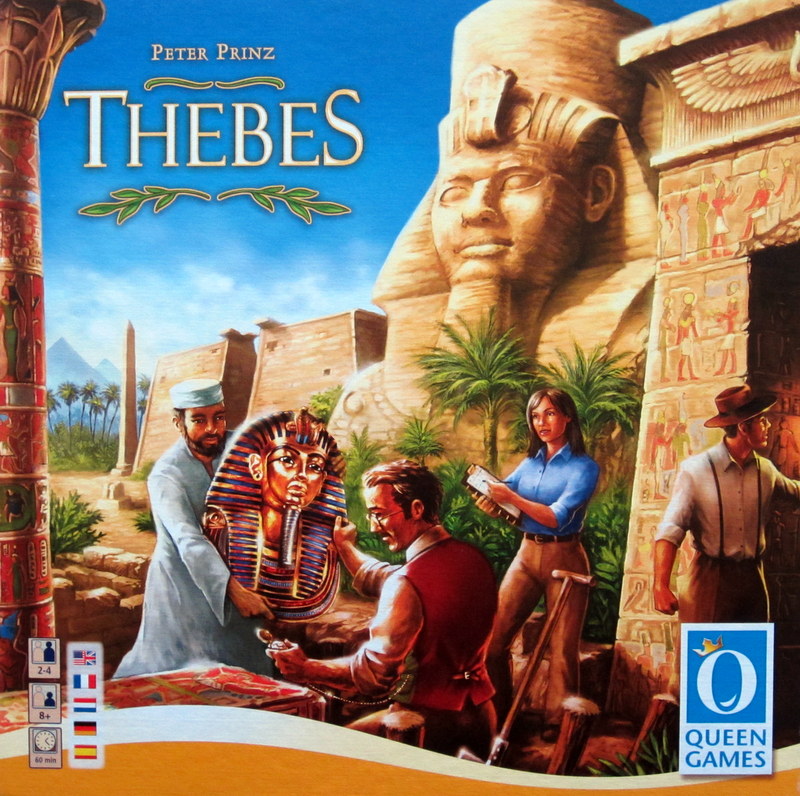 Thebes is a popular game of archaeology for two to four players. Published in 2007 by Queen Games, Thebes cleverly combines theme and mechanisms to create an immersive gaming experience.

I’ve heard the following used to describe the difference between Euro-style and American-style games:

This is a bit of an oversimplification, but I think there’s a kernel of truth to it.

Thebes is an example of a Euro game that manages to excel in both theme and mechanisms. It is centered around early-1900’s archaeology, with two to four players racing to uncover the most spectacular ancient relics. Everyone wants to be the first to excavate the archaeological dig sites, but in order to be successful in their efforts, they must first research and prepare so they know where to dig!

The game board is split into two areas: the northern cities, where players can research, increasing their chances of finding artifacts, and the southern cities, where the actual excavations occur. Around the outside of the board is a time track, which players use to determine turn order. Utilizing a Patchwork-style system, the turn order does not pass to the left, but rather to the player whose time token is the farthest behind on the time track. This means a player might be able to take several turns in a row, depending upon how far back he is. Lastly, the board features two areas where cards are displayed. One is for research cards, the other is for exhibition cards, which I’ll get to later.

Players begin the game in Warsaw, in the northern half of the board. Four research cards are displayed in the on-board tableau, and play begins. A player’s turn sequence is simple: move and take one action.

For movement, a player can travel as far as he wishes, but each move costs him one time point. This means every city he enters advances his time token one space on the time track.

When a player stops moving, he must take an action. Early on in the game, this will usually involve taking a research card. Each of these cards features a specific city, which a player must occupy in order to take its corresponding card. Research cards provide players with knowledge of one of the five excavation sites (they are color-coded, so green knowledge helps with excavations at the green site, etc.). Thus, on a player’s turn, he might travel to Moscow and take a Moscow research card that grants him two orange knowledge points. The cards also have a time cost, so a player’s time token moves when he travels and when he purchases a card.

After a few turns collecting research cards, players may wish to perform an excavation action. This is where the game really shines. Each player has a cardboard dial full of numbers. Based on the amount of knowledge a player has in a particular color and the amount of time he’s willing to devote to his excavation, the dial will display a certain number. This number represents how many chances he will have to find relics. Basically, the more research he has done and the more time he’s willing to spend excavating, the better his chances of success.

When performing an excavation, the player moves to one of the five southern cities, advancing his time token as normal, and takes the draw bag of that city’s color. Each draw bag begins with thirty circular tokens in it. Fifteen of these feature relics are varying values, and the other fifteen are blank, representing dirt and shattered dreams.

Referring to the number on the excavating player’s dial, he may draw that many tokens from the bag. Once he has finished drawing, any relics he has found go into his play area to be scored at game’s end. Any dirt tokens go back in the bag and may be drawn again later by other excavating players.

A little ways into the game, exhibition cards will start to appear. These cards represent players showcasing their finds in a museum. Exhibition cards bear two or three token colors and a specific city. If a player possesses a relic in each of the listed colors and moves to the indicated city, he can perform an exhibition action, which scores him extra points.

At the end of the game, players total up all their points, and the person with the most points is the winner—I’m glossing over a few smaller things, but that’s the general overview.

In so many ways, the archaeology theme is a perfect match for Thebes’ mechanisms. Drawing tiles from a bag is a great abstraction of an actual excavation as it literally has players digging for hidden treasure. It’s thematic that an archaeologist who has done his research will have a better chance of success, and also that the odds of finding relics decrease every time someone uncovers one. The mechanism of displaying ancient treasures in museums provides a secondary objective that fits with the theme and provides an extra bit of strategy. The archaeology flavor is so congruent with the gameplay that it actually helps new players understand the rules.

There is a fair bit of luck in Thebes, a fact that might turn some people away. One well-researched player might come up with nothing after ten bag draws, and his opponent might find the most valuable relic on a single, improbable pull. This kind of thing can happen, but by using the player aids detailing the token distributions, players can always know their relative odds of success.

Thebes is one of the best, most thematic Euro games I’ve played. It is the perfect marriage of mechanisms and theme. It is very easy to learn and it only takes about an hour to play. As it happens, it also contains my favorite board game rule: dirt tokens go back in the bag after an excavation. This just makes sense in the context of archaeology.

Thebes scales quite well between player counts. The game length remains fairly consistent as the time track is adjusted to suit the number of players. I think fans of heavier Euros might find Thebes lacking, mostly due to the inherent luck of drawing tokens from a bag. However, fans of family games or games with strong themes might really enjoy this one. It’s great, and I highly recommend it.