Review – The Wild Beyond the Witchlight 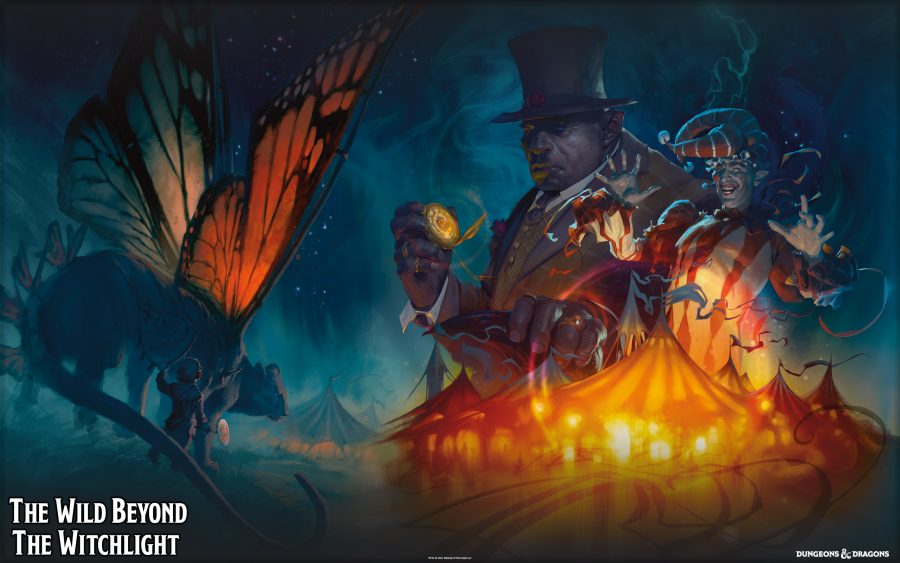 Have you ever wanted to go to a carnival with actual magic? If that amazing plot hook doesn’t grab you, I’m not sure what else will, but the writers at Dungeons & Dragons have again managed to find a great place to let the real world and imagination run, er, wild together. The Wild Beyond the Witchlight starts with the players heading to a Fey-run carnival in hopes of finding a way into another plane so they might right a dangerous wrong. Read on for the review!

During the course of running this adventure, players can run into evil hags, magic spells, unicorns, shadow assassins, intelligent frogs, houses on literal legs, and animated dolls just to name a few. Not to mention the usual possibilities of dungeons, dragons, and their associated items, spells, and inhabitants.

The Wild Beyond the Witchlight (WBTW hereafter) is the latest book from the Wizards of the Coast, and it has a great initial setting. Carnivals themselves always feel imbued with a hint of magic with their focus on food and fun, temporary structures, and here-today-gone-tomorrow attitude. Infuse that with a little bit of D&D magic, and you have a setting that could easily be explored for several, if not one lengthy session by patient adventurers. A Dungeon Master looking to get beyond the setting and into the meat of the book could side-step most of the Witchlight Carnival and move on to the Fey setting in under an hour, but I wouldn’t recommend it. The carnival is easily my favorite chapter, and also the least on-rails part of the whole adventure. The characters are able to wander throughout the carnival grounds meeting characters, winning prizes, and trying to learn more about the carnival’s owners, Mister Witch and Mister Light.

The carnival itself ends up just being the hook and jumping off point to the player’s travels into the Fey Domain of Prismeer, an otherworldly plane of existence ruled by the evil Hourglass Coven. Without giving away too much, I wish that the book focused more on the Carnival than Prismeer, because once players are in the Fey realm it ends up feeling more like a key-fetch to get to the next section, where you have to do certain tasks or quests to get the help of guides or other NPCs. In other words, once you leave the Carnival it feels like an on-rails adventure. Now, a good DM could probably make it not feel this way, but the fact remains you must traverse the three sections of Prismeer named Hither, Thither, and Yon, and make it to one more location in order to successfully complete this adventure. And with all of these, you have to find a guide or mode of transport that can take you from one place to another, which usually brings you into a boss fight first. Making it even more feel like a rail-cart adventure is a character that will literally help you make the initial jump into Prismeer should you fail to figure out how to leave the carnival on your own.

Another small problem I have with all of these books is that they are all designed with level-1 characters in mind. With experience, it might not be hard to adjust for leveled-up characters, but there isn’t a paragraph or chart in these books on how to slide the difficulty up or down depending on character’s needs. I realize that most people are going to more likely be making a new character or starting a new campaign rather than continuing a level-15 warlock that they started years ago, but I wish the tools were there. This book does have a few options for making new characters including Fairy and Harengon (rabbit-folk) races, should you be starting a new character.

That all being said: it has been stated, time and again, that these books and supplements are meant to only add to your game, so if you really like the Witchlight Carnival, but don’t want a Fey adventure where you fight evil hags, there’s nothing saying you can’t leave parts out. There are some great characters and interesting NPCs to meet in WBTW and while it wasn’t my favorite book in recent history (that award goes to Candlekeep) it definitely is a story I would like to dig deeper into, given a chance. If a magical carnival, trips to other planes of existence, and fighting an evil coven sounds like a good time to you, check out The Wild Beyond the Witchlight.

A review copy was provided by the Publisher.

If a magical carnival, trips to other planes of existence, and fighting an evil coven sounds like a good time to you, check out The Wild Beyond the Witchlight.