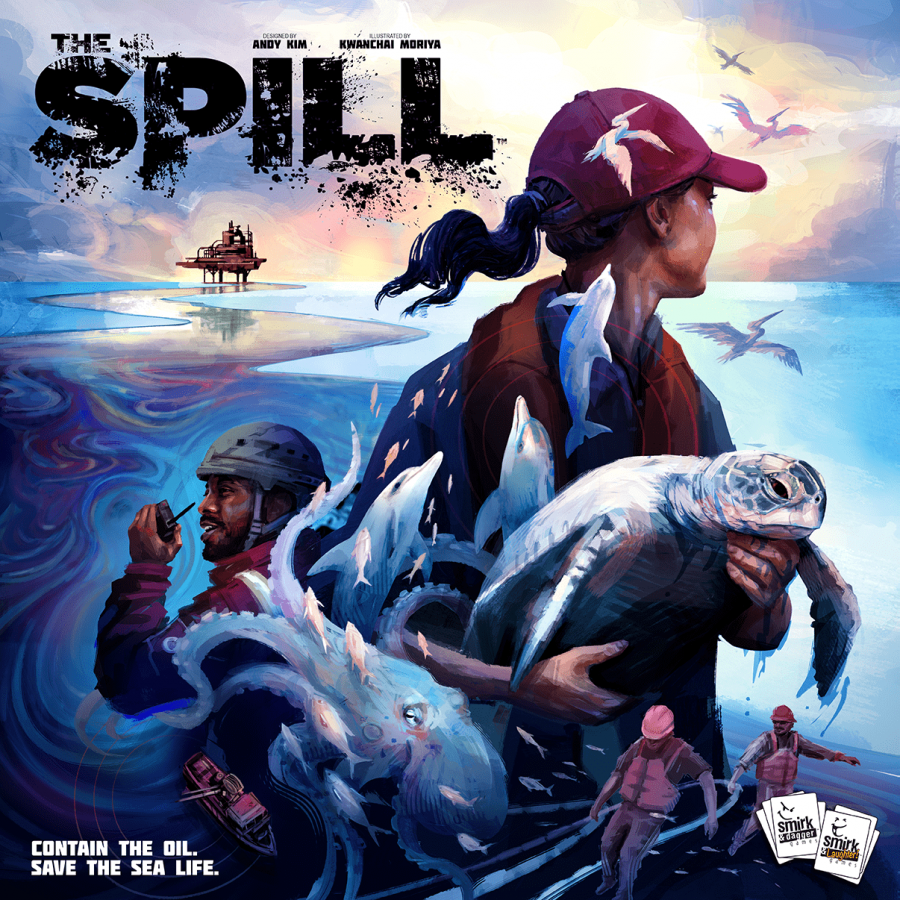 The Spill is a cooperative board game in which players try to manage a catastrophic oil spill. They must work together to contain the oil from flowing, remove what they can from the water, and rescue the imperiled sea creatures. Do you have what it takes?

The Spill is a race against time. After the explosion of an offshore rig, oil is steadily leaking into the ocean and 1-4 players must work together to contain it and avoid ecological disaster.

The game is played on a central board prominently featuring a dice tower in the shape of an oil rig. The board is divided into quadrants, each with 6 sectors corresponding to the faces of a die. At the start of the game, the board is seeded with sea creature tokens, each of which has a healthy side and a contaminated side. All creatures begin healthy-side up.

Regardless of the number of players, 4 of the 8 specialists are used each game. Every specialist has a unique ability which makes them better at some aspect of the game than the others. (Because there are always 4 specialists in use, The Spill tends to be best with 4 players.)

On a player’s turn, they begin by adding oil dice to the board. A “spillout track” dictates how many dice are added, and the player takes that many dice and drops them into the oil rig. Each die will fall into 1 of the 4 quadrants, and wherever it lands, the die gets placed in that quadrant, in the sector matching its result. The die is always placed in the empty space closest to the rig, meaning the oil spreads from the rig outward.

If all 3 spaces of a sector get filled up, a spillout occurs. This ticks up the spillout track, increasing the intensity of the leak and possibly resulting in more dice being rolled in future turns. 6 spillouts on the board is a loss condition, so players always need to manage the oil.

If an oil die gets placed on a space with a healthy animal token, the token is flipped to its contaminated side. (If the animal is already contaminated, it is instead removed from the board.) A contaminated creature must be treated quickly or else it will be removed. If too many animals get removed, players lose the game.

The dice bag includes mostly oil dice, but several blue weather dice are mixed in as well. If a weather die is pulled, it is dropped into the rig as normal, but instead of being placed onto the board, it is resolved immediately according to the weather effects chart. Weather is almost always bad—it does things like increase players’ movement cost or make it harder to rescue sea animals.

Once the bad effects have been resolved, the player can take 4 actions. Actions include:

If the player wishes, they can use up to 2 extra actions on their turn, but for each extra action they take, the following player will have to roll an additional die.

Play continues until either all 3 win conditions are met (win conditions vary from game to game), or until any single loss condition is met.

The core system of The Spill is similar to co-ops like Pandemic, Forbidden Island, and Flash Point: Fire Rescue. Basically, players take turns performing positive actions while dealing with a constant stream of negative effects. It’s the classic co-op formula of “do good stuff while fighting back against the bad stuff.”

This time-tested framework makes for an enjoyable play experience, but overall, The Spill doesn’t feel that innovative. The things it does, it does well, it’s just that I have seen most of them elsewhere before.

The big hook for the game is the oil rig dice tower, which is both cool and thematic. The theme itself is also great—much like Rescue Polar Bears, it feels very relevant to the present day and forces players to sit with the full moral weight of their decisions. The image of a sea turtle covered in oil is heartbreaking, but that’s the point. The Spill is as much a game as it is a call to action for prescient climate issues, and I really respect that.

This game’s production is typical Smirk & Dagger/Smirk & Laughter quality. Kwanchai Moriya’s art is always top-notch, and it really enhances the overall visual of this game. The dice tower works pretty well, and it makes for a good randomizer. It has to be disassembled at the end of each game to fit in the box insert, but thankfully, this is pretty painless to do. The dice themselves are nicely marbled, giving them a shiny, oily look. Overall, The Spill is a great-looking game.

The Spill borrows from a number of great co-ops, resulting in a well-made game with high production value. Mechanically, it doesn’t break new ground, but it nonetheless provides an impactful experience, in large part because of its strong integration of an important, real-world theme. It’s not a game I’ll be playing all the time, but it’s one that I wouldn’t hesitate to introduce to others. If you are a fan of co-ops and/or interested in environmental themes, check this one out.

A review copy was provided by Smirk & Laughter Games.

The Spill borrows from a number of great co-ops, resulting in a well-made game with high production value. Mechanically, it doesn’t break new ground, but it nonetheless provides an impactful experience, in large part because of its integration of an important, real-world theme.