Review – The Quacks of Quedlinburg Megabox 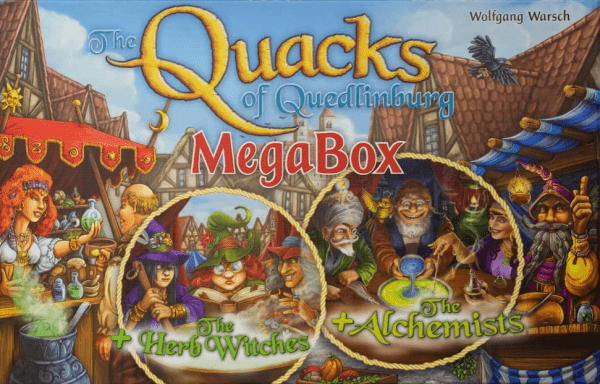 I can think of only a handful games I’ve completely “flip-flopped” on, and Quacks of Quedlinburg is one of them. My complaints about the lack of player interaction and procedural final round are overcome by the great fun of all the luck-pushing and chaos prior to those last moments. Of course, having won the Kennerspiel des Jahres in 2018, Quacks inevitably received two expansions, and now they’re all collected in this “megabox” release. Are the expansions worth the extra price for the megabox? Let’s take a look! The main reason gamers would want a “Megabox” release is to get access to all of the expansions in one place. To me, this basically comes down to two different categories of assessment. First, are the expansions actually good? Do they add to the game? Secondly, is the presentation of the megabox done well?

Regarding the first category, I have to say that I quite like both expansions to Quacks. That being said, I much prefer the first expansion, The Herb Witches. Its main addition is simple: 3 Witches in three different categories (bronze/silver/gold) are added, and each player can use the ability of each Witch once per game. Deciding when to use the abilities is an interesting challenge, and assessing when to go “big” versus when your opponent might actually adds a smidge of indirect player interaction in a game that mostly lacks it. The second expansion, The Alchemists, adds patients for players to treat, but makes the game a bit more complicated, with a new phase and a new track for getting bonuses as you treat the patient. The bonuses you get are actually quite fun, but it’s a bit more rules explanation up-front than The Herb Witches. Neither are very difficult for Quacks veterans, however. And of course, both expansions add new variations for the ingredients, a new ingredient (locoweed), and new Fortune-Teller cards. It is very rare that I like everything in a big box / megabox, but I do here. With veterans, I’m happy to play with all of the materials, all of the time.

That being said, this release fails miserably when it comes to the “presentation” category. The biggest and most obvious issue is the horrendous box size. It’s about half as deep as the original box, and twice as wide. It is a complete pain to carry around, let alone store on the shelf. Everything fit into the original box already, so there was no good reason to create this unholy box size. I feel like it was only done so that people would not complain regarding the original, “why didn’t you just put all of the expansion material in the core box release to begin with,” or to make it feel bigger to charge more. If that was the goal, I feel like they should have instead made this a “deluxe” release and included the various GeekUp bits from BoardGameGeek.

It’s not just the awful box, however. The rulebook is essentially the three rulebooks (base game, each expansion) just stapled together. There’s no complete component list, because each release still has a separate component list in the rulebook. Furthermore, the language is not even consistent: the expansions refer to the “preparation phase,” which in the same rulebook under the base game section, is called the “potions phase.” Furthermore, there are no player aids present in the entire release, and while the steps of the evaluation phase are shown on the scoreboard, there is no listing of each phase in the game on any player aid, component, or even back of the rulebook (which is completely unused!). After the second expansion introduces a new phase (the “essence” phase), there absolutley should have been some kind of player aid to indicate the various phases of the game.

It really is disappointing to see so little care put into the packaging and rules, because this could have been a 10/10 release that I would be shouting from the rooftops. That being said, it’s the cheapest way to get all things Quacks (promos notwithstanding), and all of the content is quite excellent. If you already own the base game, however, I would simply pick up the expansions individually, and don’t feel like you’re missing out when you see someone else with a Quacks-labeled, problematically large rectangle under their arms.

This is the best available version of an excellent game, even if it could have been presented much better.