Amnesia meets Alone in the Dark 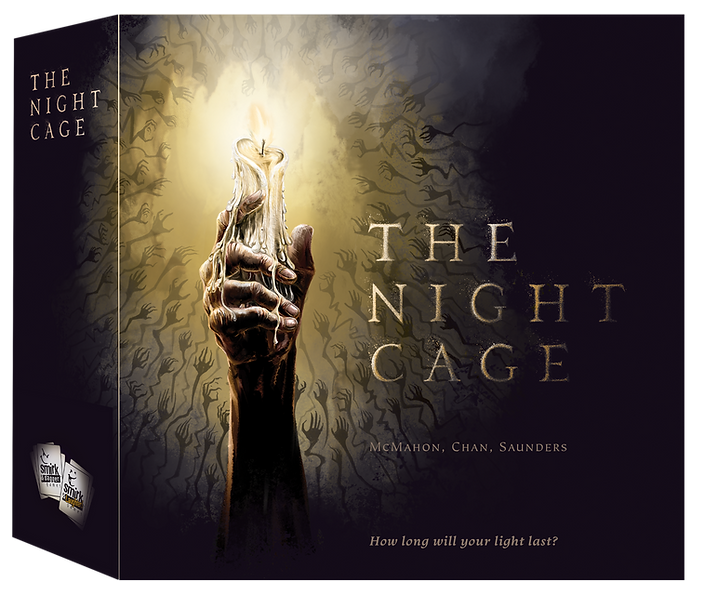 “You awake to discover that you and several others are imprisoned within a pitch-black labyrinth. The rough-hewn, stone passages provide barely enough room to crawl through and the walls claw at your skin as you pass. Equipped with nothing but dim candles, you must work together to explore the maze and escape. Distressingly, the weak candlelight only illuminates your immediate surroundings. Worse still, you’re beginning to suspect something else is moving in the suffocating darkness – just beyond the flickers of your candle.

And it despises the light.”

Now that’s how you do an introduction!

Players will face off against various monsters in the game. With no way to fight back, players must move carefully to avoid losing tiles. There is no health or damage to track. The monsters are all dark, with an evil ethereal sense to them. Many have tentacles, or extra arms, or strange skulls. After a monster attacks and tiles are discarded, most of them leave the game board.

The Night Cage is a fully cooperative (no traitors), 1-5 player game that drops the players into a pitch black maze that always changes just out of sight, and forces them to contend with monsters that they have to run from. Players move around the board attempting to collect keys and make it to a gate together. Each player must reach the gate with their own key or the entire group loses. In the basic game, players will only have to contend with 1 kind of enemy, the Wax Eaters, but the advanced game has 6 different enemies ranging from the Pit Fiend that ruins the maze by turning everything in its diagonal path into pits, to the Dirge that covers a quarter of the board when it finally comes out. Players will do well to realize the puzzle aspect of the game and carefully consider their options when moving: for instance if you stray too far you might not make it back to your fellow captives in time, but hang around too close and you may accidentally draw a monster tile that entraps or hits yourself or others.

Play starts with each player placing their starting tile and the 2 tiles that connect to it. Due to stacking the first 8-10 tiles with harmless path tiles as per the setup, none of the first tiles drawn will be dangerous. After that, any tile revealed could be an enemy, gate, or a key. Some tiles will even have a decayed look to them, including the key tiles – these will crumble and flip over, turning into pits the round after someone has stepped on them. In this way players have to steer clear of keys they aren’t picking up, while at the same time trying to keep them illuminated for their teammates. To further obfuscate players, they can’t enter the same space as one another unless it’s a Gate Tile. Players may pass keys, or step into adjoining tiles to help re-light someone’s candle. Anyone attacked by a monster has to discard 2-3 tiles and flip their player card over to the Lights Out side, which makes them unable to stay put (too panicked), and they can only illuminate the tile they’re on until someone helps them out by relighting their candle.  You can also fall into the pits, either accidentally or intentionally to avoid being hit, but it comes with the chance that you might fall on a monster instead of escaping.

Even in the basic game, players will find that without strategic play, they will quickly run out of tiles. The tile holder is a great-looking tower that looks like a giant candle, slowly dwindling down as you run low on tiles. You must also do your best to communicate your actions so that you don’t inadvertently leave someone’s key in the dark or drop a monster in your whole team’s path. If you want to increase the difficulty, the rules even suggest only letting players talk to one another when they’re in the same illuminated passage. The game also makes several suggestions if everyone wants to increase or decrease the difficulty, mostly by increasing or decreasing the number of enemies. There’s even 3 extra Omen Tiles (for summoning the Dirge) for “future content.”

Overall ,The Night Cage is a lot of fun with any player count. I would highly recommend it for anyone looking for a thematic, horror-inspired tile-laying game that uses the dark and dwindling resources instead of jump scares or blood. Both tile-laying game fans and thematic, scary game fans will find a lot to like here.

Both Tile-laying game fans and thematic, scary game fans will find a lot to like here.