Review – The Lord of the Rings: The Card Game (Revised Core Set) 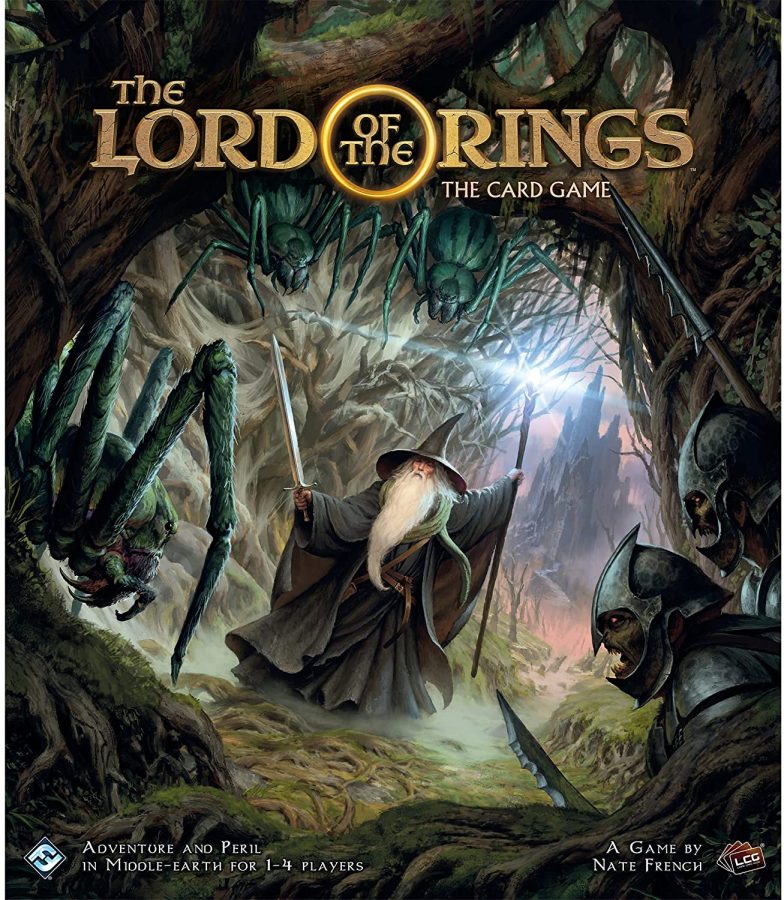 The Lord of the Rings: The Card Game first game out back in 2011, but they recently released a revised core set, which features enough cards for 1-4 players to begin their journey (the original only supported 2 players). How does it compare to its cousin, Arkham Horror: TCG, and does it still hold up today?

FFG plans on releasing revised expansions for LotR TCG as well, with the main selling point being an actual campaign mode to play through, rather than a bunch of different scenarios.

During a given round, players will play cards, assign their heroes to fight enemies, explore locations, defend against enemies, or progress the quest. Most heroes can only be assigned to 1 thing, so maybe you want to progress the quest a good chunk, but there’s 3 or 4 bad guys out there that will attack you, so you’ll need to save a couple of your heroes to defend against the attacks and slay these aggressors.

Why would you waste a hero defending when you could be attacking? Undefended attacks are a good way for heroes to die, and once dead, always dead, be it scenario or campaign. You’ll also need to commit enough heroes to the quest so you don’t increase your threat level, which essentially works as the game timer. It’s a fun, puzzly balancing act.

This game is all about maximizing your heroes’ output for the specific round you’re on, and what’s great about LotR TCG is that there’s usually a couple of good options, which means there’s lots of opportunity for strategizing just how you want to maximize your heroes’ output each turn. On the other hand, during the enemy round, some enemy cards destroy all of your perfectly-laid plans, which can be very frustrating after you’ve thoroughly mapped out your turn. And sometimes there’s nothing you can do about it.

There are great gaming moments to be had here: plotting carefully and succeeding at all your maximization, drawing a bad enemy card and still being able to pull off a progressive round, having to draw thrice as many enemy cards as usual because of some bad combos and then still snatching victory out of the jaws of defeat because of that card you played during the first round thinking it might be helpful later.

The scenarios also add to the great gaming moments. I won’t spoil anything, but the 3 scenarios are distinct and a few in particular do a fantastic job of marrying gameplay and theme. A side note about the scenarios though: 1 of them is almost impossible to defeat without a lot of luck, and that’s a huge issue I have with this game.

For all your deck-building opportunities, for all the cool things your heroes and cards can do, there’s too much luck here to feel like you’ve got a fighting chance when your luck is poor. You have 50 or more cards in your deck, and you’re likely not to see many of them during a given scenario, even the ones you have 3 copies of. Too many times it felt like we were losing a scenario, not because we were strategically inept, but because we didn’t draw the right card(s), and that’s frustrating, especially for a game like this where I love the theme and the rest of the design.

The game art won a couple of awards when it originally came out back in 2011. It is inspired more by the books than the movies, and I wouldn’t have it any other way. The card stock will hold up to multiple shufflings, which is important for a game like this, and the cardboard chits do their job well. The box insert is solid, and leaves room for some extra cards via expansions, but I wish they would have included some of those bigger cards that can separate and identify side-laying decks. I ended up cutting out pieces of cardboard myself, but this is Fantasy Flight Games, so surely they could have printed a few dividers so it’s easier to identify which cards are which.

The game set-up isn’t terrible (5-10 minutes), unless your cards are disorganized. However, it would be difficult to have more than 1 campaign going at a time, so plan on playing through the whole story with a single group. If players are okay with a 5-6 hour game night, they could conceivably play through all 3 scenarios in a single evening.

The Lord of the Rings TCG vs. Arkham Horror TCG

If you’re going for best campaign gameplay, Arkham Horror wins, and it’s not close. LotR’s campaign is good, but it’s difficult. That’s not necessarily a problem, but if you lose a scenario, you have to replay it until you win. What’s more, the core set of LotR doesn’t give you many customization options for your deck, so you’re stuck with basically the same deck trying the same mission over and over. (If you pick up some small expansions, you can swap cards, but not heroes, before you retry the mission.) There’s different strategies that can help, but sometimes success comes down to the luck of the draw. Success in Arkham Horror can also come down to the luck of the draw, but at least you progress and you don’t feel like you’re manifesting the definition of insanity (trying the same scenario over and over while expecting different results).

Arkham Horror’s story is also integrated into the gameplay better than LotR, which is saying something because LotR does a fine job. Moreover, Arkham Horror does upgrades better than LotR because in Arkham Horror you can choose which cards you gain, whereas in LotR the scenario tells you what your reward is. It’s great that LotR has a campaign feature now, but at this point, early in the revised LotR‘s print run with no expansions to speak of, Arkham Horror’s campaign is still noticeably better.

As far as general gameplay, LotR feels much more controlled and strategic, especially because you don’t have the luck factor of pulling tokens out of a bag for skill checks. LotR allows for more player control, notably during combat, and I like that in a game… but even so, there’s still too many times luck comes through and breaks you in LotR, which feels inconsistent for a game that offers at least the illusion of control.

Both of these games feel best at 2 players, but in LotR some scenarios are next-to-impossible to win with 2 players. It seems like LotR gets easier with 4 players. Both games are difficult with 1 player, but LotR is nigh impossible at 1 (unless you’re controlling 2+ hands), so again, Arkham Horror takes the cake.

Despite my complaints about the luck in a game that feels very controlled and strategic, the biggest downer here is the price tag. Sure, you can play with 4 players, but this game is most fun with 2, which makes for a pricey core set that only includes 3 scenarios. Yes, the scenarios are very good, but there’s still only 3 of them. That doesn’t mean don’t get the game, but find a used copy or try it before you buy it if you’re on the fence about liking it.

LotR TCG was a very good game when it came out in 2011, and it’s still a very good game today. Unfortunately for LotR, Arkham Horror TCG is out now, and it’s just a better all-around game. However, LotR has a great theme and real good gameplay. It’s awesome to finally see a campaign system set up for it, and a scoring system too, which makes a lot of sense for this game and adds some replayability as you try and beat your old score in different scenarios. It’s early in the lifespan of this new version pf LotR, and I anticipate some juicy expansions, so there’s still time for it to make a run at Arkham Horror, but for now, Arkham Horror TCG reigns supreme with the One Ring slipped on its 4th tentacle.

Arkham Horror TCG is still better, but LotR: TCG is a solid game that could become great with expansions.