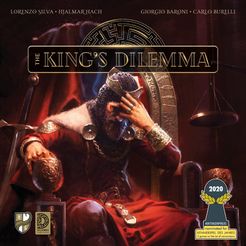 The King’s Dilemma by Horrible Guild Game Studio is the forerunner of their line of Dilemma Card System games. Is it a fun experiment that lacks the practical balancing of a tabletop stalwart like Dominion, or is it a glorious step into a new type of tabletop games like Pandemic Legacy was? In short, it’s both.

This game is not meant for children. While we encountered nothing photographically explicit, the descriptions of violence on some cards is gruesome. Nothing is sexually explicit either, but there is talk of brothels and sexual religious activity. There’s also heretical religion and mention of drugs and alcohol. However, none of it felt gratuitous to me. I expect there will be differing opinions, but the occurrences I encountered fit the story well and did not breach into the space of “vice for vice’s sake.”

[Note that this review is based on a full playthrough of the entire game. I have done my best to keep this review spoiler-free, only including details from the first game.]

The King’s Dilemma is unlike any game you’ve played before. It’s a campaign game because it takes many games in order to experience the full story; it’s an RPG game because each player has a House with secret goals and bonuses and ideals; and it’s a legacy game because players place stickers, throw cards away, and possibly even throw the whole box away when you’ve finished the campaign because The King’s Dilemma is not replayable (unless you buy a new version of it).

The core mechanic that keeps the story going in The King’s Dilemma involves a starting deck of dilemma cards and over 70 envelopes. As players play through the dilemma cards, they will be instructed to open new envelopes and add their contents to the dilemma deck. The new envelopes will continue the story of whatever the players chose. There are many branching storylines, and during my group’s playthrough, we opened around half the envelopes, so no 2 campaigns of King’s Dilemma will be the same.

Before the first game, each player will choose a House screen which they will use for the entirety of the campaign. During each game of the campaign, players will play through a single king’s life and will try to manipulate the Kingdom of Ankist to their House’s advantage. My group experienced 15 of these 30-90 minute, interactive, agenda-pushing games.

Turns are fairly simple. The leader will draw a dilemma card from the bottom of the dilemma deck and read the story text aloud. There will be a question at the end of the card, and players will vote aye or nay. Discussions and bribes are encouraged. Starting with the leader, players will place power (or pass) on whatever option they want. The leader token is passed to the player with the most power, and play continues until the bidding gets back to the player with the leader token. The leading player on the winning team then flips the dilemma card, reads the outcome, and applies the necessary changes to the game board.

So yes, the discussion and the bidding is fun, but the outcomes are what really matter for House and resource card goals. The dilemma cards usually list potential outcomes, but players must also deduce what far-reaching effects may come because of their choice.

Outcome example: The nays have it, and moral drops while wealth remains high. Moreover, a new envelope is opened that contains a rebellion storyline. The peasants were upset about the king not rebuilding their windmill, so they have begun their own militia and are now wreaking havoc across the countryside!

The dilemmas provided some of the best tabletop experiences I’ve ever had. The interaction with players felt not only fun, but also meaningful, because players never knew when they would be opening a new envelope for a new storyline. Moreover, using callbacks to try to convince people to vote a particular way (or just make jokes) was so thematic because that’s what real king advisers would have done too!

The art in this game is very good, and the pictures on the back of dilemma cards sets the tone for what dilemma the players are about to face. The components are also good; nothing special (cardboard tokens and player screens), but they do their jobs well and certainly don’t feel cheap. The sticker sheet makes sense and the envelopes are fun to open when they come along. The map and the lore players encounters are also wonderful and help make the Kingdom of Ankist feel like a real place with real histories.

I don’t want to spoil the endgame, but it did not disappoint, even though many of us felt like it would because how can an endgame do a game like this justice? Somehow, it felt perfect, and my group spent over an hour cutting deals, crunching numbers, and planning betrayals.

The 3-5 player count suggestion is a bit misleading; 5 players is definitely the best. Maybe 4 could be as fun, if you had 4 really engaged gamers, but 3 would simply not be enough to make things interesting. The game allows for different kingdoms to join at different times, letting some other kingdom come in if someone can’t make it to game night, but for the fully satisfying campaign experience, I highly discourage this.

As much as I’ve peacocked this game, it does have its flaws. There are games that are unbalanced, where certain Houses start the game with more power or coins than others, and sometimes it feels like you can’t do anything to win because the dilemma cards don’t help or hurt you so you feel as if you have no dog in the fight. The rulebook is also a chore to read and more confusing than it needs to be in many places.

I sorely wish the publisher had included a quickstart sheet that walks you through the steps to setting up games and cleaning them up so players didn’t have to go through the 4+ pages of the rulebook when setting games up and tearing them down. A double-sided reminder sheet would have been wildly helpful, especially because it was sometimes months between plays for our group, and some nuanced rules were forgotten during that time.

However, as a huge fan of Choose-Your-Own-Adventure novels, The Warlock of Firetop Mountain, and stories in general, I loved The King’s Dilemma. Some of my fondest tabletop memories involve my King’s Dilemma group. The betrayals, the discussions, the comebacks, the scumbaggery, the trolling, and the “you want to support cannibalism!?” all make this game well worth it for me, despite it’s occasionally clunky and unclear rules and the real possibility of imbalances.

If you’re able to get a group of 5 engaged gamers together and have everyone commit to finishing this game and showing up at game nights, The King’s Dilemma could be one of the best gaming/fellowship experiences you’ll ever have. It’s certainly not for everyone, so if it doesn’t sound interesting, don’t worry about it. As for me and my House, we will anxiously await the arrival of the upcoming Queen’s Dilemma.

If you’re able to get a group of 5 players committed to finishing this game and showing up at game nights, The King’s Dilemma could be one of the best gaming/fellowship experiences you’ll ever have.