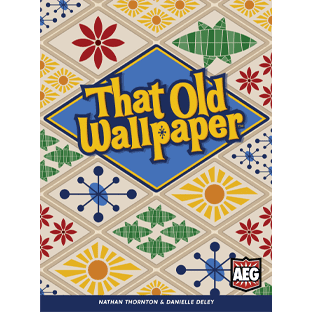 That Old Wallpaper is a game about reconstructing memories. Everyone remembers that hideous 1970s wallpaper that used to be in their grandmother’s house… let’s take a trip down memory lane!

In That Old Wallpaper, 2-5 players recall the vibrant decor of an old house. The goal of this game is to earn the most points, and points come from creating a colorful tableau of cards.

Each player begins with a deck of cards numbered 1 to 10. From their deck, everyone draws a starting hand of 5 cards, which they will use to acquire wallpaper cards.

Wallpaper cards are divided into 4 sections, each showing a pattern. As players gain wallpaper pieces, they create personal tableaus in which they try to match up like patterns.

To play a round, someone first deals out columns of cards equal to the number of players. By default, each column has only 1 card, but some cards are marked with a red oval—when drawn, these indicate that an extra card should be added to the column.

Once the columns have been dealt, everyone chooses a number card from their hand and simultaneously reveals it. The display of wallpaper cards has a designated low end and high end. Players each take the column of cards corresponding to their number, relative to the other players’ numbers. This means that the person who plays the lowest number takes the column on the low end of the display, the person who plays the next-lowest number takes the second card in line, and so on.

If multiple players play the same number, their cards “collide.” To resolve this, they refer to a line of tokens in the player colors. Among the tied players, the person whose token is earliest in the line breaks the tie. That player chooses a column to take from the contested columns. The remaining tied player(s) does not take a column, but instead gets a wild card that can match any pattern. Any unclaimed columns remain in the display and get added to in the coming round.

As players build their tableaus, their cards do not need to match up perfectly. However, they will earn points for each match they make, so when possible, it’s good to line things up.

The game lasts 18 rounds, after which players total their scores. While the bulk of points come from matches, there are a few other factors that can influence the scores as well, including a set collection aspect. The player with the most points wins!

That Old Wallpaper is essentially an abstract card game with a bid-based drafting element. It’s pretty simple to teach and understand, so it is definitely suited to families and new gamers. The full game takes only about 20 minutes, which feels just right for what it is.

The production of this game is great, in particular the attractive gold-foil stamping on the wild card sections. This detail helps to differentiate them from non-wild sections, and it gives them an attractive, shiny pop. The rules are clear and thorough, the box is just the right size for its contents, and the player tokens are nicely oversized. All in all, it’s a good-looking product.

However, I found the gameplay only so-so. It has a great theme and the scores are typically quite close (a sign of strong design), but the play experience just didn’t grab me. In general, players can work with just about any card they get; very rarely will a card not match anything at all. As such, the bidding decisions just didn’t feel that meaningful to me. Sure, sometimes a column has multiple cards, which might make it slightly more attractive than the other choices, but there is hardly ever a sense of urgency or importance, no moments of “Oh man, I really need this exact card.” This is not to say that the game is devoid of decisions, but rather that the decisions it presents feel very shallow.

That said, I do like the twist of bidding in relation to other players on a low-to-high scale, as it means that any number can be useful in the right situation. In some games with this type of hand-based bidding, the higher cards are simply better than the lower ones, but in this game, you might want the column on the low end of the display, in which case a 1 would be your best bet!

All told, That Old Wallpaper is an okay game, but only okay. It puts an interesting spin on traditional numbered-card bidding, but does not offer enough strategic considerations to keep me engaged. I suspect that newer and/or more casual gamers might like its laid-back play style, but personally, I’ll stick to other AEG titles like Cascadia, Calico, and Point Salad.

That Old Wallpaper is a mixed bag. It approaches numbered-card bidding in an interesting way, but the decisions it presents feel shallow and the strategy is not meaningful enough to be engaging.