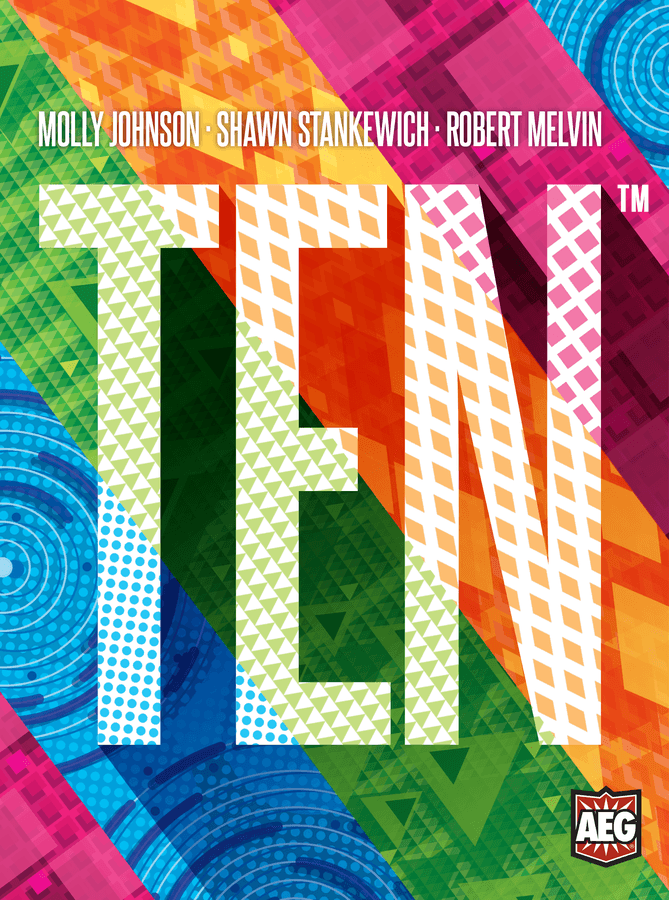 TEN is a new push-your-luck game from AEG. In this game, players aim to earn the most points by collecting runs of cards, but in order to gather the necessary cards, players need to take risks. How does this game stack up against other push-your-luck titles out there? Let’s find out!

There are lots of push-your-luck games on my shelves—among them Can’t Stop, Exxtra, Incan Gold, The Quacks of Quedlinburg, and Circus Flohcati. TEN is a new game in this genre, and it puts some interesting twists on tried-and-true push-your-luck mechanisms.

The goal of TEN is to earn the most points, and players do this by arranging consecutive sets of cards. The deck consists of 3 varieties: number cards, which come in 4 colors and values 1-9; wild cards, which can take the place of number cards; and currency cards, which provide money.

Each player begins the game with 5 money, represented by black stones. On a player’s turn, they flip over cards 1 at a time into a row, deciding after each flip whether to stop or keep going. As cards are revealed, a running tally is kept of both the total amount of currency in the tableau and the total net value of number and currency cards together.

If either total exceeds 10, the player busts and their turn ends. If this happens, all number cards are moved to a card market area and the player receives a white bust stone, worth 3 money. If they busted based on the net total, then all other players earn the amount of money shown on the currency cards.

Otherwise, if the player chooses to stop before busting, they may either take all the currency or all the number cards in the tableau. If they choose the number cards, they may also purchase a card from the market for its face value (e.g. a “5” card costs 5 money).

As the active player flips cards, any time they reveal a wild, their turn is interrupted, and a once-around auction occurs for the card. This means wild cards never remain in the tableau, but immediately go to the highest bidder.

When the deck is exhausted, the current player finishes their turn and each player may then resolve a final buy phase. At this time, the game ends and players determine their scores. For each of the 4 colors, players earn 1 point for each card in their longest continuous run. Should a player make a full run of 1-9, they earn a bonus point, meaning the run is worth 10 points rather than 9. The player with the most points wins!

TEN is an enjoyable push-your-luck game that fits alongside other greats in the genre. Of the many push-your-luck games I have played, TEN probably feels like most like Circus Flohcati, given its central mechanism of flipping cards into a row and trying to make sets. However, TEN expands upon this idea with multiple different types of cards and an in-game economy. It also engages players off-turn with occasional auctions and payouts. Money can be be very important, so players have to weigh their options when taking cards or pushing their luck; depending upon the outcome, their opponents might stand to benefit greatly.

With these things in mind, however, TEN does seem a bit fiddlier than many games in the push-your-luck category. It is not complex by any means, but it has a couple of rules that feel unintuitive. For example, players only get a buy phase if they take number cards—not currency cards—and opponents receive payouts if the active player takes number cards or busts based on net total, but not if they bust based on currency total. When teaching the game, little things like these can make the rules seem more confusing than they actually are. Thankfully, the included player aids provide a handy reference, but overall, this game feels less clean than other releases from the same design team.

The production of the game is very nice, with tactile plastic stones and spot-UV on the box and cards. As usual from AEG, the rulebook is thorough and well laid out. The game also includes a solo mode which pits the player against an AI opponent.

Compared to push-your-luck games like Can’t Stop and Incan Gold, TEN feels slightly more “gamer-y,” with a card market, an economy, and decisions that affect other players. It does not supplant any of the push-your-luck games in my collection, but it makes a nice addition alongside them.

Mechanically, TEN feels a little less clean than other games from the same design team, but it provides an overall enjoyable experience. It does not supplant any of the push-your-luck classics, but it fits alongside them.