Review – Tasha’s Cauldron of Everything

What Wonderful Witchery is This? 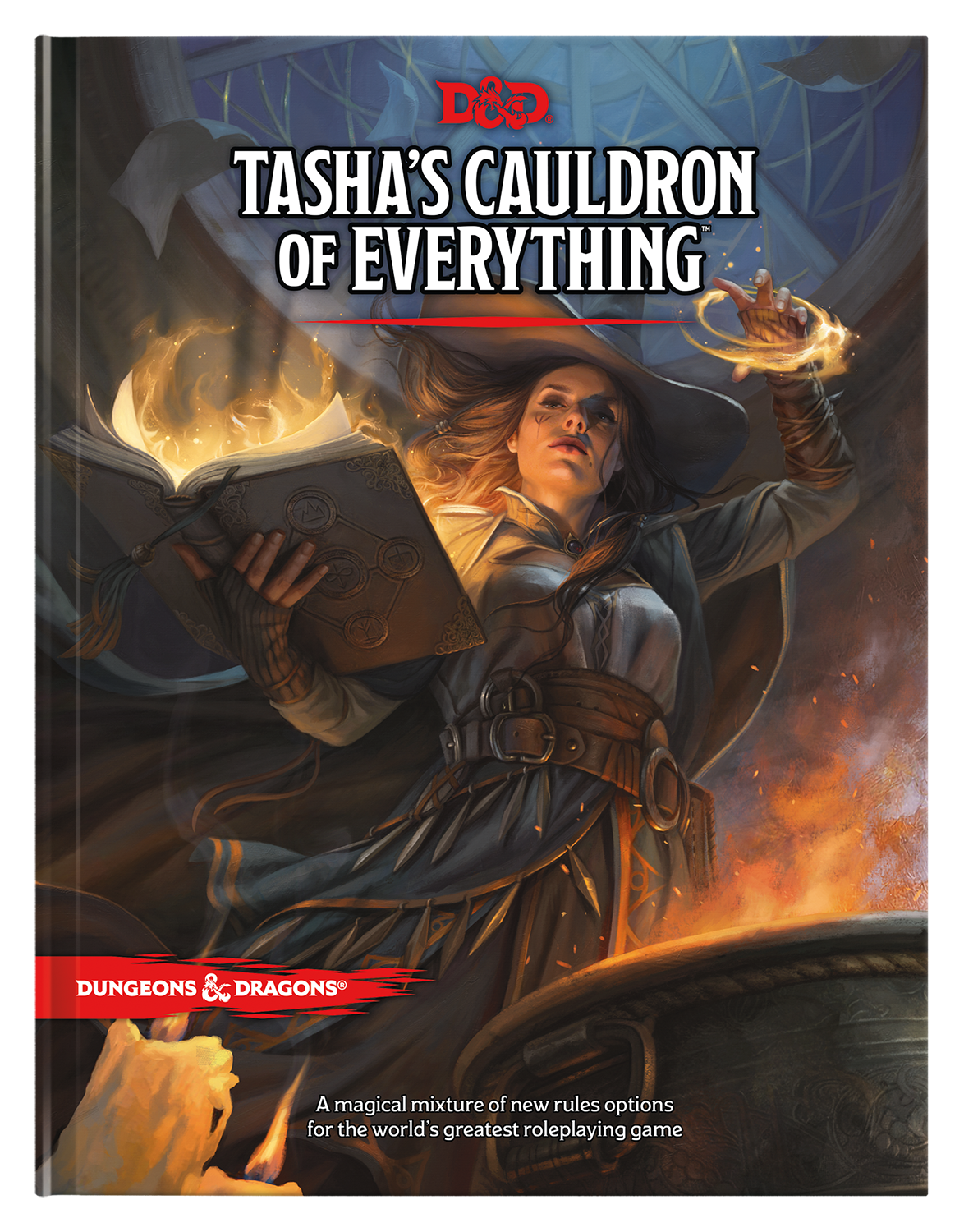 Dungeons & Dragons books tend to fit into three categories, from what I can see. Essential books like the Player’s Handbook, Dungeon Master’s Guide, and Monster Manual; location and adventure books that add new locales and questlines like Rime of the Frostmaiden or Mythic Odysseys of Theros; and supplement books like Xanathar’s Guide to Everything. Tasha’s Cauldron of Everything falls into the 3rd category, adding new subclass options, Patron rules, spells, items, and Dungeon Master tools such as sidekicks and puzzles. While it might seem superfluous, Tasha’s Cauldron has everything you’d need to make a D&D Iron Man or Jedi Knight. Or in the vernacular, an Artificer Armorer or Psi Warrior. Read on for the review!

D&D is an adventure fantasy setting, where players may encounter spells, spellcasting, witches, mythical enemies, and should the occasion call for it, violence. Most of the images in the book are tame. One two-headed monster has it’s teeth bared, mid-roar; on another page a Celestial being is being called down from the heavens. He is muscular, winged, nude, and covered by a well-placed banner.

The book is spiced up throughout with anecdotes and asides from Tasha herself; all of these flavor texts are joking in nature and full of a dry, sarcastic wit. Think if April Ludgate from Parks & Rec went to Hogwarts.

Tasha’s Cauldron is split up into four chapters, but the first one is the meatiest. It discusses the new features and subclasses available to players, as well as new feats for groups. Chapter two is all about patrons who can fund, help, or hinder players as they drive the story along. It also has rules for setting up your own group, should players wish to live out their very own Acquisitions Incorporated. Chapter three has new spells, items, and magical tattoos for both characters and monsters. Chapter four is more Dungeon Master focused, laying out rules for sidekicks and ending with some puzzles for those who like to test their mettle.

Honestly, if “Medieval Iron Man” didn’t pique your interest I guess you can probably skip this book, but for the rest of us who still have a bit of joy left, let me expound. The new subclass Artificer are masters of invention – think of the master engineers from World of Warcraft and you’re on the right track. An Artificer can cast spells as well as rely on their specialty, be it alchemy, magically-infused armor, an eldritch cannon, or a mechanical owl. There are also new subclasses for the main class options found in the player handbook, but the Fighter subclass of Psi Warrior (also known as Jedi Knight) was my favorite. Protective field, Psionic Strike, Telekinetic Movement, and Psionic Energy – and those are just at level three! As soon as I finished this chapter I wanted to roll up a Jedi and an Avenger.

Chapter two is about group patrons, which is a great way to bring a motley crew of otherwise unaffiliated adventurers under one roof. Patrons can give parties assistance, perks, assignments, and duties, all while helping players move towards a common goal beyond the cliched, “Defeat the big bad evil that has returned to the land.” Patrons can hail from all walks of life, including academia, gods, military, aristocracy, and even criminal syndicates. Yes, now your group of murder hobos – I mean bloodthirsty adventurers – can have a criminal enterprise of their own ranging from a standard thieves’ guild to magic arms dealers to body snatchers. (I didn’t make any of those up, those are on a table you can roll on on page 91!) Also, should players choose they could become their own patron, and be the boss themselves. While this has its perks, players are also asked to consider the cost of being the man in charge, from considering stocking the armory to getting a majordomo or apprentice to run things while they’re off saving the world.

I audibly laughed at this sidebar.

Chapter three contains spells, monsters, items, and tattoos, all of the magical nature. From the book, “Magic tattoos are initially bound to magic needles, which transfer their magic to a creature.” I won’t spoil most of the ideas in the book, but just about any spell you could imagine can be inked onto a character or monster for the right price. Want to deal more damage? Use your finger like a magic pen? Save yourself from a killing blow? Get a tattoo! If all else fails, a magical tattoo parlor sounds like a much cooler location than going to yet another tavern in D&D.

Chapter four has a lot of good information for both new and experienced Dungeon Masters, ranging from session zero and party formation, including a table for rolling their origin story, all the way up to sidekicks and puzzles. Sidekicks are great for when you only have one or two players, someone wants to “try out” the game with a simple character, when the Dungeon Master wants to also play a bit, or when the party runs into a unique NPC who they don’t want to say goodbye to. In the last example the party can either choose a player to play the sidekick as well or the party can jointly control them. Sidekicks have three choices of class: Expert, Spellcaster, or Warrior, which they keep for their entire career. They get level-specific features and bonuses just like a player’s character, but much more streamlined.

Mimic…colony? Seriously though, everything in the picture is a mimic. The teacup, the pot, I think one of the ladies might even be a mimic.

So who would Tasha’s Cauldron of Everything appeal to? It’s not an absolute must-have, and even before getting it players should check with their Dungeon Master to make sure they don’t mind running a game with a new subclass. But some of those subclasses sound like they would be a blast to play, and if you have the means and anything I described sounds cool to you, check it out. I also really enjoyed the little editorial notes from the hilariously sarcastic Tasha herself, who doesn’t seem to take anything so serious that it can’t be poked fun at. While not essential, Tasha’s Cauldron would be a great addition to any growing shelf of Dungeons & Dragons books.

Tasha’s Cauldron follows suit with other D&D books of having an alternate (L) and standard (R) cover; players can get them or other D&D products at their FLGS or on dnd.wizards.com.

Review copy was provided by the publisher.

If you ever wished you could add medieval Tony Stark or play as a Jedi in your D&D games, this book is for you.