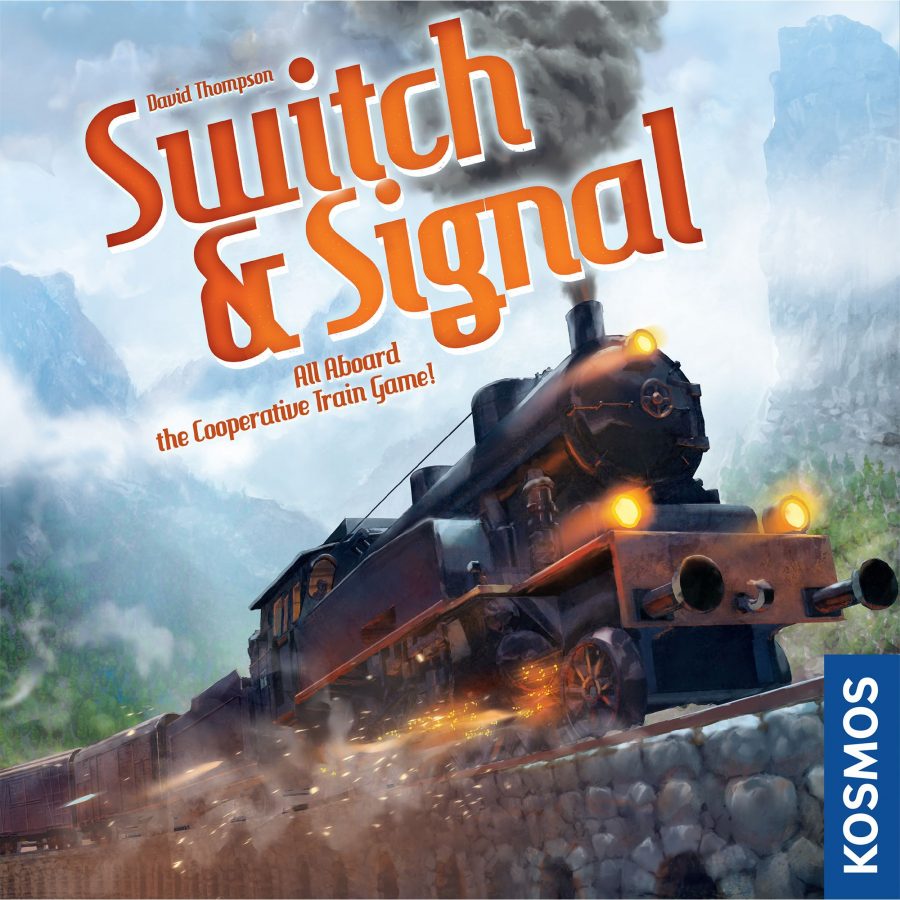 Switch & Signal is a cooperative game in which players manage an interconnected railway system. It is light on rules but presents a challenging puzzle. Grab your conductor’s hat and let’s check it out!

In Switch & Signal, players work together to pick up and deliver goods, by train, around a board. Up to 9 trains can be on the board at any time, and players must carefully coordinate their movements to deliver the goods without wasting time or causing collisions.

The board consists of a series of rail lines connecting various cities. 4 of these cities are goods depots, and 1 or 2 cities are the destinations to which players must bring goods in order to win.

On a player’s turn, they begin by flipping a departure card. This card will add trains to the board and/or cause trains to move. The starting location of a train is determined by a roll of 2 dice; the space showing the sum is where the train begins (e.g. space #6 on a roll of 5 and 1). A train is moved by the roll of a different die, matching its color. The movement dice are not identical—on average, the black trains are faster than the brown trains, which are faster than the gray trains.

Once the departure card has been resolved, the player may spend as many action cards from their hand as they wish. There are 3 types of actions: switch setting, signal setting, and train movement.

The small cities on the board have junctions with either 3 or 4 switch spaces. At all times, every junction has exactly 1 throughline, comprised of 2 open spaces; the other 1 or 2 spaces are blocked by black discs. By playing a switch setting card, a player may rearrange these discs, thereby changing the junction’s route.

The board also shows numerous red light spaces. A train cannot move through a red light, so players frequently need to change signals to green using signal setting cards. The catch is that there are only 8 green light tokens on the entire board (9 in the advanced game). When a signal is changed to green, the token must come from another space, thereby turning that space red again!

By playing a train movement card, the player may select any engine on the map to move. As trains travel, players must try to prevent them from running into red lights or other trains. It’s important to keep trains moving, both to prevent a log jam and to avoid penalties. If a train remains on a start space for too long or wastes movement points, players lose time tokens, which advances the game clock.

As players move through goods depots, they can pick up cubes, to be delivered to the destination city/cities. This is the ultimate goal of the game. If players can deliver all the required goods before the final departure card is resolved, they win!

Switch & Signal is a tough but enjoyable co-op challenge. It presents players with an increasingly complex puzzle and not much time to solve it. The team has to groupthink the order of operations each round. The dialogue at the table usually goes something like this:

“Okay, we need to move this train, because it’s blocking the way for these other two trains. If either of them has to move, it will cause a collision. So we need to turn this light green, but where should we take the green token from? We could take it from this space over here, but then we’ll have to change the switch nearby so that train can avoid the red light. And if we reroute that train, then it will be moving away from the goods depot!”

And so on and so on. This game forces players to balance turn-by-turn operations—the decisions necessary just to get by—with the long-term goal of delivering goods. It’s thinky and challenging.

The production of Switch & Signal is nice, if minimalistic. The board and cards are easy to read, the trains are fun to move about the map, and the wooden dice roll nicely. The rulebook is laid out well and contains examples that help players to understand the game. Switch & Signal is certainly not flashy, but it doesn’t need to be. It’s clean and it works.

I find this game oddly fascinating. It has little strategic nuances like the fact that certain start spaces are more likely to be rolled than others. As such, when players are deciding which trains to move from their start spaces, they have to weigh the board-state with the dice probabilities. Also, the fact that only a fixed number of lights can be green at any time means players constantly have to make tough decisions about which routes to open up… and therefore which routes to close down. It all coalesces into a cool, crunchy puzzle.

If you are a fan of challenging co-op games, I recommend Switch & Signal. I really dig it.

This game presents a tough but fascinating puzzle. If you are a fan of challenging co-op games, I recommend Switch & Signal.