I have a sinking feeling... 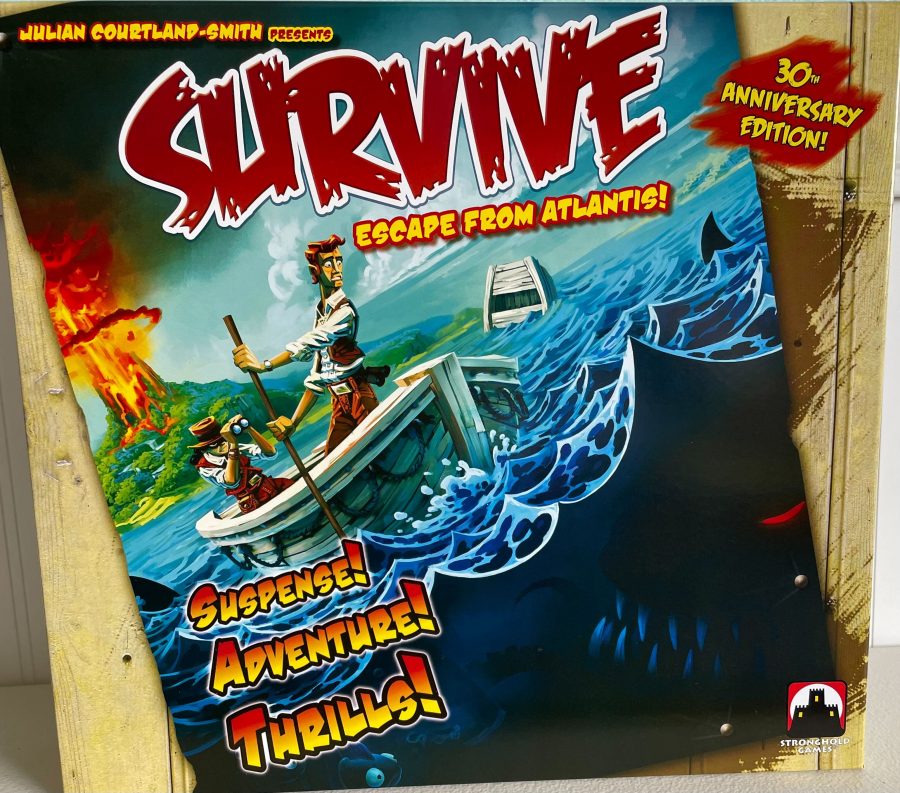 Survive: Escape from Atlantis! is a two to four player game where everyone is trying to escape from the recently found island of Atlantis, which has begun to sink just before play begins. Players have been attempting to escape the island for 30 years since the original printing of the game, and Stronghold Games decided to print a new issue for the anniversary of the game. So is it a big splash, or a short swim in whale-, shark-, and sea-serpent-infested waters? Read on for the review!

Players take turns placing the tiles that make up the island of Atlantis, as well as their explorer meeples and boats. After setup, play consists of playing a terrain tile, moving explorers or ships three spaces total, removing a terrain tile, and rolling the die to move a creature. Some tiles have a green border (these are played immediately), and others have a red borders (these can be played later on). Play continues until all explorers are removed from the board or until the volcano tile is revealed.

Between the random setup of the board and the dice roll each turn, a lot of random things can happen in Survive. There is some strategy involved, but often, players simply need to roll with the punches. They will lose ships and explorers and their plans will go out the window quickly, but personally, as long as I’m not getting ganged up on I still have a lot of fun. Not knowing if a tile is a free boat or a sea serpent popping out of the water adds a layer of decision-making to each move. Yes, a player could take the ground right out from under their opponent, but if that tile reveals a boat, that will likely help them. And they could take a tile right next to their own explorer, but if it turns out to be a whirlpool then they have sealed their fate. There’s a lot of room for payback and “take-that” moments, so make sure to play with seasoned gamers, or at least ones that don’t mind that kind of game.

This 30th anniversary version makes Survive readily available to new players. The sea creatures and boats are all nice wood, and the explorers and die are hearty plastic. I did find that the hexagon tiles that make up the island tend to shed a lot at first use, but it was nice that they were already punched and sorted.

In the end, this printing of Survive is still a lot of fun and an easy recommendation to anyone who hasn’t played it, as long as they don’t mind a bit of randomness and a lot of take-that opportunities in their games.

If you don't already have it, Survive is a lot of fun; if you have a recent printing, there isn't anything new here.