Review – Strixhaven: A Curriculum of Chaos

Welcome to the D&D version of Hogwarts 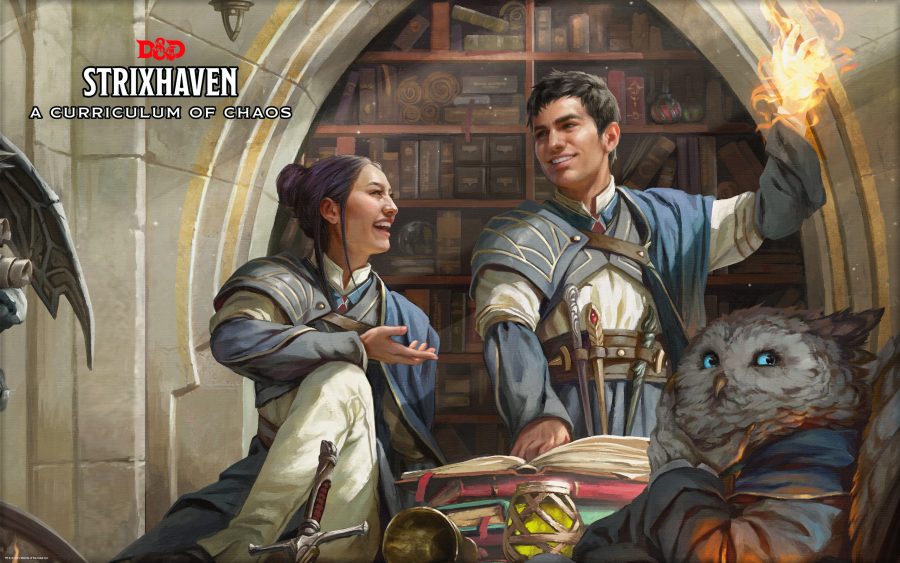 In Strixhaven: A Curriculum of Chaos, D&D players can visit a magical college for spellcasters and magically-inclined characters while also rooting out an evil spellcaster lurking in the background over the course of their 4-year visit. Or, each of the 4 adventures that make up a year at the university can be broken up into single adventures if that is more your speed. So does this book make the grade, or just end up being another failed student? Read on for the review!

This book is about a magical college founded by dragons, where spellcasters are invited to hone their craft. As such, there is a lot of magic, spells, magical items, and creatures infused with, touched by, or changed by magic. There are also several unfriendly creatures, many drawn with teeth or weapons showing, mid-attack. However many of these encounters can be resolved non-violently if the players try alternate means of de-escalating the situation.

Just to be clear, it’s not just a joke – Strixhaven is D&D’s own version of Hogwarts. But instead of 7 years, it’s much more of a 4-year university experience. After the introduction section, the book is broken up into 7 chapters. The first chapter touches briefly on staff, students and studies, then launches into the campus itself and describes in greater detail the 5 different schools of magical study available at Strixhaven. Chapter 2 has new character creation options, including the new Owlin Race, backgrounds, feats, spells, and magic items. Chapters 3-6 each detail a year in the life of a Strixhaven student, taking players from level 1-10 over the course of multiple sessions. Or, if desired, each year can be played as an individual adventure, divorced from the overarching narrative but still just as fun for a quick session. Finally, the last chapter has stat blocks and illustrations detailing some of the Friends and Foes (the chapter title) players can hope or expect to run into at the college.

Players are given the option to commit to 1 of the 5 colleges of study after their first year at Strixhaven. Lorehold (also known as the College of Archaeomancy) “explores the past and preserves its lessons for future generations.” By that description, I wanted to roll up an unusually lucky bard who wears a fedora and thinks anything found belongs in a museum. Prismari (College of Elemental Arts), “uses the elements to practice the arts.” Some might be afraid to try it out, but the cold never bothered me, anyways. Quandrix is also called the College of Numeromancy; the mathematics of nature. While initially my response was meh, one of the suggestions for scholarly study caught my eye: Metamancer, “studying metaphysics to alter reality.” In other words, study this if you’d like to roll a Dr. Stephen Strange-type character? Silverquill is also called the College of Eloquence, which sounds way cooler than having a bachelor’s degree in the Liberal Arts. Silverquill is for writers, poets, speakers, and bards, and would be my first choice. Witherbloom (also known as the College of Essence Studies), “harnesses the forces of life and death.” (Slytherin. They’re totally Slytherin.)

Each of the adventure chapters gives players plenty of different social, roleplaying, and combat encounters in addition to what you might expect to run into in a roleplaying session as a collegiate spellcaster. Players also have the option to deal with relationships, studying, tests, extracurriculars, jobs, and rivals. While many of these rules are optional, I think they would enhance the game for everyone. If you aren’t juggling an all-nighter, a new friendship, and a rival gossiping about you, then the players might as well be outside investigators instead of students. Each chapter offers a lot of options to pull in information or NPCs that the players know to help draw them in further, which is commendable. Narrative tools to enhance the immersion and buy-in from players are always appreciated.

Without revealing too much, some of my favorite bits from the entire narrative include: the Battle of Strixhaven, Captain Dapplewing’s Manor, the Scavenger Hunt, and the Masquerade Ball. But each of the different chapters has some great adventures, roleplaying, and opportunities for players of any type to enjoy themselves with the help of their DM. Strixhaven is an engaging book and one that I hope to find myself using at the table with a group of friends in the near future.

Strixhaven is an engaging book and one that I hope to find myself using at the table with a group of friends in the near future.