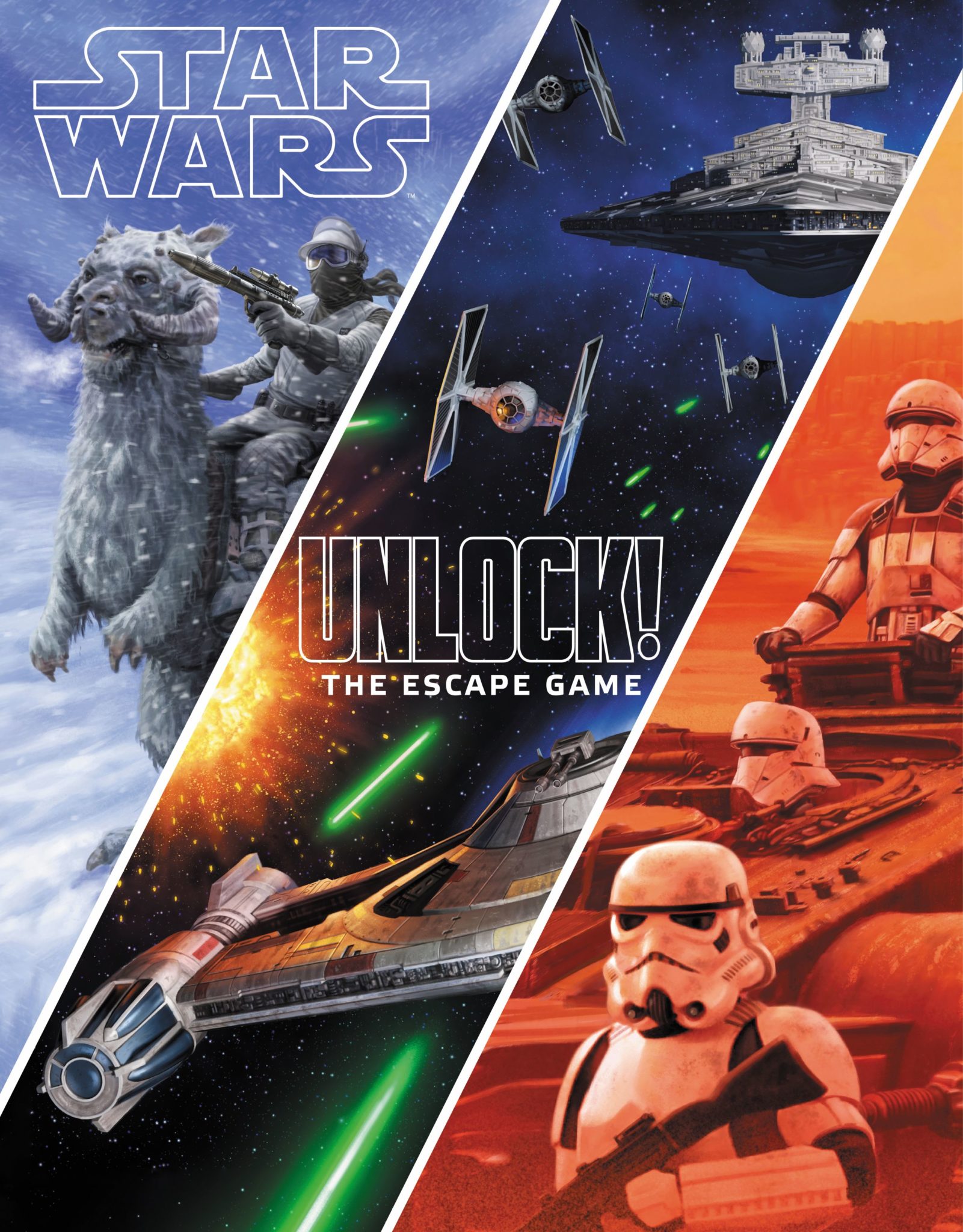 With a worldwide pandemic making escape rooms a thing of the past, board game are here to help. For the past few years, cooperative “escape room games” have grown in popularity, spearheaded by the EXIT and Unlock! series. They have major philosophical differences; for example, Unlock! heavily relies on a free phone app. Furthermore, Unlock! falls under the Asmodee umbrella, who currently has the Star Wars license. And here we are!

While this seems the ideal game for the intersection of Star Wars fans and Unlock! fans, it immediately begs the question: what if I even like only one of those? Space Cowboys has done its best to spread the net as wide as possible here.

It seems that the designers anticipated Star Wars fans who are casual gamers might express interest, and for that reason, the difficulty here is a bit lower than other in Unlock! games. In particular, there is a fantastic new concept called Advantage Cards; players get three cards (randomly chosen out of six) with various hints or benefits. Of course, “hardcore” players can choose to play without these. Personally, I enjoyed them and thought they also added character and flair to the experience.

Speaking of that “flair,” players are required to install a separate app from the standard Unlock! app for some reason, but it works the same as before. Of course, it has official Star Wars music playing, another way to add to the thematic ties of the experience. However, if you are merely an Unlock! enthusiast, fear not: while I think you’ll enjoy the game quite more if you understand the Star Wars references, they are not required to solve the puzzles. Additionally, another new inclusion is an actual physical booklet full of solutions. I never peeked in it, but it is another welcome inclusion that players can choose to use or not.

While advantage cards, solution manuals, and a lower overall difficulty are there to make the game more accessible to beginners, it’s not perfect. You can see by the app’s much lower rating on the Google Play store compared to the original Unlock!: several players rated it poorly because “Card XY is broken,” when it’s not: instead, Card XY requires you to do something pretty silly with your phone. Unlock! has really pushed what it is able to do with phone integration, and I want to say this is a good thing, but I actually don’t like it. Quite often, if I can’t figure a puzzle out, it’s because the “meta-puzzle” involves some sort of strange way of using the phone that seems to break the “implied rules” of what you’re allowed to do in the series. While I don’t like it personally, I can’t really mark it as an objective negative point; some people may greatly appreciate the risks taken here.  And again, Unlock! veterans won’t be too surprised.

Overall, with the amount of railguards in place and the familiar license, this is probably the most widely accessible Unlock! game yet. And with more and more people needing stay-at-home alternatives these days, it’s the right game at the right time.

Thank you to Asmodee North America for providing a review copy of Star Wars: Unlock!

This is a nice introduction to the Unlock! system for Star Wars fans, but it may be too easy for hardcore veterans of the series.