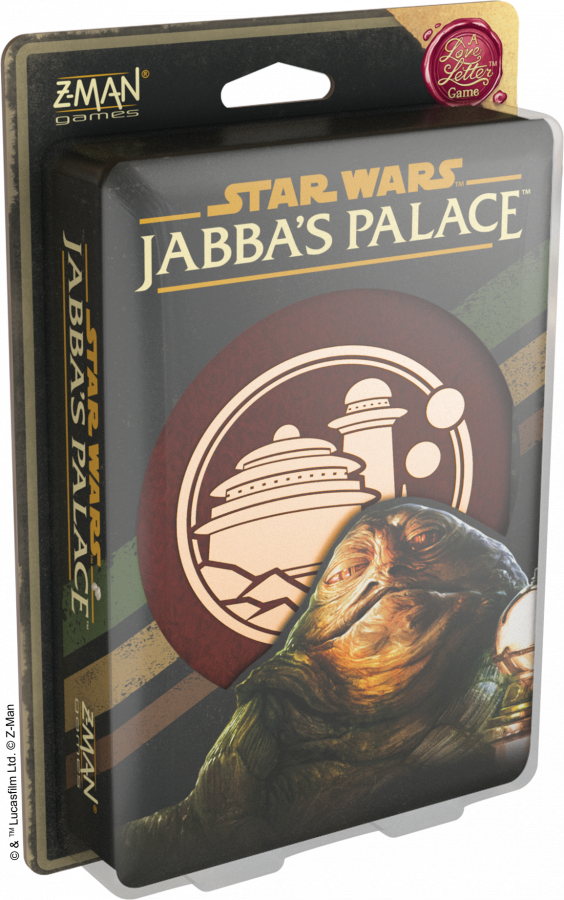 Jabba’s Palace is a Star Wars themed game modeled after the game Love Letter. And while you won’t be trying to woo the famous Hutt gangster, players will play cards and vie for position, trying to knock other players out of the round or just be the most powerful last one standing. So, do you have what it takes to fight for position in the den of Jabba at the height of his power, or will you end up in the bottom of the Rancor pit? Read on for the review!

Just like books and movies, when a game is a hit, often there are multiple copycats or iterations soon after. Love Letter is popular enough to have spin offs including such intellectual properties as Marvel, Cthulhu, Batman, and now Star Wars. Players familiar with Love Letter will instantly pick up on the gameplay: players each have one card in hand to start, and on their turn will draw a new card and play one of their two cards. Cards have various effects such as seeing someone’s hand, trading cards, guessing cards, and eliminating players. Rounds move quickly at times, and the whole game could easily be concluded in 15 to 20 minutes.

What’s new in this iteration is the addition of Agenda Cards. These four cards give an alternate means to winning besides being the last player standing. “Exalted One” (the suggested starter agenda) has the highest number in hand winning the round out of the players still in when the deck is empty, which makes players want to keep the most powerful cards in-hand rather than using them. “Rescue Mission” is maybe the hardest Agenda since there are fewer rebel cards, and has it so that the player with the most Rebel cards in their play area (not hand) wins the round. “Jabba’s Court” is the opposite, with the highest sum of Palace cards in the play area winning the round. And finally, “My Kind of Scum” has the highest number of Palace and Rebel cards in hand both win the round. Agendas don’t change between rounds but can be switched out each game.

The cards themselves are all well-done drawings that look like they were taken from frames of Return of the Jedi, and the backs of the cards are nice references; the character backs are the eyeball of the gatekeeper droid, and the back of the reference cards looks like a view from the pit of the Sarlacc, looking up at Luke Skywalker’s attempted devouring. The reference cards also remind players of both the powers and quantity of the cards in the deck – there’s only one of most of them, but two of Boba Fett, Bib Fortuna, Mercenary, Salacious Crumb, and Guard. The tokens are a nice thick plastic chit with rounded sides, which is a nice change from the expected cardboard chit. And everything fits nicely in the dice bag sized pouch that says “Star Wars” on the side with a picture of Jabba’s Palace.

All in all, Jabba’s Palace is a great adaptation of Love Letter that manages to add something good with the Agenda cards (although I do wish there were more than just four). Players will realize quickly that it pays to go on the offensive early and often, since you never know when someone will knock you out of a round. If you haven’t played Love Letter and would like a Star Wars flavored fast-paced card game, then look no further.

A quick-moving Star Wars themed adaptation of a popular card game; if that notion appeals to you, check out Jabba's Palace.