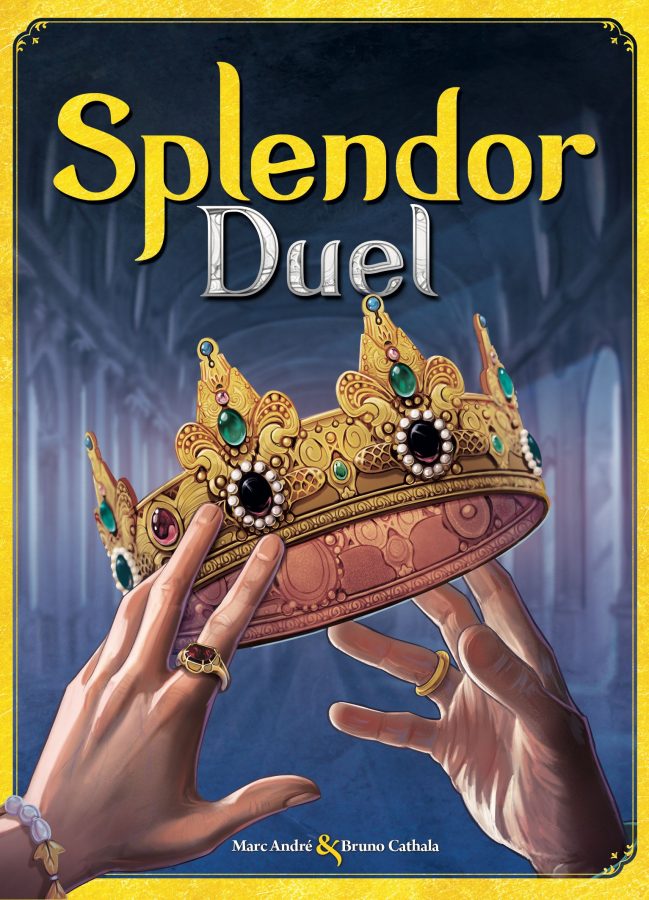 Shortly after I joined the hobby around 2010, 7 Wonders released, and I vividly remember getting it at the local board game store and playing those first few games of it at our old apartment. It quickly became a staple at our household. By 2014, I had already begun reviewing board games, and I likewise remember playing five games in a row of Splendor with my wife, pregnant at the time with our first child. Not much later, Bruno Cathala teamed up with 7 Wonders designer Antoine Bauza to create 7 Wonders Duel, a game that manages to eclipse its big brother, and a game I’ve played literally hundreds of times. Given all of this background, I was quite excited when I discovered Bruno had joined designer Marc André to create Splendor Duel. Does it live up to my very high expectations? Let’s look! Your first question might be: doesn’t Splendor already work fine at two players? Yes, it does. However, its variable player count keeps it from using any “special” rules for two players, such as the alternate win conditions and direct attacks found in 7 Wonders Duel. In Splendor Duel, the foundation of Splendor remains, but the game’s complexity has been ramped up considerably. While it probably fits the “Kennerspiel des Jahres” category, it’s not as complex as 7 Wonders Duel and is right at the bottom edge of “gamer’s game.”

There are quite a few differences, but let me just highlight some big ones. Gems are now taken three (or less) at a time from a central grid, with gold tokens acting as “barriers” since they cannot be taken this way. Sniping 3 gems of the same color, or 2 of the new, rarer pearls, comes with a price. Your opponent gets a “privilege” and can take a gem from anywhere on the board as a bonus action. Over time, the board empties; while you can optionally refill the board at the start of your turn, it likewise provides your opponent with a privilege. The game has a new ebb-and-flow over the board state, shifting from a race for the “good” groupings to a game of chicken over refilling the board, and then back to the race. It is immediately far more interactive than its predecessor.

The other big change is that there are now three ways to win. Players win by earning 20 victory points, 10 points within a single color’s column, or by getting 10 “crowns.” Crowns are bonuses on cards (similar to Marvel Splendor‘s tags), and they are now the way to earn the favor of Nobles, which provide victory cards and/or bonus actions. Likewise, many cards now provide bonus actions like taking an extra turn or gaining an extra gem. Most (perhaps all) of these require the precious new pearl resource, but gold tokens (gained only by reserving a card) can be used as pearls, preventing the game state from clogging when pearls are scarce, and likewise increasing the value of reserving cards.

All of this is an incredible amount of “crunch” for the successor to a simple family game, and it all happens in 30 minutes at the most. I explained the game to my primary 7 Wonders Duel sparring partner, we chit chatted, and then we played three games of it all within 90 minutes. I thought that the refilling and emptying the bag of tokens would be much more time-consuming than it was. The chips have the same “clink” as the larger Splendor gems, but are just the right size to rapidly roll a stack off your palm onto the board with your thumb.

Speaking of the components, they’re fantastic. I have to restate that the chips are great, which is a key part of the game’s aesthetic appeal. The art is also a huge improvement over the original game, which had too many pictures of empty caves. The cartoony art in this one is quite enjoyable; every single art piece drew my attention. I’m known for ignoring art in games, so this is impressive.

Furthermore, the box is extremely compact, and would easily fit inside the original base game box, along with the base game, and its expansion, Cities of Splendor. In fact, here’s a photo to prove it; see below. (This sure seems like a strong case for “Splendor Travel Edition” – I’ll gladly buy that, Asmodee; are you listening?) My only complaint for the components is that the relatively nice insert immediately went to the trash because it just barely didn’t hold sleeved cards, even though I was using Asmodee’s own Gamegenic Mini Euro sleeves. While the $29.99 price tag might seem high for such a small box, I want smaller boxes, and the quality is there. 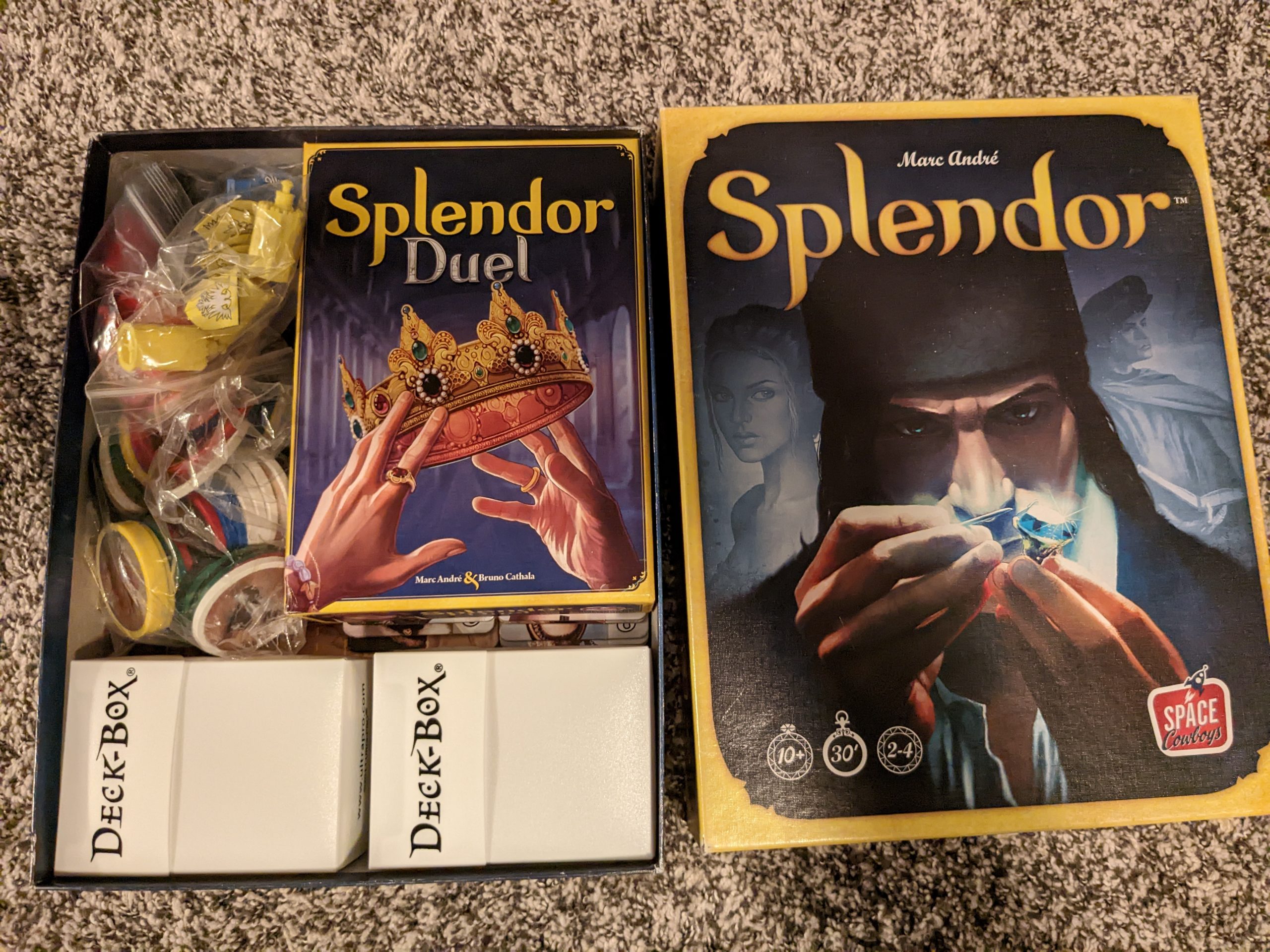 So it’s fast; it’s complex-but-not-that-complex; it has great art and components. Is it fun? YES! I still love Splendor almost a decade later, and this retains everything that makes Splendor fun while improving upon it in every way. Some players may not like the heavier interaction (there are also a few “attack” cards that steal gems), but I do not mind at all. Just as 7 Wonders Duel managed to make 7 Wonders even better, Splendor Duel is a real… … … gem. Sorry, couldn’t help myself.

I cannot find a single flaw with this game. The only thing I and my playing partners could think of is that 7 Wonders Duel is a bit meatier and might feel worthier of a full game night, while this comes across as a filler. But how could I call that a criticism of the game? I’m quite happy to have an amazing filler game to begin or end a night on. In fact, playing this both before and after a few games of 7 Wonders Duel sounds like a perfect game night to me.

A beautiful game with a flawless design.