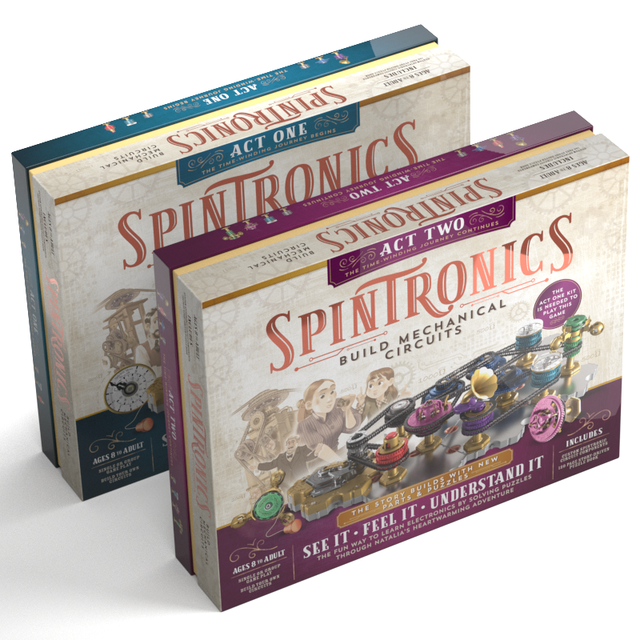 Spintronics is the sophomore release from Upper Story, publisher of the excellent Turing Tumble. Whereas that game taught principles of computer science, Spintronics teaches principles of engineering, such as circuits, resistance, voltage, and switches. Ready to get those mental (and physical) gears turning?

Sometimes people’s opinions change. As gamers, sometimes we fall in love with a new game when we first play it, but over time, our view of it declines. (And sometimes the opposite happens!)

My opinion of Turing Tumble has never changed. When I reviewed it several years ago, I gave it a perfect 10/10 score, and I wholeheartedly stand by that today. Turing Tumble is, in my opinion, the coolest toy ever made.

Spintronics, then, had a lot to live up to. A new, kinetic puzzle toy, this time focused on principles of engineering? Could it possibly give me a play experience worthy of its predecessor? It was hard to keep my anticipation—my own self-imposed hype—in check, but I did my best.

Like Turing Tumble, Spintronics is chock-full of goodies. The basis of all Spintronics builds is a battery, which runs on a pull-string. As the battery spins, it turns a gear unit, and using lengths of plastic chain, other mechanisms can be connected to it, including resistors, switches, ammeters, junctions, and capacitors.

To place these gadgets, the player connects one or more hex tiles to the battery tile. Each component has a magnetic base, which makes it stick to the metal plate of the hex it’s on.

The various components and their associated concepts are introduced gradually via a full-color comic book. Each time a new gadget comes into play, the player will be faced with multiple puzzles that use it, along with clear, concise explanations that help them understand what the component is, how it works, and how it’s used in real engineering.

Naturally, the challenges get harder as more pieces are added, but with this increased difficulty comes moments of clarity, where the player feels like they have made a breakthrough. As with Turing Tumble, it’s incredibly satisfying to see a Spintronics machine working. I’ll often run a machine multiple times, not because it will do anything different from one execution to the next, but because it’s simply fun to watch.

Something I haven’t mentioned yet is that Spintronics is broken up into two main sets: Act One and Act Two. The first act is, of course, the base game, with all the core components. Act Two is a large expansion that requires Act One to play. It includes a second book of puzzles, as well as advanced gadgets like an inductor and a transistor. The two kits integrate seamlessly together, and thanks to well-designed box inserts, it’s easy to separate all the pieces when putting the game away.

If you are considering purchasing this game, I would highly suggest getting both sets together. The publisher’s bundle deal is a slightly better value, and trust me, you’ll want both of them.

Spintronics does for electrical engineering what Turing Tumble did for computer science: it takes concepts that may seem arcane, abstracts away the complexity, and gamifies them into something fun and addicting. It lets players not only see, but feel how machines work.

Having played it with my 3-year-old next to me, I can confirm that it’s every bit as fun for a kid as it is for an adult. Sure, my daughter might not understand how all the pieces work, but she had a great time pulling the string and watching them come to life. As she gets older, I will be using Spintronics and Turing Tumble to introduce her to foundational STEM concepts.

The production of Spintronics is great; no surprise given the precision required to make something like this work. Sometimes the battery skips a little bit, but I have not seen this impact the machine’s execution. (And frankly, the same thing could be said for Turing Tumble—sometimes that game glitches a little as well, but it never causes a major problem.)

The only nitpick I have with Spintronics involves the placement and connection of components. Unlike Turing Tumble, in which the player can easily pop pieces into and out of the board, the components in Spintronics take a little more finagling to get situated. Obviously, it’s important to get the chain tension just right—something the book discusses early on—and configuring everything properly can take some trial and error. It’s a minor issue, to be sure, but something to be aware of.

Bottom line, lightning can strike twice. Amazingly, Spintronics lived up to my overly-steep expectations. It is another remarkable offering from Upper Story, a product that once again manages to distill an entire STEM discipline into an engaging, educational, and fun experience. If I had to recommend one of the Upper Story games over the other, I would give a slight edge to Turing Tumble, but that’s simply because I’m a programmer. Spintronics is a top-notch product, and I highly recommend it.

Review copies of Spintronics Act One and Act Two were provided by Upper Story.

Just as Turing Tumble gamified computer science into something approachable and engaging, so Spintronics gamifies electrical engineering. It's another amazing offering from Upper Story. Highly recommended.