Review – SPECTRE: The Board Game

Find out who #2 works for with worker placement and bidding 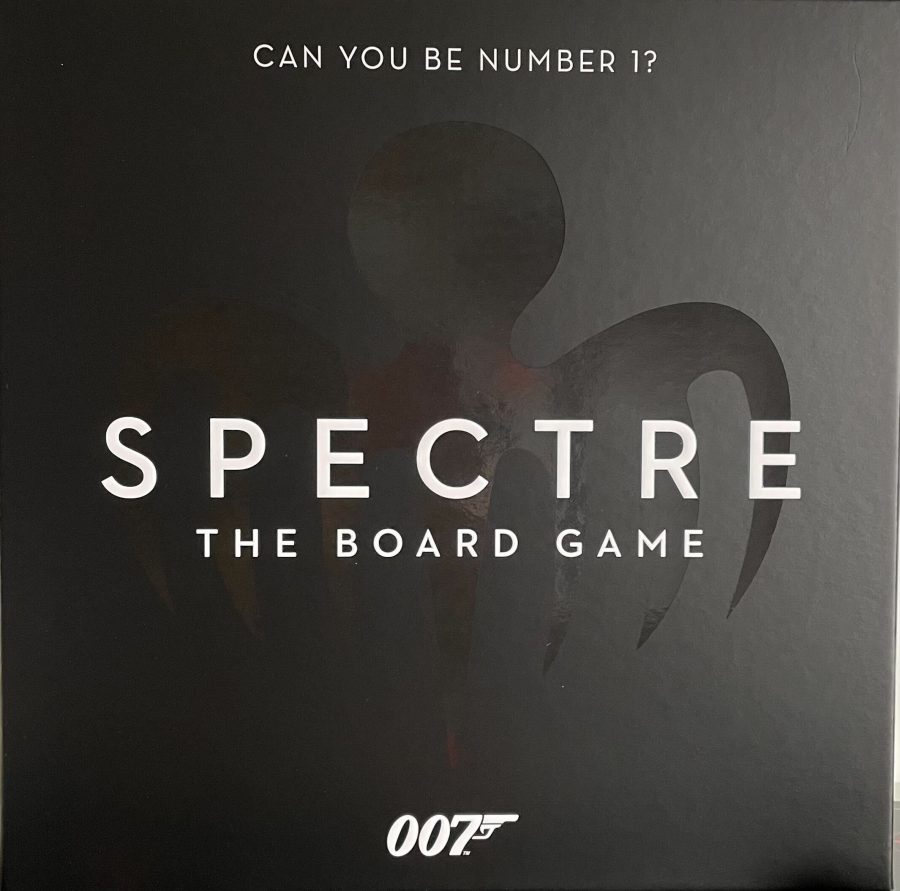 In SPECTRE: The Board Game, 2-4 players will vie for the position of #1 in the agency, each trying to advance their nefarious schemes and doing everything they can to keep from being tripped up by James Bond and each other. Players will place Villains, Henchmen, and Agents and bid to complete missions all while trying to stay 2 steps ahead of each other. So is it a Diamonds are Forever victory lap, or is it as lame of an adaptation as On Her Majesty’s Secret Service? Read on for the review, agent!

Speaking of OHMSS, SPECTRE: The Board Game conveniently forgets most of the Bond characters after Sean Connery and before Daniel Craig’s most recent interpretation; most of the mission cards are from Connery’s stint in the role, and the ones that do feature Craig don’t show his face. One of the playable Villains is from when Roger Moore played Bond in For Your Eyes Only, and one of the locales on the map is Arkangel Facility from Pierce Brosnan’s Goldeneye. No love for Timothy Dalton, sadly, or George Lazenby, appropriately.

Having now shown how much I am in fact the target audience, I’ll start talking about the game itself: SPECTRE is a worker-placement bidding game where everyone plays as Villains from the classic and most recent films. Players get resources by playing Villains or Henchmen in certain areas of the board, then after everyone has placed their pawns the player(s) who have majorities in any area also get a bonus on top of that. Initially I was pretty confused by the game board – for no reason that I can see, halfway across the board the placement and majority bonuses swap places on the board, which is pretty obvious when the board is clear but less so once there’s 4 sets of pawns, a dozen agents, and a few majority tokens lying on top of them. Also the rules page explaining the different bonuses are a few pages apart (page 10 and 13) which led to a lot of flipping back and forth. Players may also play their pawns on their Villain board if they want to unlock new abilities or get special bonuses.

I was left scratching my head more than once trying to decipher the rulebook. The game board itself does a good job of summarizing the round steps in the bottom left corner, but that’s only helpful if everyone is facing the board head on. They really needed a summary rules page or player aid cards.

A round works like this: Number 1 draws a mission card, then, if there’s 4 players, Numbers 2-4 take their respective advantages. Starting with Number 1, everyone places their Villain Pawns, then Henchmen Pawns, check for zone majorities, bid on and resolve the Mission card, roll to see where 007 goes, and then finally recover pawns and change numbers based on where everyone ended up on the SPECTRE track at the top of the board.

Players will gain resources based on where they place their pawns and can then use resources to unlock new abilities or to bid on Missions. Should a mission fail, there’s a penalty at the bottom of the Mission card, and also if someone is playing as Raoul Silva they get to move forward 2 on the SPECTRE track. Bidding on and winning Missions feels overly complicated, as you have to add up any committed resources, plus any agents in the active mission zone and if anyone placed their Villain pawn on the card if it’s one that requires it. Once you’ve added all those together, and if it meets the player-specific mission threshold (6/8/10 points for 2/3/4 players) then it succeeds, and anyone who participated in the bidding gets a new Secret Plan card, but only the player with the most mission points gets to complete a card. Add on top of all this that all 5 Villains have different powers and abilities, and it starts to feel a bit overwhelming. I went into this thinking it would play out like 007: Villainous but it’s more complicated than that.

One of the things I really liked was the way that 007’s presence is felt on the board, even in a game where you don’t get to play as him. Number 1 rolls the 2d6’s that have 1-4 and the famous gun scope from the movie openings on two sides each, and then adds together after a possible reroll of one die. Two of the scopes removes 1 of everyone’s agent from each region, a scope and a number means that player gets to send Bond to another Villain (I didn’t understand why it didn’t just mean THAT Villain gets visited), and 2 numbers means that region is visited by Bond, removing all agents and preventing any pawns from being placed while he’s there. This is why the regions are numbered 2-8 (though it wasn’t explained in the rulebook). The game ends after the final Mission card is revealed, and that round is completed. Emilio Largo may also end the game by completing his “Drop the Bomb” scheme as well. Then the player furthest along the SPECTRE track is the winner.

There’s a lot to like with SPECTRE, from the theming to the quality plastic components, but it feels like for every good step forward there’s two steps back into a hidden shoe knife. The plastic pieces and casino coin representing Bond are quality, but the Villain boards and cards are warped; you can go all over the board and gain resources in different ways but the bidding is overly complicated; it has missions from some of the oldest and newest movies but nothing from Roger Moore or Pierce Brosnan’s efforts (who I’ll admit were campy at times but had some of the best car chases). In the end, if you’re willing to carefully read the rulebook a couple times and you love the movies, add a point to the score below. But if you want a really good worker-placement game, stick with something classic like Lords of Waterdeep or Carcassone.

A messy rulebook and overly complicated mechanisms keeps this Bond bad guys game from being #1. Huge fans of the movies might still have a Thunderball.