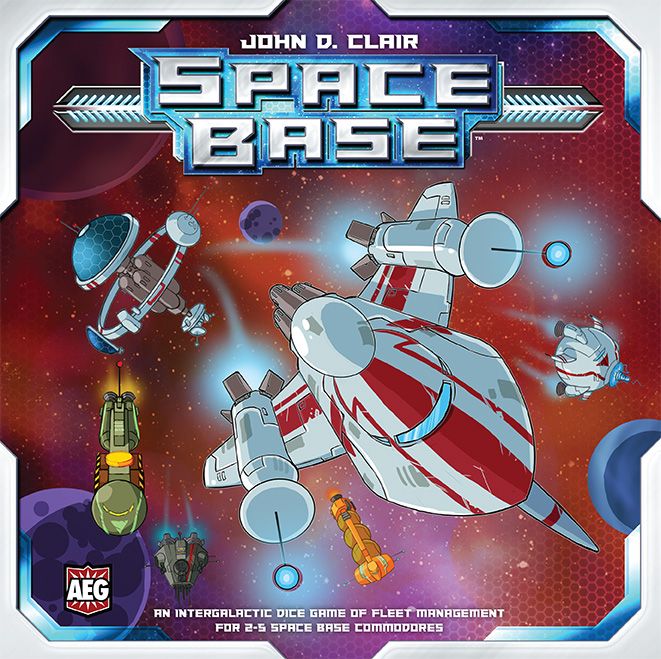 Space Base is a family game of dice rolling and tableau building. In this game, players take turns rolling a pair of dice, after which everyone gets to do something based upon the result. Since all players are involved each turn, Space Base is very engaging and highly replayable.

Space Base has been on my “want to play” list since it debuted in 2018, but with so many new games coming out all the time, it just got lost in the mix and I never had the chance to try it. Recently, I was finally able to give it a go, and I could immediately see why so many people love it.

This game uses the system of “one player rolls, then all players do something,” a system seen in other popular games like Qwixx and Machi Koro, as well. In Space Base, players each control a tableau featuring 12 slots for cards.  Throughout the game, players will purchase cards to add to their tableaus. Once placed, cards can then be activated by the roll of the dice.

Each turn, the active player begins by rolling both dice. All players can then choose to either:

Regardless of which option players choose, they activate the card(s) in the matching-numbered slot(s) on their board. For example, if a 2 and a 4 were rolled, each player would independently choose either to activate the 2 and the 4 slots on their tableau, or just the 6 slot.

When a new card is acquired, it is placed in the sector shown in its upper-right corner. Then, the card that was already there is displaced; it is turned upside down and tucked under the board, above the sector it came from. This is important because cards on a player’s board can only activate on that player’s own turns (providing the rewards shown in blue), and cards above their board can only activate on other players’ turns (providing the rewards shown in red).

In this example, a 3 and 4 were rolled. If it was this player’s turn and she chose to activate the 3 and 4 slots, she would earn the blue bonuses in slots 3 and 4 ($2 + $2). If this result was rolled on another player’s turn, she could still activate the 3 and 4 slots, but she would instead receive the results shown above these slots in red ($1 + $1). The space above a card slot can hold any number of cards, and their payouts stack.

When cards are activated, their effects are carried out. Most often, these involve either gaining resources (credits, income, or VP) or earning charge cubes. Resources are recorded on the 3 tracks at the bottom of the tableaus; to gain a resource, a player simply moves their corresponding cube up the track.

When earning a charge cube, the player places a clear cube on any card that has a space for one. If a card effect requires 1 or more charge cubes, then once it is fully charged up, its ability can be activated whenever the player wishes. (After it is used, the card then needs to be recharged before it can be used again.)

The card in slot 5 has a charge space which contains a cube. That means the card’s ability is ready to be used.

At all times, there are 18 cards available in a central market: 6 cards each in 3 levels. In general, the higher a card’s level, the better and more expensive it is. Each turn, the active player may purchase 1 card from the market for its cost (listed in the upper-left corner). In an unusual twist, however, any time a player buys a card, they must spend all their money to do so, even if they have more money than the card is worth. The only way to “save up” money is to forego buying a card.

With this in mind, the income resource acts as the minimum amount of money a player has each turn. If a player’s income cube is at 4, for example, then any time their money drops below this value, it is automatically reset to 4.

When a player reaches 40 points, the current round is finished so that all players have an equal number of turns, and at that time, the player with most points wins!

In short, Space Base is great. It is exactly the kind of game I love: easy to learn, quick to play, and highly replayable. It occupies the same space as games like Splendor, Gizmos, and Century: Spice Road; while it is certainly distinct from these games, it offers the same crisp engine building that makes them so compelling.

Since all players are involved each turn, the downtime of Space Base is minimal. Occasionally in the early game, a player might not be able to take any actions on an opponent’s turn, but things move so fast that this is a non-issue. After a few rounds, players’ tableaus will be developed enough that things will really start cooking and players will be combo-ing left and right.

Forcing players to spend all their money when purchasing a card presents a very interesting wrinkle. On the one hand, like any engine building game, players want to start upgrading as early as possible so their work pays off over a long period of time. On the other hand, the high-value cards are immensely helpful – indeed, they can mean the difference between winning and losing – but it may take several turns of no purchases to save up for one. It’s a subtle but interesting dynamic.

Production-wise, Space Base looks good, though perhaps not great. The components are all functional, but they probably won’t turn any heads at a game night. The rulebook, however, is fantastic. The actual game rules themselves only take up a few pages, but the rest of the 32-page book is devoted to detailed examples and clarifications. It’s easily one of the best rulebooks I have encountered.

Space Base doesn’t do anything terribly innovative, but everything it does works so well that this doesn’t seem to matter. Playing it is a highly enjoyable experience, and like the best engine-builders, gameplay heats up significantly as things progress. If, like me, you love fast-moving family games, Space Base is not to be missed.

Space Base is an awesome engine-building game. It occupies the same space as greats like Splendor, Gizmos, and Century: Spice Road. Definitely worth a try.