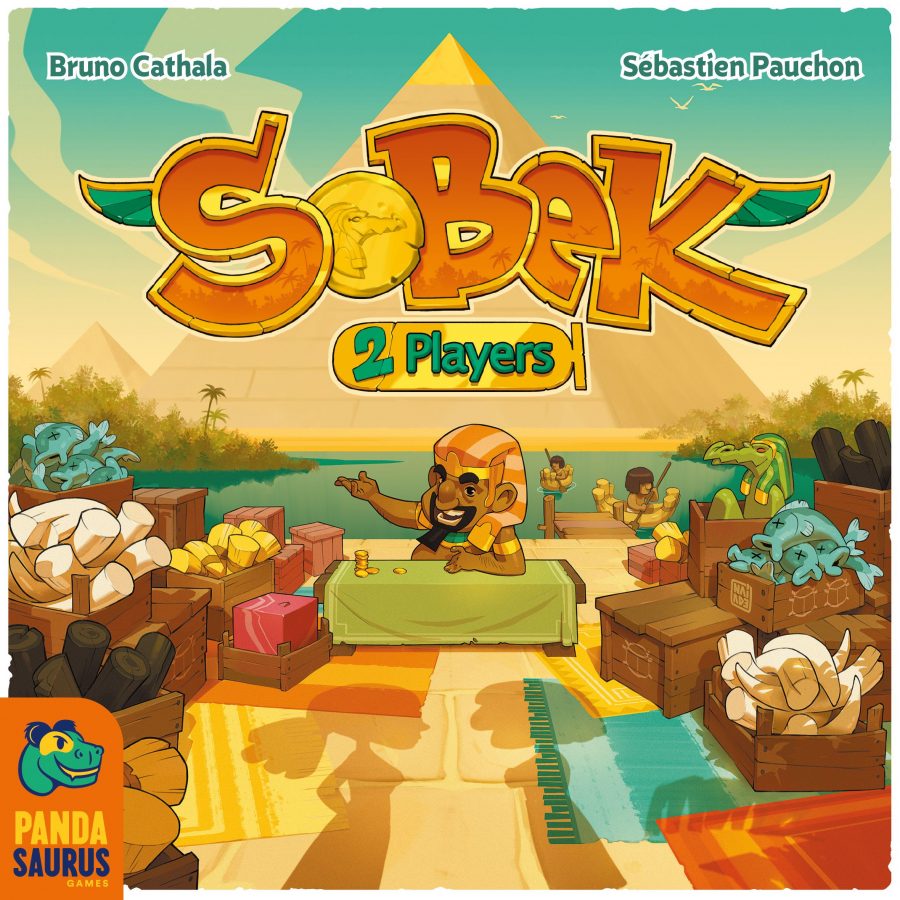 While most of my taste in games isn’t too far off the “norm” among board game geeks, I have a few pet games that I find criminally underated, and Bruno Cathala’s Sobek is one of them. I’ve played the game a lot; as of writing this post, I am still ranked #4 in the world in Sobek on yucata.de. (Somehow, that’s higher than last time I checked…maybe I’ll become #1 on accident!) I felt that Sobek got a bad reputation largely because it was “chaotic” at three or four players, and I agree. I think it should have been packaged as a two-player only game, like its brother in the GameWorks line, Jaipur.

Well, it seems the designer (Bruno Cathala) and his friend Sébastien Pauchon (designer of Jaipur, founder of GameWorks) eventually agreed as the game is back as Sobek: 2 Players. Yet it’s also wildly different: for one, it’s now a tile game instead of a card game. What happened!? Let me tell you a little a bit about how Sobek works so that we can explore the changes in this new version. Two of its main mechanisms inspired two of Bruno Cathala’s best-selling games, Kingdomino and 7 Wonders: Duel. Like in Kingdomino, players score sets of cards by multiplying an icon (scarabs in Sobek, crowns in Kingdomino) by how many cards/tiles they have of that type. Weaker types (fewer scarabs) are more common while valuable types are rarer. Like in 7 Wonders: Duel, some cards are face-down until acquired, in this case these are the “character” cards that make special actions possible. There are also a subset of bonus tokens taken from a larger set, like the Progress (science) tokens in 7 Wonders: Duel.

The unique mechanic to Sobek is corruption. Players can take cards past the immediate one on offer, but the “skipped” cards go face down in front of you as corruption. Ending a round with the most corruption punishes your score very heavily and is often the difference between winning and losing.

And all of those mechanisms are still present in Sobek: 2 Players. In fact, quite a few tokens and character powers are identical to what they were before. So what’s different? The main difference is that the game is played on a grid of tiles rather than with a deck of cards. Most tiles have arrows “pointing” a direction, and you can only take tiles in that direction by moving the pawn on the board. Skipping tiles provides corruption just like before. Characters allow you to orient the pawn any direction, but eventually, the pawn will point at nothing. The first few times, the pawn will move to the center and the market will be refilled, but once there are no tiles left to refill, the pawn just stays stuck, and once a player has no actions left (no character card to play, no set to play), the game ends immediately. This is logical, but wildly changes the endgame. You can no longer “force” the endgame by jumping to the last card, and the game can be much longer or much shorter than you might expect.

Fortunately, getting caught off guard is not as punishing as it once was. The game is now only one round instead of three, and being the most corrupt provides your opponents with a few bonus point tokens. What they can earn is far less than how much you could be punished in Sobek. Furthermore, they earn more dependent on how much corruption you have, while in Sobek, as long as you were the most corrupt, even by a little, you were punished based on how much you scored that round. So now you can score high and if you’re only slightly more corrupt, it will be a negligible difference. Of course, this means you can probably be greedier than before, but only if your opponent shares in your greediness. I’m still wrapping my head around this change — all of the changes, really — but I like them a lot.

There are a few other differences; new tokens and characters based on the tile grid, for example. But it’s impressive how much DNA they kept of the original Sobek. And given that Sobek is one of my all-time favorites, it should be no surprise that I loved every minute of Sobek: 2 Players. So the real question is: is it better? Yes! It’s much more of a brain-burner with the tile grid, which isn’t a bad thing. My only complaint is probably worsened from first learning this game on BoardGameArena: the physical components can be somewhat of a pain. Having to fill the market and make sure that every single tile is oriented a certain way is a bit time-consuming. We’re talking 30 to 60 seconds, but it’s only a 20-30 minute game. It’s a minor complaint; I think this is something we’ll get better at with practice. And practice we will, because this is a game I intend to keep coming back to for a long, long time.

Sobek is back and better than ever.