Review – So, You’ve Been Eaten

Your Corporate Overlords wish you the best of luck, but if you fail try to leave your gear where we can recover it okay? 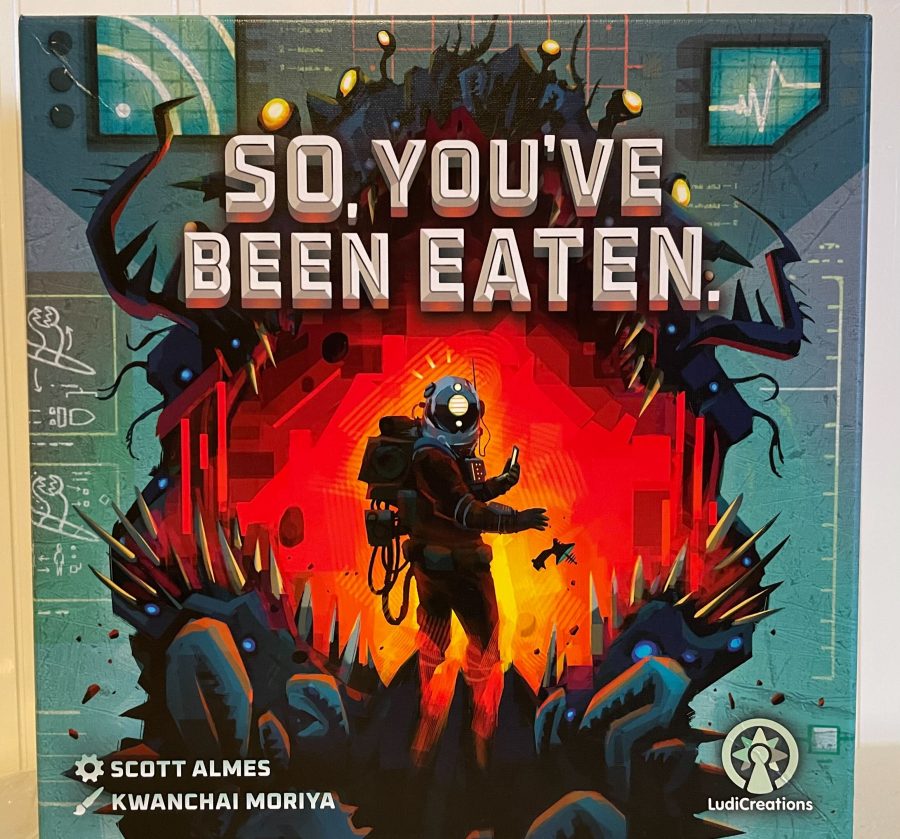 In So, You’ve Been Eaten, 0-2 players play as either miner or beast, with the Space Miner character trying to mine as many crystals in the Beast’s belly as possible while not being overwhelmed by the Beast’s immune system, and the Beast trying to thwart the Miner at every turn and if possible, turn them into a snack. So is it a fun time for all, or just a bit of giant-space-beast indigestion? Read on for the review!

For some reason when I was learning So, You’ve Been Eaten it took me a few tries to understand the rules, but it basically boils down to this: the Miner takes a turn by rolling their 3 dice, taking 3 actions with them, then gets attacked by the nearest bacteria. Then the Beast fills up the Digestive Tract, Acquires an immune response card (or 2) if possible, Draws new Stomach cards up to their limit, and Plays a Mutation Card.

To break that down more clearly, let me explain. The Miner’s 3 actions can be any of the following, more than once if they’d like – Stun: push a bacteria card back to avoid an attack, or set up an Eliminate action. Eliminate is when 2-3 matching bacteria are next to each other, and you get to remove them from the Digestive Tract. Capture allows you to grab a Crystal or once it’s upgraded a Tool from a particular Stomach card. Adjust lets you reset another unused die to whatever value you want, and Upgrade lets you improve Stun, Eliminate, and Capture. Miners will have to balance staying alive with trying to capture as many crystals as possible, keeping in mind that when they’re attacked at the end of their turn (if the attacking bacteria matches the Beast’s Mutation) the Miner will lose 1 of their upgrades. If they don’t have any upgrades, they lose a crystal.

The Beast then takes their turn, refilling the Digestive Tract first. Many of the decisions in the game are catch-22, including this one. If the Beast lines up too many matching bacteria, the Miner could easily take them out with an Eliminate action, but some of the Beast’s Immune Response powers require 2 or 3 matching bacteria to be side by side. Also, the Crystals that are out on the Digestive Tract can be captured, but when they’re out on the board they count as currency towards the Beast getting new Immune Response cards. So while it isn’t wise to give the Miner the exact card they need late in the game, the mechanics incentivize the Beast player to not hoard the Crystals.

So, You’ve Been Eaten ends in 1 of 3 ways. The 1st ending is the Miner got all 8 crystals, jetpacks out, and wins. The “Number 2” ending is if the Beast can’t refill their hand of Stomach cards, the Miner exits out the back, and everyone’s points are tallied. The Miner gets points for each Crystal and Upgraded ability, while the beast gets points for acquired Immune Response cards, and how far each bacteria got on their infection levels. Also the Beast loses points for any Stomach cards with Crystals on them in their hand. The 3rd ending is the Miner gets digested, either by a bacteria reaching the 4th level, or the Beast having 5 Immune Response cards in play at the end of the Miner’s turn.

I loved the push-pull aspect of So, You’ve Been Eaten, and the sarcastic flavor text throughout the manual (“…you will surely progress to a long and profitable* career! *Profit sharing reserved for executive-level staff”) reminding you that your company doesn’t really care about you outside of the crystals you can collect as the miner. I did have some difficulty locking down the rules before I played, but since I can’t think of how they could improve the rules (outside of maybe a turn example played out), I find it hard to hold it against them. But I wish that it was a game for 4-5 players instead of just 0-2, though it’s impressive that they made it so you could play the game against… itself? I just wish more humans could join the fray instead. Also – while the components are top-notch, I had a lot of trouble sliding the Stomach cards from one half of the board to the other, which is annoying because you have to do that every round.

If you like games where a lot can go wrong without managing your actions, and sarcastic unhelpful corporate overlords, you should check out So, You’ve Been Eaten. It’s like a competitive, 2-player version of Pandemic, played out on a smaller scale. It offers a few different ways to play, and many different strategies therein. Just…watch out for the Yellow bacteria, okay?

Besides a couple small areas of polish, So, You've Been Eaten is a solid 2-player game with strong, catch-22 choices throughout.