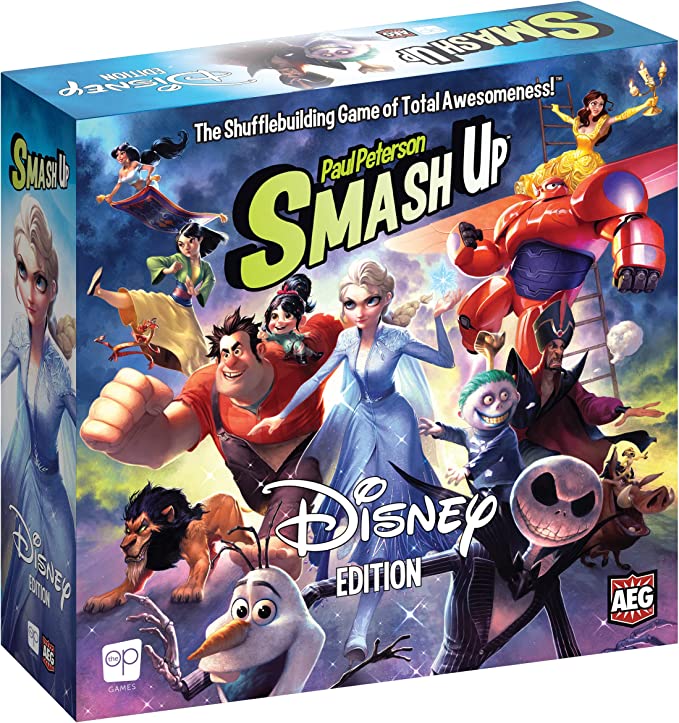 Everything’s getting a Disney edition these days, so why leave Smash-Up out? Paul Peterson’s shufflebuilding game of total awesomeness has been going strong for almost 10 years now, and now’s the time for a Disney version… or is it?

Short caveat: I’m not a huge fan of Smash-Up. I think the idea of combining decks (shufflebuilding) is cool, but the strategy wears thin during the 1+ hour playtime. Let’s see if the Disney version addresses my gripes with the original Smash-Up.

In Smash-Up, players pick 2 faction decks, shuffle them together, and play cards from their hand onto bases. Once a base breaks (hits the max power limit), players receive points based on who had the most power. Characters and abilities often manipulate a player’s power presence on a base, and not all bases are created equal, so knowing when to stack your power on a base is essential to winning.

For instance, say a base breaks (scores) at 19. John has 8 power on it, Susan has 5, and Marshall has 4, making for a total of 17 power. It’s Susan’s turn, and she seizes the opportunity by playing a 4-power character onto the base, which bumps her to a 9. John and Marshall don’t have any special cards that can be played while the base is scoring, so the final standing is Susan 1st with 9 points, John 2nd with 8, and Marshall 3rd with 4. Those players would score the appropriate number of points.

There’s some strategy here when it comes to where to place your characters, what special abilities to save for later, etc. Cards come in the form of characters, character modifiers, and abilities which manipulate the rules of the game, change a base’s breaking point, or allow you to move your characters around to different bases. Scumbagging opponents when a base breaks is a great joy, and arguabley a top-2 fun factor for this game. The other top-2 fun factor is choosing which 2 factions will make up your deck.

Not all factions are created equal (this is asymmetric, after all), but players can often balance this out by choosing complementary factions. Beauty and the Beast and The Lion King both grant effects for discarding cards, Big Hero 6 and Mulan boost your characters’ power levels, Frozen allows you to build up for some big-time turns, Aladdin lets you retrieve discarded cards (whether from your or someone else’s discard pile), Nightmare Before Christmas comes with a ton of helpful (or harmful) modifiers, and Wreck-It Ralf grants bonuses for moving characters from base to base. So the factions’ powers loosely follow a theme from their respective movies.

Even from that list, you can imagine some fun deck combinations. How about building up for 1 big turn of power-stacking with Frozen and Mulan? Or what about modifying characters and having them summon other characters when they’re discarded with Nightmare Before Christmas and The Lion King? If I had 1 critique of the factions, it’s that Mulan and Big Hero 6 feel very similar.

The components are standard for Smash-Up games: engaging art, good card stock, and serviceable cardboard chits. However, Smash-Up: Disney Edition adds larger cards to hold bases, which also include markers for the base’s breaking point and current power level. These are helpful, but not perfect, as they are easily knocked and scooted across the table. I still prefer using the Carbon app for keeping track of how much power each base has.

Smash-Up: Disney Edition suffers from the same faults as the original Smash-Up. At low player counts, the game is too bland; at higher player counts, the game is interesting for a while but ultimately too long for me to consistently enjoy. Something the Disney edition does well, however, is make the main characters of each faction really powerful. They seem to be more overpowered than the leaders of the original Smash-Up factions, and I like that. It’s Aladdin and Mulan, for crying out loud! They should be able to kick some serious butt.

If you want to smash-up Smash-Up with Disney, this is the way to go. It’s fun to see movies unite against each other, and all of these are compatible with every other Smash-Up expansion, so you can get something crazy like Zombie Aladdin. Personally, Smash-Up: Disney Edition doesn’t include different enough content to be worth pursuing. It’s the same-old Smash-Up formula, for better or worse. Add 2 points to my review score if you like OG Smash-Up. If you like Smash-Up and want some Disney characters, or if you’re only just now interested in Smash-Up because of the Disney characters, give it a look. Otherwise, you’re not missing out.

The OP and AEG kindly provided a review copy.

It's Smash-Up, but Disney, for better or worse.