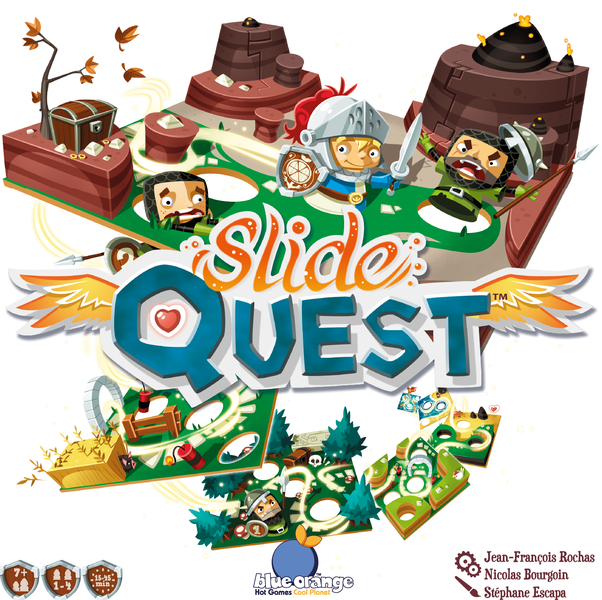 Slide Quest is a video-game-inspired board game of sliding a knight figure along a wobbly board. It feels like a mixture of The Legend of Zelda and those tilting marble-labyrinth games. Absolutely amazing, and fun for all.

If you asked me a month ago what my favorite best Blue Orange game was, I would have said Kingdomino. I absolutely adore its Spiel-des-Jahres-winning simplicity, its spatial puzzle, and its drafting system. Everything about it just works.

If you were to ask me the same question today, however, Kingdomino might have a competitor for that title.

Slide Quest calls itself a “Video Game Board Game,” and that seems like a perfect description. In this cooperative game, players maneuver a tilting board to advance a brave knight through different “levels.” Each level has its own challenges and obstacles, be they simple things like boulders and gates, or challenging things like dynamite and monsters. And, of course, no old-school video game would be complete without tons of pits to fall into.

The game box is a key component of play. To set up, players place a plastic grid inside the box, held aloft by four yellow levers.

Pressing these levers makes the board tilt; mechanically, it reminds me of those wooden labyrinth games where players tilt the board to roll the steel marble to the end.

Each “level” consists of a different grid overlay, showing a starting and ending point for the knight. His figure has a ball-bearing in the underside, so he slides with ease.

To complete a level, the knight must fulfill its objective(s) without losing too many lives (tracked on a “health-bar” type tile). In the first level, the objective is as simple as “follow the path to the end,” but later levels involve blowing up doors, knocking enemies into pits, etc. And to make things harder, players have to do these things within a certain time limit!

Occasionally, levels offer “extra life” power-ups, but because the clock is ticking, players won’t always have time to grab them. (If you look really closely, you can actually see one in the far corner of the level above, hidden behind the gate and right next to a hole.) They are usually out of the way of the normal path, which makes them more difficult to acquire.

The obstacles present interesting challenges. If a level contains dynamite sticks, the knight must be careful—if dynamite tips over or falls in a hole, it goes kaboom and the knight loses a life. When monsters are present, the knight must knock them into a pit (sometimes, a specific pit) in order to complete the level.

Players can set the length of their game by deciding how many levels they would like to play. Additionally, the game includes a “save” feature, in which players can record their current level and health, making it easy to pack up the game and return to the game later, without losing their place.

I cannot overstate how well Slide Quest captures the flavor of a video game. It has everything: enemies, boss monsters, hazards, collectibles, a health meter, a timer, saving the game, blowing up doors, falling into pits… and the list goes on. Even the physical action of rocking the levers reminds me of using a joystick—they have to be pushed juuuust right, not too much, not too little.

The game obviously looks great; its toy factor is off the charts. I could spend an entire evening playing Slide Quest and not get bored. (I know this, because I’ve done it multiple times.) The one, single downside to this game is that the level boards are not double-sided. Slide Quest comes with 20 levels, so it offers a ton of replay value, but it seems like a missed opportunity to not have doubled that number for the same manufacturing cost. Basically, I like this game so much that I’m sad there isn’t more of it! (I will be waiting with bated breath for expansions!)

Some of these levels are SUUUUUPER hard.

Like many Blue Orange games, Slide Quest is entirely about the play experience. It doesn’t have the meaningful decision-making of Kingdomino, Photosynthesis, or Planet, but it is just plain fun in the purest sense—silly, lighthearted, and laugh-inducing, everything a game should be. Even though it is brand new, it feels oddly nostalgic, like the kind of game I might have spent a lazy summer day playing as a kid.

Slide Quest is a serious contender for my “Favorite Game of 2019.” It takes the action/dexterity genre to a new height while perfectly encapsulating that retro-Zelda vibe. Whether or not you are a gamer, Slide Quest has something to offer you. This game is an absolute home run, and I cannot recommend it highly enough.