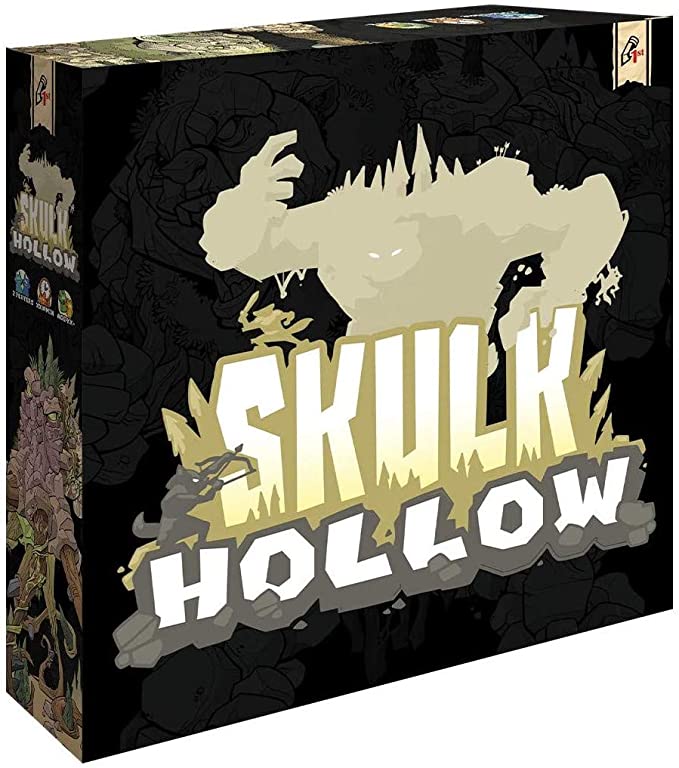 Skulk Hollow: the battleground where the scrappy, resilient Foxen Heroes defend their home against a guardian of ancient legend! Skulk Hollow promises a fresh, engaging, asymmetric 2 player experience. Let’s see how it plays!

In Skulk Hollow, 1 player will take control of the foxes trying to defend Skulk Hollow from a freshly-awoken guardian controlled by the other player. The foxes are versatile but consistent game-to-game. There are 4 unique guardians for players to choose from, which will dictate how the foxes play and, of course, how the guardian plays.

On your turn, you’ll perform your guardian-specific or Foxen Hero-specific number of actions, then cleanup. For an action, you’ll play a card and execute an ability on the card, or discard a card and draw 2 more. You can also spend power cubes from characters to perform actions with them for free. During cleanup, you’ll assign the power cubes you collected in your power pool to your characters and draw back up to your hand size.

There are 4 guardians available: Grak, a bear who must simply eliminate 8 enemy units with his strong attacks; Adopa, a centipede who must collect its 4 rune tokens and burrow its way back to its lair via movement cards and agile attacks; Tanthos, an octopus (rocktopus, if you will) who must spread its 6 roots (tentacles) out across the map, simultaneously protecting them and attacking the Foxen Heroes with them; and Raptra, a humanoid eagle who must eliminate all non-leader enemy units using its flight ability.

Gameplay is engaging and can be quite fast-paced after both players have played a game or 2. Players will know what actions their opponents can perform, but they won’t know what cards their opponents hold, so Skulk Hollow turns into an exciting strategic/guessing game of maximizing your strategy while trying to protect yourself from your opponent’s more powerful moves.

The rulebook is colorful and visually pleasing, but it could have been written in a way that’s less confusing. When you actually play the game, it’s way less complicated than the rulebook makes it seem, and I wish they would have included a short step-by-step example of what a round of play looks like.

The artwork is fun, even if it doesn’t wow. The Foxen Heroes are scrappy-looking and silly. The guardians are cool, and their oversized meeples and boards represent their fearsomeness well, but they all look like they were made from the same material. This makes sense when you read the game’s lore, but it seems like a wasted opportunity for these cool creatures to all be made of rocks and trees. Skulk Hollow includes a page of backstory/world-building and a fun map of Skulk Hollow.

My main critique is that the guardians are not as versatile as the Foxen Heroes. I know there are 4 of them, but even though they look cool and have some special powers, the Foxen Heroes felt more developed as a deck. The novelty of each guardian is there, but in a dueling game, I prefer more strategic options. As it is, you pretty much know what to expect from each guardian. However, that doesn’t make each repeat battle entirely predictable.

The Ancient Relics mini expansion essentially adds a way for players to perform additional actions without using power cubes. When players take the prepare action (discard 1 card to draw 2), there’s a chance an ancient relic will spawn in a random location. Ancient relics are used to perform additional actions. This is a nice expansion in that it’s not too difficult to learn, and it allows for additional strategic depth. For instance, on a waiting turn, a player could look for ancient relics in order to prepare for a bigger turn later.

Skulk Hollow’s gameplay reminds me of Memoir 44’. Obviously, there’s a lot more asymmetry here, but playing cards to move your units (or unit, in the guardian’s case) and attack your enemy for a specific objective is the same. The game offers strategic opportunities, like Memoir 44’, but it’s pretty teachable and simple once you understand the rules. Sometimes, you don’t get the cards you want, but the good news is these games are usually around 30-45 minutes, so you can enjoy clobbering a giant rock/tree monster as the Foxen Heroes or playing whack-a-fox as a guardian for a reasonable amount of time.

Aside from the theme, what separates Skulk Hollow from other card-based combat games is the well-balanced asymmetry, the quality components, and the world-building. I wish the guardians were as deeply strategic as the Foxen Heroes, but they’re still fun, and I can see younger gamers getting a kick out of playing a Godzilla-like game. Check it out if you’re looking for a fresh, card-drive, combat-heavy 2-player game.

Great components and some interesting ideas held back by the guardians' lower versatility.