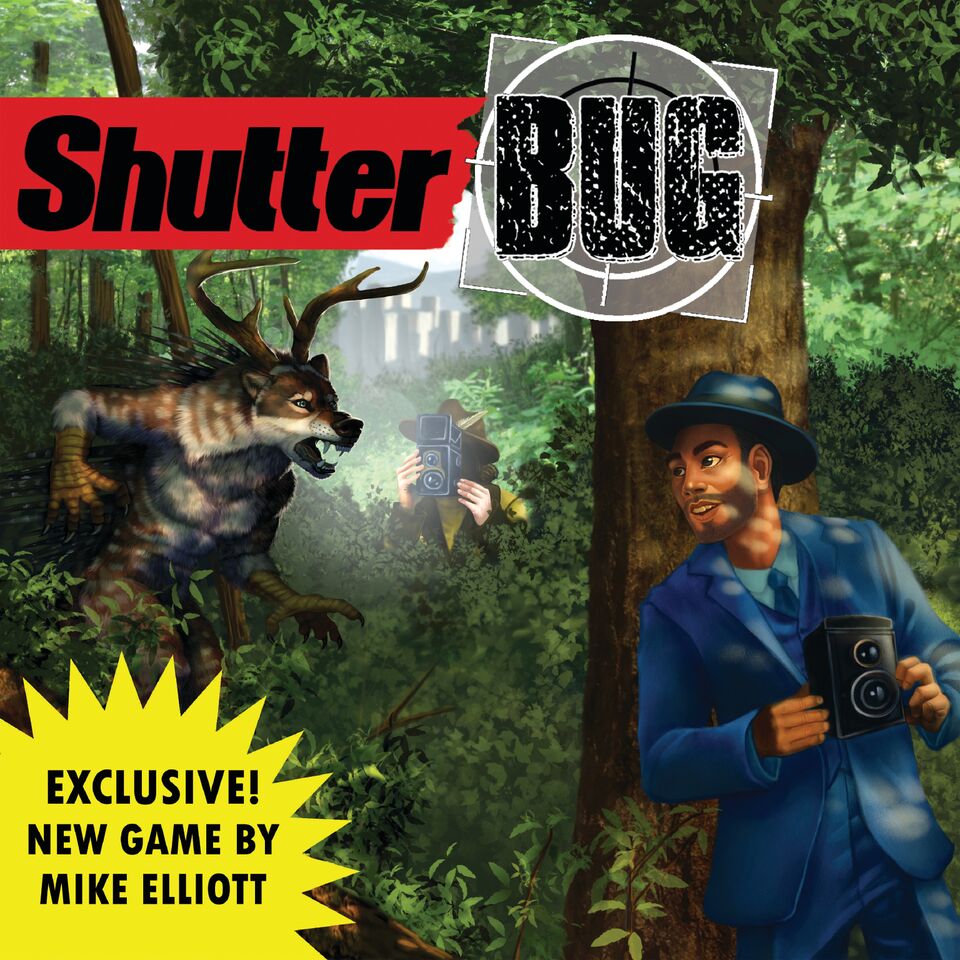 Shutterbug is the third installment in the latest wave of Calliope Games’ “Titans” line. This light family game is easy to learn, quick to play, and fun for all ages.

If you’ve read my other reviews, you’ll know that I gravitate toward games with strong, original themes. It’s not a requirement, and I enjoy plenty of games that lack thematic immersion, but there’s just something about a game that makes me feel like I’m piloting a spaceship, digging for treasure, or conquering the planet Arrakis.

Of the three new “Titan” games from Calliope, I was the most excited about Shutterbug, primarily because of its awesome theme. In this game, players are 1930s tabloid photographers, trying to snap career-defining shots of strange creatures rumored to be roaming throughout America. Players must travel around the country, wresting their way through the wilderness in search of these Bigfoot-esque beasts. I was intrigued.

The game is played out on an abstracted hex-map of the United States. The board features six types of land in which the creatures can be found. Also included is a draw bag full of “photo tiles,” each corresponding to a certain space on the board. These represent the particular picture players can capture in that space, along with its relative image quality, ranging from one to three. Naturally, the better the picture, the more it’s worth.

Everyone receives two individual “assignments” from the tabloids. These are essentially players’ overall game objectives, and they will choose one of them to score at game end. Assignments indicate particular creatures, of which players must get some number of photos. To help with this, players also receive a hand of “tip” cards, which will be required to snap said photos. Pawns are placed on city spaces, and play begins.

A game of Shutterbug lasts eight rounds. On a player’s turn, he begins by populating the board with photo tiles. From the bag, tiles are drawn and placed on their indicated locations until seven spaces have them. The current player can then move his pawn up to three spaces. If he passes through one of the cities, he may draw a tip card, and if he ends on a city, he may draw two.

When a player enters a space with another player’s pawn, the two may “trade tips,” thematically sharing rumors with fellow freelancers about creature sightings. To do this, the active player selects a card to give to the opponent, and takes one blindly from his or her hand in return.

If a player stops on a space with a photo tile, he may spend tip cards to “take a picture,” earning him the tile. Tip cards each have two characteristics: a creature and a landscape. In order to take a tile, the current player must spend a number of tip cards equal to the photo’s image quality. At least one of these cards must show the corresponding creature, and the rest, if any, can show either the creature or the landscape. For example:

To claim this photo tile, a player on the space would have to spend two cards, per the image quality. At least one card must show the creature, and the other may show either the creature or the desert landscape.

This player has decided to score the right half of his assignment. For the first two creatures shown, his total photo value meets or exceeds the listed requirements, so he scores for both sets of photos (2 + 2 and 3 + 2). However, he did not get a strong enough image of the third creature, so he scores nothing for it. (If his image was one point better, or if he had a second photograph, he would have scored!) Since the last photograph shows a creature that is not part of his assignment, it scores no points.

Players can also earn points from “side jobs,” which add a small set collection element to the game. If a player possesses, for instance, a photo from every landscape, he can score some bonus points. In the example above, the player completed a side job since he has a photo of every creature. Additional points are awarded if players end the game on city spaces. The player with highest score wins.

Of all the “Titans” games I’ve played, Shutterbug is probably my favorite. It features the best production quality I’ve seen from Calliope, with a fun little game underneath. The cards, tokens, board, and draw bag all look and feel great. The art is attractive and colorful, the graphic design is clean and intuitive, and the game system works nicely.

On the whole, the theme really comes through, but there is one facet that doesn’t seem to fit. Namely, it feels odd that the photo tiles list their image quality, such that players know how “good” a certain picture will be before they take it. I certainly understand why this design choice is in place; it informs players’ strategic decisions, since they know exactly what they’ll get at a particular location. It just doesn’t feel thematic. In real film photography, it’s not clear how an image will look until it’s been developed. It might come out blurry, it might be too dark, or it might be perfect, but you never know until you see the finished product.

This is a rare situation in which I would have actually liked more luck, simply because it would better fit the theme. I could totally see a system in which photo tiles were sorted face-down, by creature, and when a player snapped a picture, he  would have to draw from that creature’s pile to see how the image looked. Even though it would add a bit of randomness, it would really gel with the photography concept. Regardless, the game plays well, and as I said, I do understand why it’s the way it is.

One major plus in Shutterbug is that players always seem to have something worthwhile to do; turns rarely feel meaningless or wasted. Even if a player is unable to photograph a creature they really want, he can probably work toward a side job or gain new cards. Without becoming overwhelming, this game presents players with enough choice to give them a sense of agency.

Shutterbug scales alright, but it might slow down a bit with five or six players. It feels like the perfect length as a smaller-group affair, and it really shines as a two-player game. With a great theme, quick play time, and awesome production, I am very pleased with Shutterbug. If tracking mythical beasts sounds like your thing, I highly suggest giving this one a try!