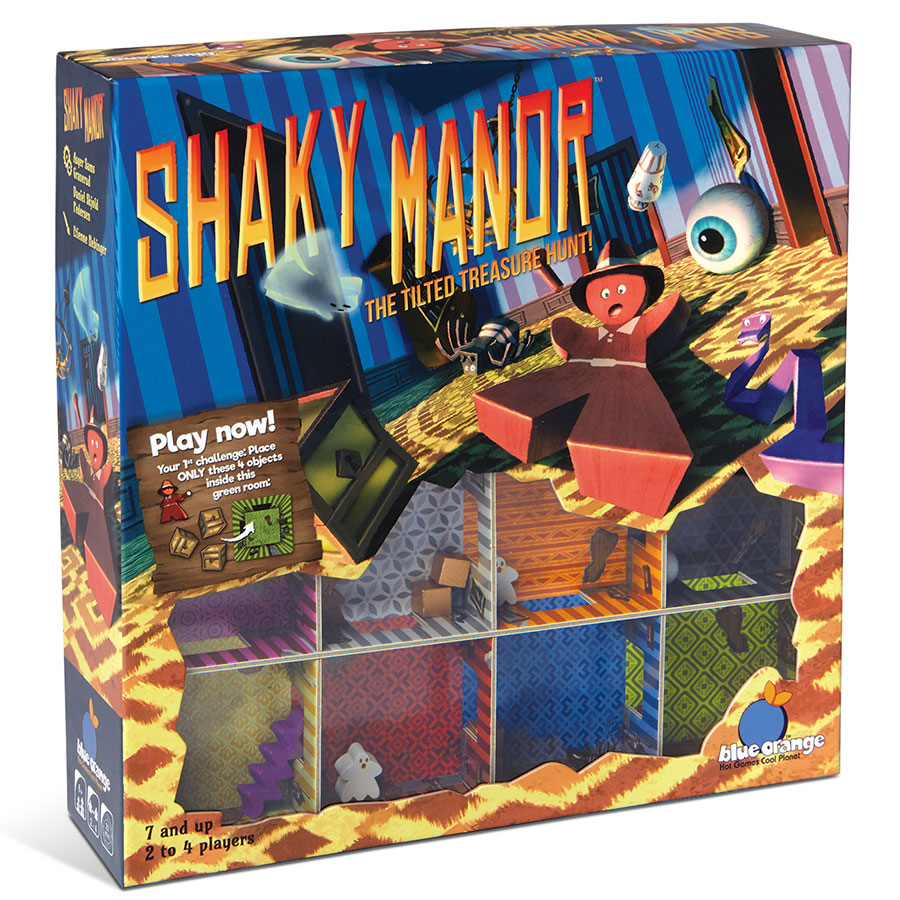 Shaky Manor is a dexterity game from Blue Orange, a company known for making high-quality family and children’s games. It is a speed-based game that involves tilting and manipulating a three-dimensional board to move pieces between rooms of a mansion. This fast-playing is great for kids, but adults can enjoy it as well.

As you enter the creepy old mansion, everything starts to rumble! Is it an earthquake? Is the house alive? Was that a giant eyeball that just rolled by?

In Blue Orange Games’ new release, Shaky Manor, two to four players are explorers, searching a ghost-infested house for treasure. In a fast-paced dexterity challenge, players must tilt and shake the terrain in order to get certain items together in one room of the house.

All players are given a three-dimensional “board,” representing the manor. Each of its eight rooms are color-coded and separated by walls and doors.

In addition to the house itself, everyone receives a set of items, which include eyeballs, ghosts, snakes, spiders, treasure chests, and of course, the intrepid explorer. These pieces are dropped randomly into each house, and a deck of cards is placed in the middle of the table. The backs of the cards show a particular room of the house, and the fronts show a grouping of the above items.

Acting in real-time, players tilt and maneuver their manor boards to get the listed pieces to the indicated room. The first player to do so wins the round and takes the card, earning one point. In the image below, the player has completed the objective, because all four items shown on the card are in the white room. When someone gets to five points, she wins.

Shaky Manor is absolutely perfect for Blue Orange’s catalog. If someone showed me this game and I didn’t know who published it, I would immediately guess it was them. In the same vein as other Blue Orange titles like Dr. Eureka and Go Go Gelato, Shaky Manor provides players with clever puzzles that test dexterity and speed.

Though there is not much “game” here, it’s still enjoyable to play. Like many other products from this publisher, Shaky Manor is aimed at kids, but my adult game group got a laugh out of it as well. There are actually two modes of gameplay, which I really like. In place of the ruleset described above, players can begin with one ghost, three treasure chests, and the explorer, their goal being to get the explorer to the treasure and avoid the ghost. In this version, each time a player wins a round, an opponent may add an unused piece to that player’s manor, making future rounds that much harder for her. In this way, the difficulty ramps up as players get closer to victory. It doesn’t really change the core of the game, but it’s nice to have some variety.

The pieces themselves provide interesting challenges. The spherical eyeballs, for example, move very differently than the ghost or explorer meeples. Similarly, the rubbery spiders have a bit more traction on the board than other pieces, and the snakes can be tricky to fit through doors. Players have to contend with differently-shaped objects rolling, sliding, and bumping into each other.

It’s all fun and games until someone loses an eye.

This game reminds me of those wooden labyrinth marble games, but with a dose of real-time stress thrown in. The production is very nice; I’m not too fond of the cover art, but I like that the “window” feature on the box allows players to see and try the game before they buy it. The manor boards are durable, with vivid colors, and the item components are nicely detailed.

Shaky Manor is an enjoyable kids game. I recommend it to families with younger gamers; say, seven to ten years old. The parents will have fun with it, and the kids will be able to hold their own.

(As a side note, allow me to be the first to suggest Shaky Manor Xtreme: 3-Story Edition. I’ll be waiting, Blue Orange.)