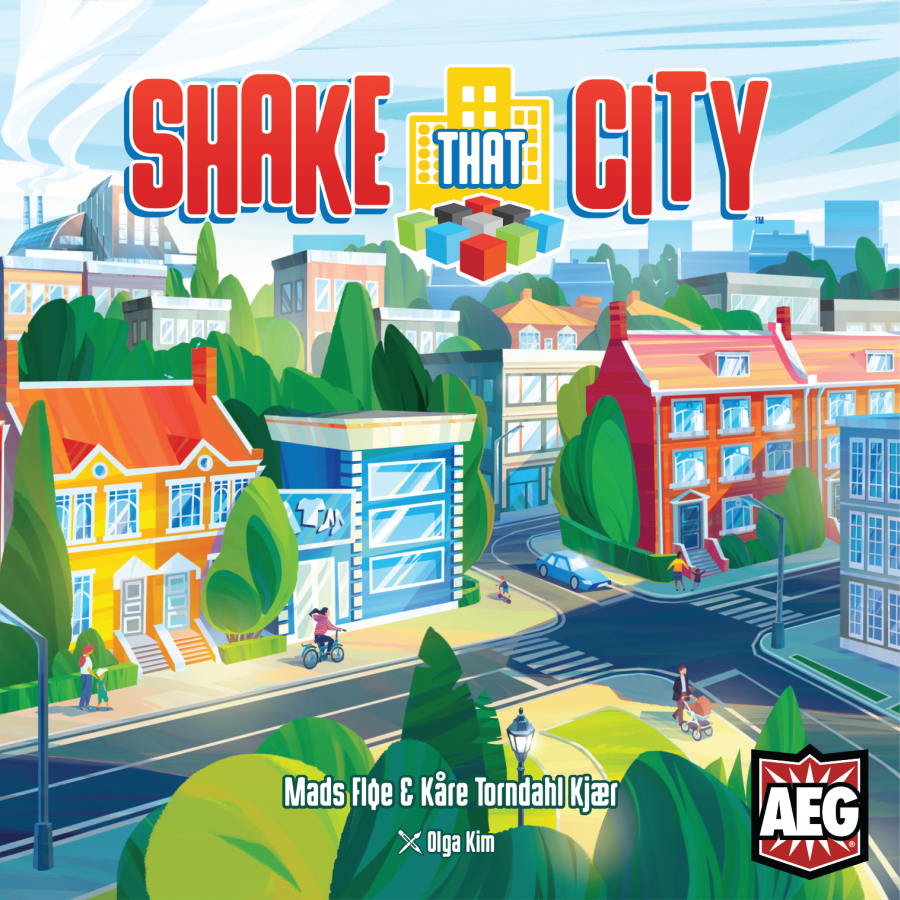 Shake That City is an upcoming family game from AEG. It introduces a so-called “cube shaker” mechanism—is it just another gimmick, or does it enhance the game experience? Let’s check out how to play!

In Shake That City, 1-4 players are urban planners competing to build the best, most vibrant city. The goal of the game is to earn the most points, as determined by building placements and endgame bonuses.

In each of the 15 game rounds, a “cube shaker” drops a 3×3 grid of colored cubes, which players use to build their cities. Cubes come in 5 colors, in quantities ranging from 5 to 8.

To use the shaker, all the cubes are loaded into the top, and the box is jostled around to mix them up inside. Then, with the shaker on the table, the active player pushes the tab, ejecting 9 cubes in a neat grid. (If you’ve played Camel Up, this device is kind of like the dice-roller pyramid in that game.)

The active player then chooses a color represented in the cube display and adds building tiles of that color to their board in the same configuration as in the grid. (Rotations and mirroring are not allowed.) Once the active player has chosen their color, all other players do the same action using a different color. In this way, everyone can add tiles to their city each round.

In the vein of other city-building games like Tiny Towns or Between Two Cities, the different kinds of structures in Shake That City each have their own scoring criteria. Roads, for example, want to connect to the road edges of the board; houses want to be in groups, but not next to factories; parks want to be next to both houses and factories; and so on. Additionally, the rows and columns of the player tableaus offer bonus points if certain conditions are met, such as 4 shops in a single row. At the end of the 15th round, scores are tallied and the player with the most points wins.

This game feels like a cousin of Tiny Towns, another AEG game I really enjoy. The fun of Shake That City comes from using the available options—options that are rarely perfect and get tighter as the game progresses—to try to maximize the value of the city. I have seen similar ideas in other games before (again I’ll reference Tiny Towns), but never executed in this way.

The cube shaker is obviously the core of this game. Though it may be a gimmick, it’s a gimmick that works; indeed, the game could hardly exist without it. The device itself is generally reliable, but occasionally it drops fewer than 9 cubes. When this happens, players are supposed to scrub all the cubes that were dropped and try again. This is rare, however, so it is not a major issue. On the whole, the shaker is a cool idea, definitely something gamers will not have seen before. Additionally, clean graphic design makes the game-state easy to read at a glance, and the double-sided tableau boards provide some extra variability.

Given that everyone is involved in every round of play, Shake That City keeps players engaged at all times. What’s more, since all non-active players place their tiles simultaneously, the game length remains pretty consistent—around a half-hour—regardless of player count. In terms of interaction, Shake That City is fairly “multiplayer solitaire,” but this doesn’t bother me. It’s the type of game where everyone focuses on their own puzzle without worrying about what their opponents are doing. As such, it’s a very friendly jaunt.

I expect that this game will do well when it releases, and for good reason. With a unique core system, a light ruleset, and a quick playtime, it is poised to become a popular family game—don’t be surprised if you see it moving up the BGG rankings.

Shake That City tries something new and mostly succeeds. The core mechanism is gimmicky, but it's a gimmick that works. Recommended for fans of light puzzle games.