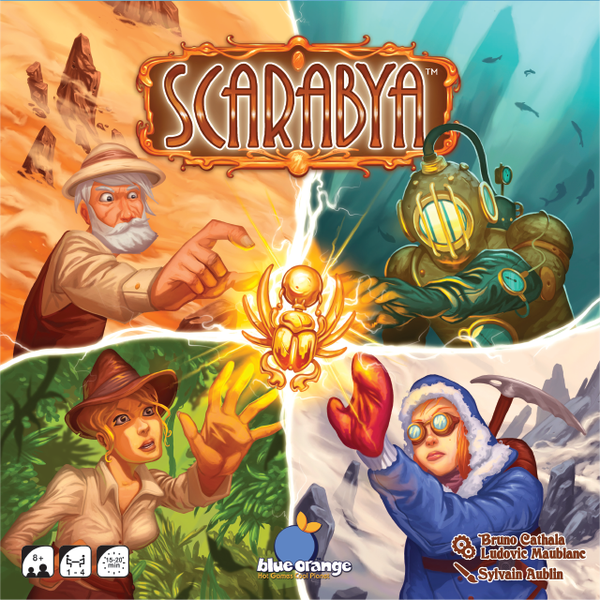 Scarabya is the latest game from prolific designers Bruno Cathala and Ludovic Maublanc. True to their design styles, it is a clever puzzle game for all ages.

I love games in which everyone gets the same puzzle, but they all solve it differently. Games like Karuba, Ricochet Robots, and Dimension all see regular play in my game group, and they never seem to lose their luster. Scarabya is the latest offering from Blue Orange Games, and it has quickly joined the ranks of these other great titles.

To begin Scarabya, players assemble their individual boards such that they are all identical (i.e. all four tiles are in the same orientation). The setup is random, but it must be the same for everyone. Each tile has two “holes” in it, in which the plastic rock pieces are placed.

Here is an example of a player’s starting tableau:

Notice that the board shows a number of scarab beetle icons. These are extremely important, as they are how players score the points they need to win. The goal of Scarabya is to use polyomino tiles to create enclosures around these icons. Enclosures can be up to four spaces in area. To illustrate:

In this example, the blue player just completed a four-space enclosure. (It should be noted that rock pieces and the edge of the board may be used as boundaries.) When a section of 1 to 4 spaces is completely surrounded, each scarab icon in the area scores points equal to to the number of spaces in the enclosure (1 to 4). Thus, to continue the example, the blue player would earn eight points for this enclosure (2 scarabs x 4 spaces = 8 points). Circular scoring tokens are placed on the scarabs when scored.

The game lasts twelve rounds. At the start of each, a card is revealed, showing a tile that everyone must place on their own board. Players’ first tiles must touch one of the center spaces, and all future tiles must share at least one edge with an existing tile. In other words, players start in the middle and expand outward.

As enclosures are completed, players add scoring tokens to their board. At the end of the game, the players with the most points wins.

Scarabya is a very clever puzzle game. With a mere fifteen minute play time, it moves along at a nice clip, and its super-simple ruleset makes it highly approachable. The depth of play reveals itself quickly, as players realize the staggering amount of choices they have with each tile placement.

The board tiles are expertly designed to force tough decisions. Players will want to strategically use the rock obstacles to their advantage, but all too often, they simply get in the way. Similarly, players will likely have to place tiles that cover scarab icons throughout the game. This is never desirable, of course, but especially near the end, there may not be another choice. Players often have to sacrifice potential points one way to earn them another way. It feels like a balancing act.

Scarabya can theoretically accommodate any number of players, provided enough copies of the game are available. Because each person is doing his own, independent puzzle, the game should last about the same length of time with four players as with eight, twelve, or even more.

The one minor issue I have with Scarabya is that the board frames are a bit too large to snugly fit the tiles. This doesn’t affect gameplay in any way (in fact, folks can easily play without the frames altogether), but it’s just odd.

Other than that, though, the game’s illustrations are eye-catching and attractive. It is a nice touch that players’ boards each have their own thematic landscape. Visually, everything looks great on the table—especially the three-dimensionality of the rock pieces. The graphic design and production didn’t have to be as detailed as they are, but the game is better for it.

All in all, Scarabya is a very enjoyable experience. This game strikes a great balance between depth and complexity, and I highly recommend checking it out. It is engaging enough for gamers, light enough for families, and clever enough for puzzle fans. I expect to get a lot of play out of this one.