Raccoons, otters, and lizards, oh my! 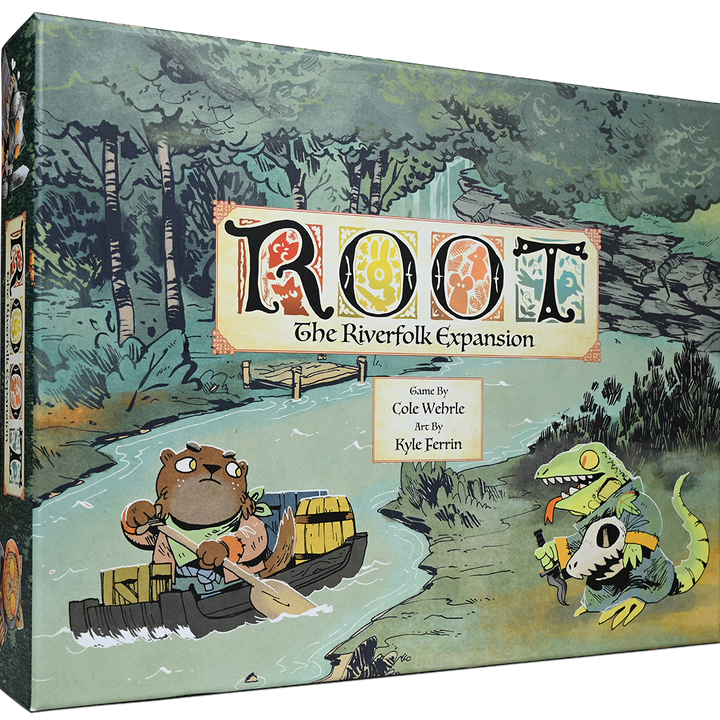 It’s no secret Leder Games’s Root is good. It’s currently #16 on Board Game Geek’s war games and #26 overall. Given its asymmetrical nature, there’s built-in room for growth, so along came The Riverfolk Expansion, the first of many Root expansions. But does this first expansion merely offer tweaked ideas from the base game, or is there something more substantial here?

The Riverfolk Expansion allows 1-6 players to play Root and comes with 4 main gameplay add-ons: the Lizard Cult faction, the Riverfolk Company faction, a card-controlled AI called Mechanical Marquise, and an additional Vagabond. The 2 new factions are the main selling points, especially now that The Clockwork Expansion is out, so we’ll jump into those first.

The Lizard Cult should really only be played in games with 3 or more players. It’s a catch-22 faction in that the more gardens there are on the map, the more victory points they can accrue, but if any gardens are destroyed, the Lizard Cult must discard a card, which means they essentially lose a precious action on their next turn. Having multiple gardens destroyed between turns makes for an uneventful recovery turn. The Lizard Cult can also score points very quickly, so they need to be kept in check by other players, which is usually feasible, especially if Marquise de Cat is playing.

The Lizard Cult quickly became my favorite Root faction. They’re cute, they have a ton of warriors (though rarely will you have many out on the board), and they sneak and surprise opponents. An effective strategy with them is to incite other players to attack the Lizard Cult’s warriors because defeated defending warriors are immediately converted into acolytes. Converting other players’ warriors only to force those players to kill the warrior you just converted all in the name of gaining more acolytes and messing with other players is so much fun.

The only bot from The Clockwork Expansion that has a definite weakness to the Lizard Cult is Mechanical Marquise 2.0, but that can be fixed by adding a few more modification cards. However, don’t expect the Lizard Cult to be able to compete with an aggressive Vagabond (the Lizard Cult’s attack prowess is essentially nonexistent, so they are sheep awaiting a vengeful Vagabond’s slaughter).

The Riverfolk Company is essentially a merchant/mercenary faction. They compare most closely with the Vagabond, but even that is a loose comparison. The Riverfolk Company’s hand of cards is always available for other players to purchase from. Opponents pay the designated cost set by the Riverfolk Company (1-4 warriors), and the Company then uses those warriors to perform actions and gain victory points. The other 2 things players can purchase from the Company are riverboat passages (allowing players to move along the river) and mercenaries, allowing the purchasing player to treat the Company’s warriors like their own for battle and rule.

These merchants/mercenaries are the most unique Root faction I’ve played with, but it can be a frustrating time if nobody buys any of your services, since you are so dependent on other players purchasing from you. You do set your prices at the end of each of your turns, so you could always make sure they are low, but at the end of the day, if you don’t have something someone needs, they won’t buy anything from you.

The additional Vagabond is a nice inclusion, and the 3 new Vagabond cards are fun alternatives (especially the Scoundrel, which allows the Vagabond to essentially nuke a clearing, destroying all pieces and preventing any pieces from being placed there in the future). Nothing really big is here, but the option of playing a game with 2 Vagabonds is welcome. I personally like that the Vagabond is the 1 faction in Root who isn’t an army, so having 2 of them somewhat diminishes the asymmetric nature of the game, but the Vagabonds have different variations as far as their special powers go, so I can see why some people would really enjoy having 2 Vagabonds.

On par with other Leder Games titles, the components are very good. The cardboard chits and player boards are thick, the wooden meeples are cute and solid, and the cards are standard Root quality. Kyle Ferrin’s artwork continues to please. The Lizard Cult is especially fun because their cute portraits, tongue-hanging out, are a goofy contrast to their play style.

I’m a bit torn on this one because The Riverfolk Expansion adds my favorite faction to the mix (Lizard Cult), and it also adds a very unique faction (Riverfolk Company), but the Vagabond and Mechanical Marquise don’t add too much to the game. I almost wonder, now that it’s been 4 years since The Riverfolk Expansion hit the shelves, if Leder Games could release a smaller expansion with just the 2 new factions and another, even smaller expansion for a second Vagabond to coincide with their Root: The Vagabond Pack. But that’s beside the point. The point is that the Lizard Cult and Riverfolk Trading Company are both super fun factions to play as, but make sure you really like them before you pick up The Riverfolk Expansion, especially if you already have The Clockwork Expansion.

Despite having my favorite faction, this expansion comes with some outdated features. Great for expanding gameplay, but you have to take the lumps with the cream.