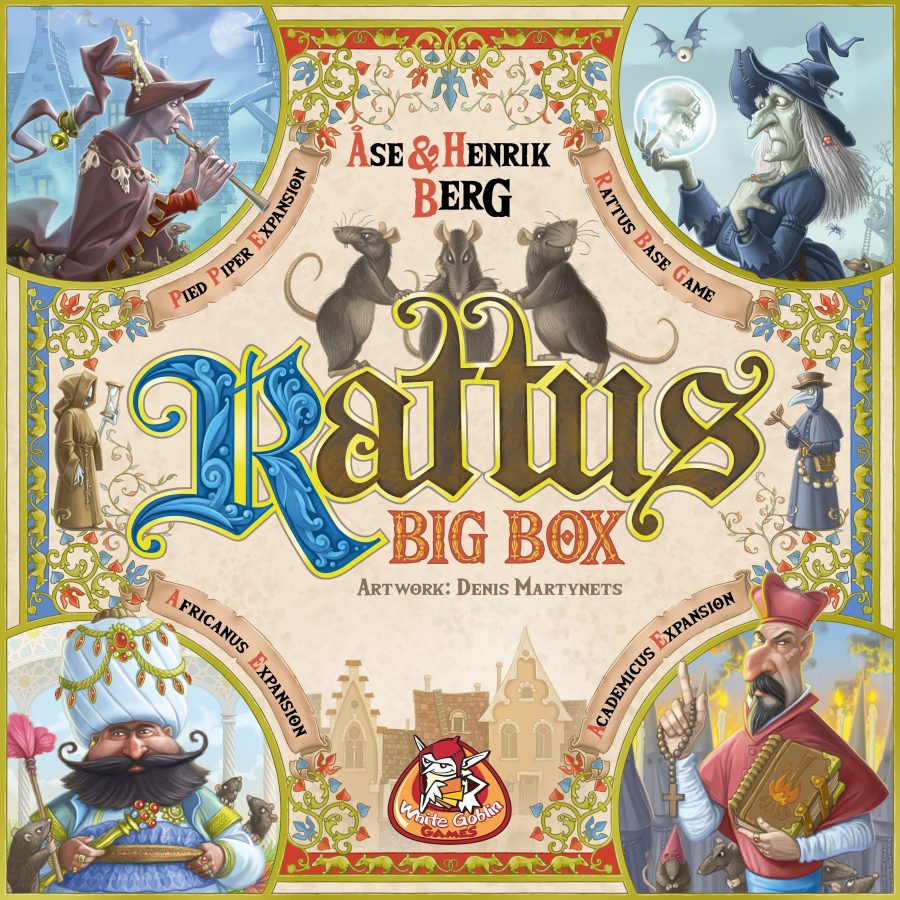 Rattus: Big Box collects most of the content from the 2010 game Rattus into a single package. Inside this new edition is the base game, 3 expansions, and additional promo content. This game is now 13 years old—does it still hold up today?

Rattus is a game about surviving the black plague—surviving it… and spreading it to opponents. In this game, 2-6 players compete to withstand the scourge by strategically placing population markers and managing player abilities.

The game is played on a board showing a map of Europe and North Africa. At the start of the game, rat tokens are placed in the various territories, and players seed the board with population pieces.

The goal of the game is to have the most survivors at the end. Each turn, the active player follows 3 steps:

Class cards are special abilities, and a player may have any number of them. When taking a new class, the player may choose an unclaimed card, or they may take a card from an opponent. Either way, the player keeps the new class until someone else takes it. Having special powers is great, of course, but it comes at a cost—the more powers a player has, the more vulnerable they are to the plague.

When placing new population markers, the player chooses a single territory and places as many markers as there are rat tokens there. Since surviving population is what determines the winner, players typically want to place more markers if possible.

Once a player has placed population and optionally taken a new class card, they move the plague marker. This piece must be moved to a neighboring location, and wherever it lands, it spreads disease. First, it causes up to 2 rat tokens to be added to adjacent spaces, and then it ravages its own region. As long as both population and rats remain in the current plague space, players continue flipping and resolving rat tokens.

The back of each token shows which classes are affected. For each class shown, the player with that class card loses a population from the plague space. Sometimes rat tokens will cause the player with the most population—or even all present players—to lose pieces.

In this way, the more class cards a player has, the more susceptible they are. This game is a balancing act between collecting class powers and maintaining population on the board.

The expansion content includes tons of additional classes and optional gameplay tweaks. It enriches the game by providing great versatility and allowing players to customize their experience.

I have enjoyed Rattus for years, so my delight at a new big box version should come as no surprise. This is a great family-weight game full of grim humor and interaction. It fits into the same space as games like Survive: Escape From Atlantis and The Downfall of Pompeii. It’s not quite as mean as those games, but it has a similar vibe—moving the plague marker into a space full of opponents’ pieces elicits the same kind of amusement as sending a sea monster after an opponent’s boat or dropping an opposing piece into the volcano.

Again, this game is all about balance. Like the best family games, it has a nice mix of strategy and luck. Player decisions certainly matter, but the randomness of the rat tokens inserts just the right amount of chance. Rattus also plays quickly, with games in the 45-minute range, and it’s easy to learn.

While I prefer the look of the original Rattus, the big box has a better overall production quality. Rather than cubes, the population pieces are meeples made to look like male and female profile busts. The board is large and easy to read, and the rules are broken up into 2 books, the first for the base game and the second for the expansions. There are over 30 classes in the game, providing tons of combinations.

This big box is certainly the definitive version of Rattus, and it’s a great jumping-on point for anyone interested in the game. I have always felt that Rattus was underrated, so I’m happy to see it getting a shiny new edition. If you haven’t played this game before, it’s definitely worth checking out.

I have enjoyed Rattus for years, and this Big Box is the definitive version. It's a great jumping-on point for new players, and I highly recommend it.