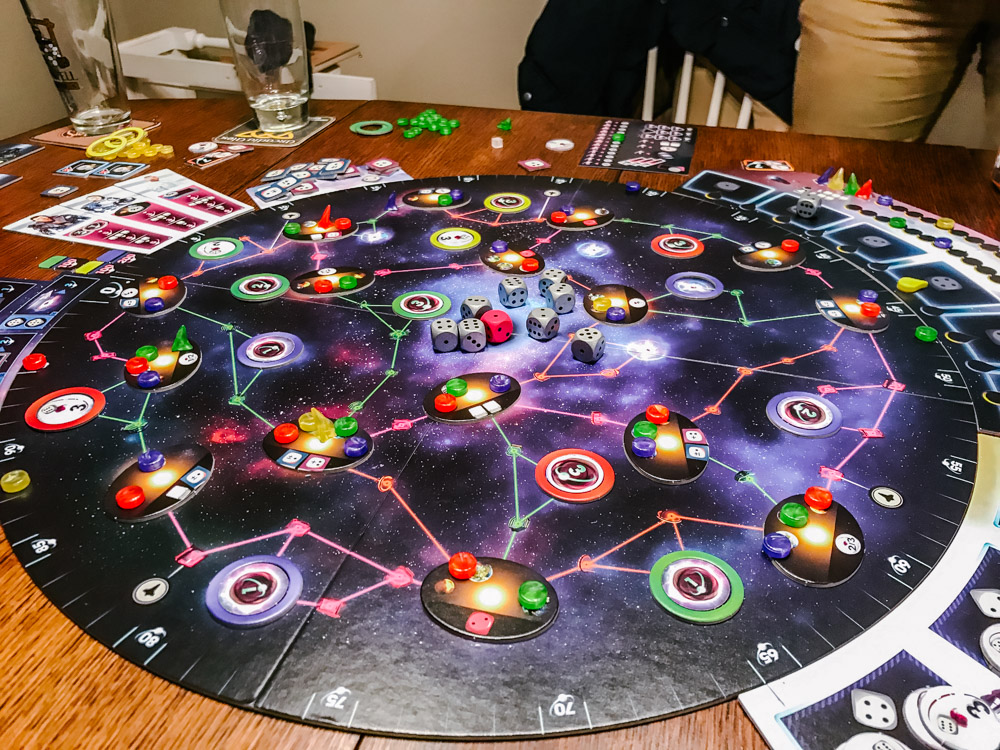 Pulsar 2849 is a space exploration game, thematically illustrated by dice rolling and mitigation.

Pulsar is designed by co-founder of Czech Games Edition (CGE) Valdimír Suchy, who has long designed titles for the company. Suchy has also designed CGE titles such as: Shipyard, 20th Century, Last Will, The Prodigals Club, and many more.

CGE is a games publisher first established in 2006. CGE is responsible for a long list of excellent board games. Some of these include Through the Ages: A New Story of Civilization, Codenames, Tzolkin: The Mayan Calendar, Galaxy Trucker, Alchemists, Adrenaline, and many more.

Last year, I came to grips with my space addiction. I failed to dominate the galaxy in Stellaris, jumped to light-speed many times with Elite: Dangerous (and bought a joystick for it. I’m crazy, I know.), played the heck out of Star Cartel and Farlight, and dreamed of the day I could purchase and explore with Star Trek: Ascendancy or Twilight Imperium 4. I’m stuck in an unsolvable conundrum thinking about our petite pinprick of a solar system in the face of the potential in space, coupled with dream-states of future technology allowing light-years of travel in just a few days or hours.

With Pulsar 2849, distant flickering stars come close to home and rest on your tabletop.

Intricately illustrated, Pulsar 2849 displays a far-off galaxy and beckons players to claim and establish their own pulsars. By traveling via warp gates, players will build and complete gyrodynes, which package and transport nearly infinite energy sources from pulsar stars, to local human solar systems. It’s a corporate energy arms race, as each player must guarantee a stronger hold on the energy industry to appease goals, complete transmitters, and climb the technology tree. Players also complete projects in their own headquarters which grant bonuses and special travel across the stars. Exploration is also key to success, as players who can visit unknown planetary systems will establish outposts and gain a multitude of renown at the end of the game.

Gyrodynes and galactic exploration are critical to success.

Whoever can best progress into technology patents, efficiently construct gyrodynes and transmitters, and explore the galaxy will be winner of Pulsar 2849.

Pulsar evokes all the unknown thrills of remote imagined regions of deep space while balancing beautifully-crafted game design. Each board is covered in slots for player tokens and the required die values to take the adjacent actions. Absolutely intimidating at first, Pulsar becomes a familiar friend after the first play.

Each round begins by rolling nine dice and positioning each value into the corresponding area. From here, players determine the median of all values rolled, then adjust the marker up or down one depending on how many dice reside on each side of the marker.

This matters, because now players will snake draft two dice each. Players anguish over the proper dice to take because these become the sole actions made available for the round. Not only are these dice monumental for action selection, but depending on how close or far the chosen die is from the marker, the player must also move his turn order tracker or engineering tracker up or down. This presents an always interesting meta-game before each round. Maintaining first in turn order is sometimes critical, but neglecting the engineering track means the loss of points throughout the game, and likely the loss of huge end game points.

What makes this part of the game compelling is choosy dice selection is never isolated to the needs of a single player. In fact, all players will need dice of all values to complete their goals. Taking a higher die typically results in moving backward on one of those tracks, where taking a lower value die means inching forward. Players can and should plan their turns during this phase, but regardless, each time dice are chosen, players agonize over their options and decide their fates.

At least, to some extent.

The design of Pulsar 2849 reminisces on a classic dice and action selection game I love very much: The Castles of Burgundy. This design reflection means no die is ever worthless. Even in the most unfortunate of circumstances, Castles of Burgundy always provides players an option, even if it’s not the best one. In Pulsar, though different values of die, there is always a purpose. Higher valued dice are great for space travel and larger pulsars, but lower valued dice can allow for more accurate space destinations and have plenty of uses in-game. Of course, if a player can’t find a use for his die, he can probably turn it in for a chit that will let him mitigate his dice results.

It’s fair. This tech track couldn’t be less overwhelming if it tried.

Up front, new players will feel completely lost at the massive undertaking of iconography before them. Some helpful design choices are the technology tree being gradually unlocked as rounds progress, and following the rulebook recommendation to exclude personal HQ boards for the first game. These help players to minimize their options and focus only on what’s before them. Strategically, I recommend taking the time to explore space, pick up bonuses, and claim some early pulsars. As players ease into the basics of space travel, they should consider technologies and getting a gyrodyne established.

In some ways, playing Pulsar feels like reading the rulebook for Galaxy Trucker. I remember every page of rules alluded to needing as many ship parts as possible of each type. In Pulsar, players must progress in every area possible to maximize points. Success is determined by being able to do everything well, though on the occasion, it’s possible to neglect an area or two and squeak a victory out. It’s point salad, a la my lovable aforementioned Feld title, but interstellar energy conquest is arguably more exciting than establishing villas and cattle in the hills of Europe.

Goals keep players focused on an end goal, but don’t offer as much replayability as I’d initially hoped.

Pulsar initially felt like the sort of game that would end up infinitely replayable. Most boards and tiles have a flip side, offering different goals, technologies, and arrangement of galaxy. After playing it quite a bit, I’ve instead decided Pulsar offers tons of variability. This might not translate to feeling fresh each game, but it does mean no two games will be totally identical. Players can increase the amount of planets needed to visit to satisfy one goal tile, while the backside of the galaxy map features dead-ends and different paths to systems. Later games introduce the HQ, where players can either enhance their actions and supplies, or venture out onto specialized gate runs that pay big points for visiting identically-colored gates. I didn’t find many uses for gate runs personally, but others found them powerful but situational. Regardless, it’s yet another feature that makes Pulsar varied and challenging.

Players can access a third bonus action each round, but this must be attained, either by spending engineering cubes, patenting temporary technology, or completing two linked transmitters. This is one of the most critical aspects of Pulsar‘s design. Without bonus actions, a player is limited to 16 actions over the course of the game. One would be surprised with how much can be accomplished with only these 16, but to extend to an additional 6-8 actions in a game would likely put him over the top as victor. Like most games with an additional action bent (Agricola, Lords of Waterdeep, etc.) the chance at more turns can tip the scale against players who have been first to punch on board actions. This is why taking a die mitigation chit is such a worthless action, but becomes somewhat helpful in the midst of remaining options that are no longer viable.

Pulsar will stay on my shelf until I play it or move. It feels like an excellent successor to Castles of Burgundy. With so many options available and so many routes to victory, exploring space feels fresh every time. The constant rush of evaluating die values, coupled with making each action matter is brilliant. Pulsar is always a welcome game at my table. This is indeed the best I’ve played so far in 2018.

As many in my game group will tell you, I typically reserve my opinion on a game until 2-3 games in, or after I’ve had time to think about it for awhile. After our first game of Pulsar, however, I fell in love. This is one of the greatest games I’ve played in my few years in the hobby. It’s relatively inexpensive, beautifully designed, and has great iconography. Sure, it’s tough up front, but once you’ve learned the system, it’s magnificent and allows all sorts of routes to enjoy it.

A review copy of Pulsar 2849 was provided by CGE.