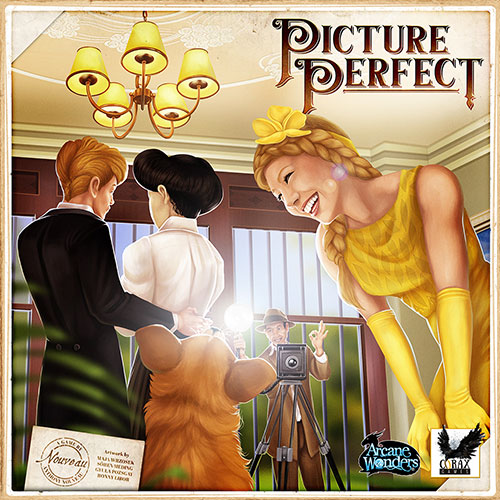 Picture Perfect is a logic game about trying to take a photograph of a group of party guests. Each guest has specific desires for how they want the photo to look or how they want to be positioned in it, and it’s up to the players to try to make everyone happy with the final product. Ready? Say “cheese!”

Logic and puzzle-style games tend to be among my favorites in the tabletop scene. As a huge fan of games like Dimension and Pelican Cove, I was immediately drawn to Picture Perfect, since it is the same vein as those games. Though not a real-time exercise, it has a similar vibe of “Here are a bunch of requirements/restrictions—now build a tableau that satisfies them.”

In Picture Perfect, each player tries to position a set of character standees around a table so that all of the characters’ wishes are fulfilled. The placement of standees is done in secret; each player has their own tableau, which is concealed behind a screen.

To set up the game, players shuffle a deck of desire cards and distribute them among envelopes corresponding to the standee characters. Collectively, these cards determine how/where each character wants to be positioned in the photo. Desires include things like:

And so on. Every character has a set of desire cards that may or may not work well together. At the start of the game, players each receive a number of character envelopes, so they all begin with some knowledge.

The game lasts 6 rounds. To play a round, players examine the cards in the envelopes they hold. Behind their screens, then, they can place and move their standees freely. Once everyone is done with this, an exchange card is drawn, which decides how character envelopes will be passed. There are several different methods of passing/trading, but in essence, envelopes move each round, which means players continue to gain more information throughout the game. Each player also possesses a VIP card. At any time, a player may insert their VIP card into a character’s envelope, thereby multiplying the points earned from fulfilling that character’s wishes.

At the end of the final round, players have a last chance to position the characters on their board. (They can even omit characters from the scene if desired.) Then, using their phone camera, they take a photo of their tableau such that all present characters are included. Then, they calculate their scores based on how well the guests’ desires have been met. The player with the most points wins!

Picture Perfect is totally my kind of game, so bear in mind that predisposition. Unsurprisingly, though, I really do enjoy this one. It fits into the same category as games like Dimension, despite not being real-time. It also incorporates a memory element not found in many games of the genre. (Though this could be a positive or a negative depending upon your personal taste.)

The passing of envelopes and hidden information forces players to come up with their own ways of remembering things, much like Hanabi. I might put a pair of characters off to the side, for example, to remind myself that they want to be placed together. Likewise, if I know a character wants to be in the back row, I might lay them down there to remind myself not to move them elsewhere. Part of the fun is trying to keep track of everything!

Ironically, the one thing I don’t care for in Picture Perfect is the picture itself. While taking an actual photo is unique and highly thematic, it has the potential to be very “wishy-washy.” Some of the characters’ goals are strict and clear (e.g. “Is the character is standing next to a woman?” is a simple yes-or-no question), but other criteria are open to edge cases and interpretation. For instance, if a character’s face is to be obscured in the picture, how much of it has to be covered for it to count? All of it? Half of it? What if a sliver of their face is showing? Can a standee be turned slightly to make them more/less visible?

On top of this, it can really matter how and from what angle the photo is taken. There are some rules that guide this step, but players have a lot of latitude to position their phone juuust how they want it to get the optimal shot. Again, I appreciate the thematic integration here, but the whole photo phase can feel frustratingly inexact.

Still, the overall puzzle of Picture Perfect really appeals to me, and that’s what matters. Even though I don’t care for the game’s finale, I like everything leading up to it. (And I’m sure many folks will feel differently about the photo phase!) As such, I do recommend Picture Perfect, especially to fans of puzzle games. If you’re looking for a new take on a classic genre, give this one a try.

Despite a finale that can feel a bit inexact and "wishy-washy," Picture Perfect is a fun puzzle game with great thematic integration.