Don't shoot the messenger; he's not an actor. 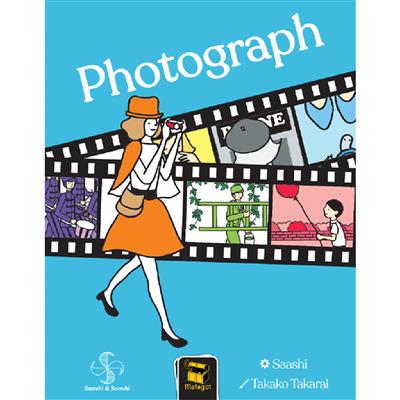 A re-release of 2016’s Wind the Film!, Photograph seeks to give players an accessible card game in a similar vein as Rummy with more strategy, more colors, and more pictures. Set in 1960s Japan, players will compete to see who can create the best shots!

In Photograph, players compete to have the most points at the end of the game. Players get points by having cards of the same color in runs. The more cards in the color, the more points. Players also get bonus points via the Good Shot! cards, which they can earn by being the first player with a specified number of cards in a color.

Everyone starts with 5 cards. It’s very important that you don’t rearrange your cards in your hand (think Bohnanza). On your turn, you’ll choose 1-3 cards from the available shots organized in a grid. You have to start from the outside of a row and take cards going inwards. You’ll place the cards in the front of your hand, 1 by 1. Then, you’ll “wind the film,” which means you’ll move a card in your hand towards the front. Lastly, you’ll play from the back of your hand however many cards you chose to draw initially.

In order to play a card, the card needs to be 1-3 digits away from the card you’re playing on. For instance, if you have a red 3 and you want to play a red 6, you could. However, if you wanted to play a red 11 after the red 6, you wouldn’t be able to. Instead, you’d have to play that red card upside-down, and it would be worth -2 points at the end of the game. Moreover, once you pick a direction (ascending or descending), you can’t go back. So if you put a blue 2 down on your blue 3, you better not plan on playing any more blues unless you get a blue 1.

When you’re drawing cards, you must choose carefully so you don’t pick up a bunch of cards you can’t play. To make matters more interesting, the cards on the outside columns of the draw grid are face-up, but the cards on the inside columns are face-down. The back of each card tells you what color it is and if it’s number is between 1-6 or 7-12. This is a strong move by designer Saashi because it adds an element of randomness without making it a complete luck fest. Having to play the same number of cards that you draw also adds a push-your-luck element to Photograph. Going for 3 cards every time means you’ll have more cards than your opponents, but you’ll also get stuck with cards you don’t want.

That’s it. That’s how you play. As my wife put it, “the gameplay is simple, but the strategy is tricky” (and she would know because she won every 2-player game we played). Figuring out how to arrange your hand can be quite difficult, but it’s a fun puzzle that’s worth tackling. Things get much more tricky about ¾ of the way through the game when the Sunset card appears, which forces players down to 3 cards in their hands, but it’s usually still manageable. Often, the bigger problem is keeping the future open by not playing a green 10 on your green 9. If you do this, you’ll be locked into an ascending pattern for your greens, and you won’t be able to play any more greens unless it’s an 11 or 12, significantly narrowing your options.

The pictures are fun, and you can envision the movie you’re creating. I like the compact box, and the cards are of good stock. The included player aid cards are wonderful because they make a simple game even simpler to teach. I do wish Matagot would have included scorepads to make scoring easier, but they’re not a must-have.

If you’re looking for a soft step up from games like Phase 10 or Rummy, Photograph would be a great place to start. It’s strategic and puzzley without being convoluted, and it plays great as a 2, 3, or 4 player game.

A fun little card game with a surprising amount of strategic puzzling.