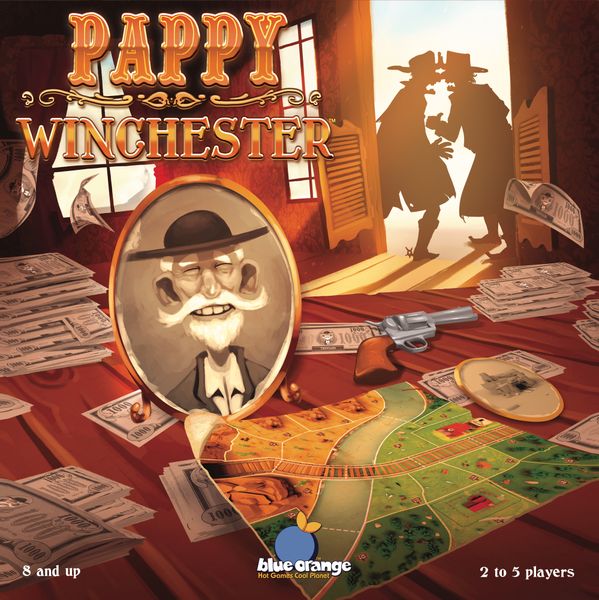 Pappy Winchester is a sort of introductory-level auction game from Blue Orange. With great-looking components and a simple ruleset, it is a good game for younger players.

The theme of this game involves greed, as players try to get the biggest share of an inheritance. Periodically, players can also “duel” each other by playing cards with guns on them. These themes are presented quite harmlessly, though, so it still feels very family-friendly.

The rich old Pappy Winchester has finally kicked the bucket, and now it’s up to his heirs to split his fortune. In this game, players auction off 19 plots of land as they try to complete objectives and get the biggest share of Pappy’s wealth.

At the start of the game, the board is seeded with tokens in each space. A few spaces receive cards which may contain extra loot, and a 3D ship and train piece are placed on the river and railroad. Each player receives $8,000, as well as 2 secret objective cards. 5 stacks of money are placed off to the side, with a public objective card on top of each stack.

To begin a turn, the active player chooses a random, face-down token to determine which space is to be auctioned off.

If the “4” token were revealed, for instance, players would bid to take possession of space #4. (As it happens, this is one of the spaces that contains a card, so it may reward extra money to whomever wins it.)

The auction works in the usual manner: players take turns bidding until only 1 remains. An interesting twist in this game, though, is that the winning bid is divided evenly among the other players, rather than being paid to the bank. This means that in a 3-player game, if a player wins an auction for $4,000, he must give $2,000 to each of his opponents as payment. (This system is very similar to Reiner Knizia’s Dream Factory.) If the money cannot be distributed evenly, any remainder goes to the saloon.

Additionally, each player begins the game with a dueling token. If exactly 2 players remain in an auction, either player may spend their token to challenge the other person to a duel. To resolve this, the players take 2 cards – a “Click” and a “Bang” – and mix them up. Each player receives one, and the cards are revealed. The person who won the duel pays an amount equal to the highest bid and the auction ends.

When a player claims a space, he places one of his tokens on it to mark ownership. He receives the space’s bonus token and card (if applicable). Bonus tokens allow players to peek at a card anywhere, to move the boat or train, or to take all the money from the saloon.

Whenever the boat or train are moved, any player with a plot of land adjacent to the activated vehicle earns $1,000 for each such space. If a player fulfills the conditions of any of the public objective cards, he receives the associated money. At the end of the game, private objectives can earn players additionally cash, as well.

After all the spaces have been auctioned, the player with the most money wins!

In my experience, games from Blue Orange usually fall into 1 of 2 categories:

Pappy Winchester feels like it belongs somewhere in the middle. It does not have the usual dexterity madness of the former category, but it also did not engage my group strategically as much as those in the latter. To be fair, auction games are generally not our thing, but this one did fall a bit flat for us.

However, in our discussion about the play experience, we all seemed to agree that it would be a great tool for introducing younger gamers to the auction genre. It offers opportunities for clever tactics, and the dueling mechanism really is hilarious.

The game’s production is nice, particularly the 3D vehicles and vibrant, stylized board art. The rules are clear and concise, and the box holds everything well.

My overall recommendation for this game will largely depend upon the audience. As an introduction to auction games, particularly for kids in, say, the 8-10 range, Pappy Winchester is a good choice. For adult game groups, I would say try before you buy.