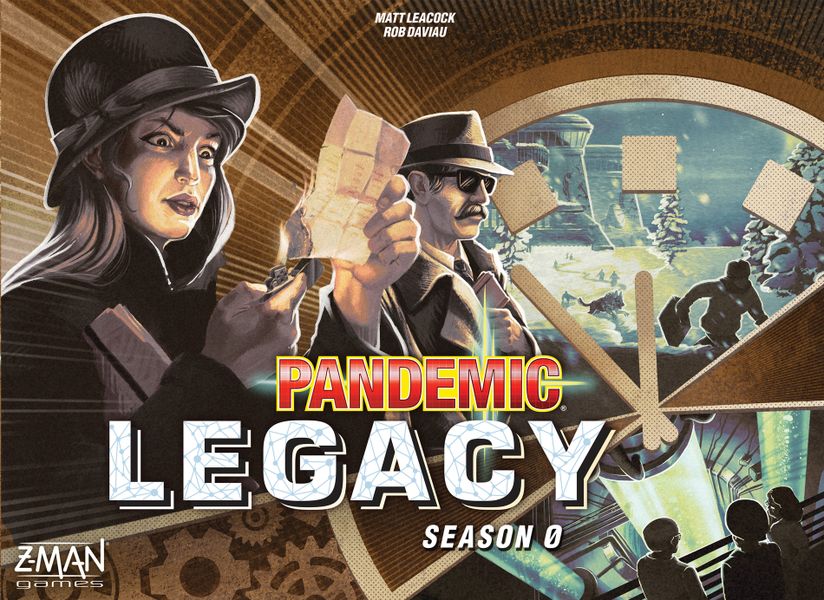 The original Pandemic debuted in 2008, and tasked players with curing 4 deadly diseases simultaneously from the board. Pandemic Legacy: Season 1 and Season 2 came out in 2015 and 2017 and made the game even harder by causing the bad things than happened to persist from one game to the next. Thankfully they also provided customization options for the players to help draw them in. To be honest, I was originally skeptical about a legacy Pandemic game, because the original was hard enough! But I was wrong – Pandemic Legacy games are a lot of fun, if you can handle the multiple objectives and brain-burning options each round has to offer. Pandemic Legacy: Season 0 is not only a prequel where you’re trying to save the world – it’s also a spy game.

Players will do everything they can to stop events in motion that, should they fail to rise to the occasion, will result in deaths, the spread of a deadly virus, and collateral damage. Do a good job so your friends don’t impeach you from the game table.

One might be asking why anyone would want to play a game about stopping the spread of a deadly disease in 2020. Well, at least for me, a big part of it is you get to be spies! But before I go any further I want to explain: because this is a legacy game, and I don’t want any of it to be spoiled for someone, I’ll mostly stick to game mechanics and overall gameplay critiques. Anything you’ll read here would be something you can glean from either looking at pictures of the game or some small concepts that are introduced the first time you set up a game. I won’t spoil any story other than what you can read on the back of the box.

The year is 1962, and the CIA has recruited you to look into the Soviet’s new weapon. You and your colleagues will travel the globe, neutralize enemy agents, construct safehouses, assemble teams, and acquire targets known and unknown. Players familiar with Pandemic or Pandemic Legacy games will be familiar with many of the game’s core rules and practices, however this game has several new tricks. In fact, there are dozens of new rules and concepts to prospectively add to the rulebook, but luckily they’re introduced slowly. Usually players will only have to learn one new thing each game.

My favorite new thing was creating an alias. After the introductory prologue game, players are encouraged to take one of the four passports from the box and construct an alter ego. I’ve included a picture from the publisher in Italian (below), to minimize spoilers. Players will have a choice of different abilities, clothes, facial hair, glasses, and hats. After a successful game players will have the opportunity to spend a budget and possibly add new assets or abilities to an alias. However, also new to the game is surveillance. If you start your turn in a city with any surveillance icons (the red eye), you lose cover equal to the number of icons in the city (up to three). At different points various negative effects take place. Lose enough cover and you may have to discard a card, take a liability, or if you take too much you may even get burned and have to not use that alias again – ever. I will say that the act of scratching off the cover doesn’t always go perfectly, and the first time I scratched off a cover circle I accidentally scratched down to the paper.

Another big new addition are teams, represented by small white vans with the three affiliations on top – Allied, Neutral, and Soviet. Players can discard 5 city cards matching the affiliation of their city while at a safehouse to assemble a team. Teams are needed to complete objectives, clear the board of enemy agents quickly, and to tackle problems in ways that the players cannot via direct interactions. Teams can only be active in cities that match their affiliations, i.e. a Soviet team in New York (an Allied city) can’t do anything.

So much like other Pandemic games, you move around the board with 4 actions, trying to do as much as you can. You get two player cards, then flip over 2-4 threat cards based on how far along the threat token is. The big difference in Season 0 is you’ll be clearing the board of little red Soviet agents instead of four different disease cubes, at least in your first few games. The difficulty starts out low but continues to ratchet up every game. And like past seasons of Pandemic Legacy, when you win a game your funding for the next month is one less, to a minimum of 1. This funding determines how many helpful event cards you can shuffle into the player deck.

What’s great about this Pandemic is that little decisions you make early in the game can come back around later in the game thanks to the Personnel File and Intelligence File. I won’t go into detail but as you play you’ll be adding more cards, occasionally taking them out or referencing them when the game directs you to. Between this mechanic, the ever-changing game board that you’ll be adding stickers to, and your personalized passports, this might be my favorite version of Pandemic yet.

So what are the downsides? Well, obviously, setup and teardown can take a little while – don’t break the plastic and expect to be playing in a matter of minutes. And at the end of each game you have to do some maintenance and refer to the legacy deck. Also, if you’re not great with games that make you balance multiple objectives simultaneously, consider that Pandemic Legacy: Season 0 asks you to do a lot in a small amount of time, with multiple failure parameters. In fact, halfway through the “year” (each successful session is a new month) your objectives bump from just two to three. Some objectives even task you with going to multiple cities at the same time, and it’s up to you and your fellow spies to decide to make it to some or all of them.

Pandemic Legacy: Season 0 is a prequel that manages to do what I’ve never seen another prequel do: outmatch the original. Yes, it’s harder. But it gives you a second chance at each month just like past Pandemic Legacy games, and it gives you more funding when you fail. This game will appeal to both newcomers and veteran Pandemic players alike. Just don’t go around ordering fancy martinis and you’ll do fine.

Pandemic Legacy: Season 0 is a prequel that manages to do what I’ve never seen another prequel do: outmatch the original. This game will appeal to both newcomers and veteran Pandemic players alike.