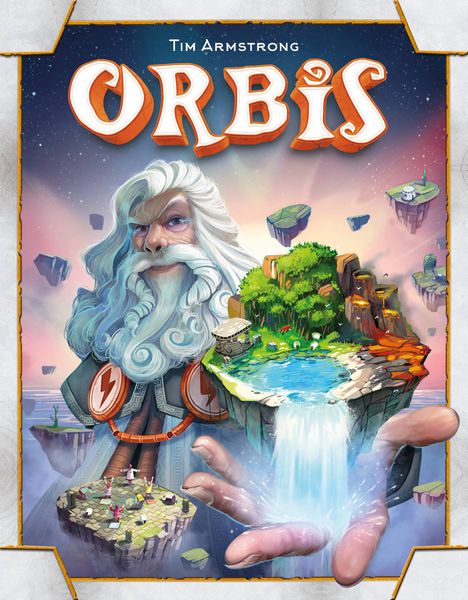 Orbis feels sort of like a cousin to the blockbuster hit Splendor. Less focused on engine building and more focused on drafting and tile placement, it wraps up a nice depth of strategy within a simple rules set.

Though it is quite abstracted, the theme of Orbis involves a pantheon of deities. The game’s economy is centered around “worshippers,” which players use to expand their tableaus. At its core, this mechanic amounts to little more than spending wooden cubes to purchase colored tiles, so I don’t see much cause for concern, but it’s something to be aware of. If Santorini doesn’t raise any red flags, Orbis shouldn’t either.

In the wake of Splendor, Black Fleet, and T.I.M.E Stories, Space Cowboys has set the bar very high for themselves. They have an excellent track record, so my expectations for their products are steep.

Their latest game, Orbis, puts players in the roles of gods creating universes (you know, the usual). In this tile-drafting game, players build a display of hex tiles, gaining and spending worshippers (i.e. wooden cubes) along the way to carefully craft their tableaus and score the most points.

To set up the game, the hex tiles are divided into stacks of levels 1, 2, and 3, according to the number of stars printed on them.

From the first stack, nine hexes are placed to form a central “market” display. As players gain tiles from the market, they are replaced from the lowest-level tile stack remaining, meaning that all the level-1 tiles will come out before any level-2 tiles, etc.

The top of each hex lists its cost, and the left side lists its game effect and point value, if any. Level-1 tiles tend to be less expensive, and prices generally increase in levels 2 and 3. Below is a closer look at a tile from each tier:

On a player’s turn, she begins by acquiring a tile from the market. Whatever the color of the tile is, all adjacent tiles receive a worshipper cube of that color. As an example:

Since a yellow tile is being taken, a yellow cube is placed on all three adjacent tiles. (Note that the majority of these level-1 of tiles have no purchase cost.)

If the selected tile contains any cubes, she immediately gains them (cubes are basically the game’s money). Then, if the player is able to, she may purchase the tile she selected for its indicated cost. If she cannot, or does not wish to, she must instead flip the tile over to its “Wilderness” side, which will subtract a point from her score at game end. Losing a point is obviously inefficient, but there can be a strategic reason to do this, as I’ll explain in a moment.

Either way, the player must then add the tile to her universe tableau. Each universe must be a 5-4-3-2-1 pyramid, an example of which is illustrated below:

The first row of tiles has essentially no placement restrictions. Once a player is ready to start working on the higher rows, however, each newly-placed tile must be on top of a like-color tile—basically, red has to be built above red, blue has to be built above blue, etc. This means that as the tableaus build higher and the color restrictions become more pronounced, the decisions become tighter. Herein lies the double-edged sword of using a Wilderness tile: it costs a point, but the tile is wild (no pun intended), so any color may be built on top of it. Basically, it reduces the player’s overall score, but drastically opens up her options.

Tiles also have game effects. Some of them are as simple as, “Take an extra worshipper cube,” while others grant a Splendor-style color discount on future purchases, and others offer end-game scoring if certain conditions are met.

Additionally, once per game, each player must take a “god tile” in place of a normal market tile. The god tiles have a variety of different effects, and they are a useful way to spend a turn if none of the central tiles are desirable. When players have completed all but the topmost spot on their pyramid tableaus, their chosen god tile completes the formation (see above).

This ends the game. Scores are then tallied, and the player with the highest score wins.

Orbis has some very interesting ideas. I really love the way worshippers appear on market tiles. This cube-placing system creates a clever puzzle that makes players think carefully about every purchase—both what they are getting and what they might be giving to opponents. Similarly, the spatial aspect of constructing universes is cool – the closer the game gets to the end, the more significant, yet constricted, the decisions become. I have played a lot of games that get more open-ended as they go, but this one flips that notion on its head.

The first time I played Orbis, one of the players said, “Wow, there is a lot more to think about than I originally expected.” I totally agree with this sentiment. Gamers always want more depth and less complexity, and this game really delivers that. Though I think I like Splendor slightly more than Orbis, I’ll be the first to admit that Orbis has the greater depth of strategy. Happily, this depth does not come at the cost of long, drawn-out gameplay—its playtime remains very manageable at somewhere in the half-hour range.

The components are functional, though not quite as good as other Space Cowboys games (I think Black Fleet‘s production quality spoiled me). That said, the well-written rulebook and intuitive iconography mean players should understand everything quickly and be playing in no time. Overall, the game looks nice, but its components won’t drop any jaws.

Orbis scales well between different player counts. It’s interesting that more players mean more worshipper cubes in the market, which in turn means more tantalizing tile choices. It works well as a two-player game, but for this reason, I like it even better with three or four. This game is a solid entry in the “gateway-plus” category. It has more rules than, say, Ticket to Ride, but newcomers to the hobby should still be able to understand and enjoy it. Experienced gamers will enjoy its optimization puzzle, and it demands repeated plays to explore its nuances. Overall, Orbis is a solid game and I recommend giving it a try.