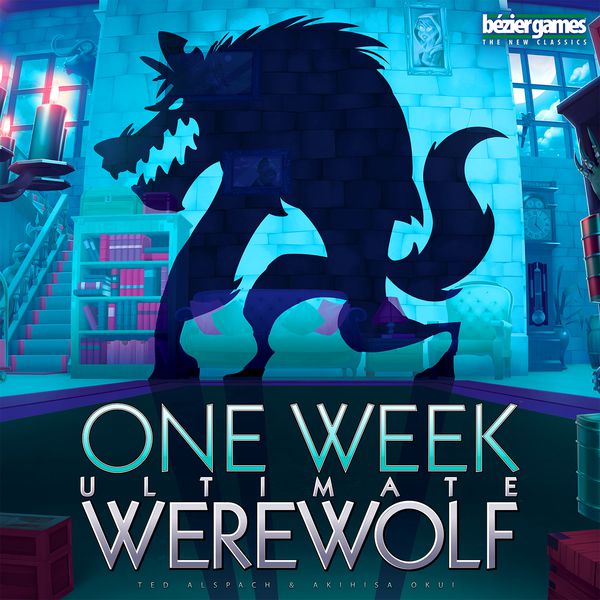 One Week Ultimate Werewolf is a reimagining of the modern-classic social deduction game One Night Ultimate Werewolf. Played out on a tableau over the course of five days and nights, the game adds a new twist to an established series.

I love the One Night Ultimate series. It contains some of the most laugh-out-loud-fun games in existence, and I play them frequently.

So obviously, One WEEK Ultimate Werewolf was a no-brainer for me.

One Week Ultimate Werewolf (OWUW) is the first “full-size” board game in the series, and it includes much more than just a stack of role cards. The game takes place in Ludwig Castle, a location popularized by another title from Bézier Games, and lasts over the course of four or five nights, depending upon the number of players. (I suppose “Four or Five Night Ultimate Werewolf” just didn’t sound as punchy.)

[Since I have written about ONU games in the past, I’m working on the assumption that the reader is familiar with the series’ core game system. If not, then I recommend checking out some overview videos on YouTube or BGG!]

The board consists of a Foyer tile and a number of room tiles equal to the number of players.

Each person receives a player marker in their color, along with a secret identity. The game also includes three “staff” markers, essentially non-player characters who have hidden identities of their own.

Unlike the original ONU games, which have many roles to mix and match, all characters in OWUW will be one of three roles: Villager, Werewolf, or Tanner. (This was a shrewd design choice—with the introduction of new game mechanisms, having too many roles could have really over-complicated things.)

The player markers are crafted to hold a role token, so as folks move around the board, their roles go with them, physically situated on their marker.

The turn structure consists of a Day and a Night phase. During the Day, the staff markers each move one space. The starting player has a large, wooden arrow piece that indicates the direction of staff movement, as well as turn order.

After staff markers have moved, player markers can do the same. All players have a hand of cards, from which they select one to play face-up to their tableau. Per the “Day” action on the chosen card, their marker will move up to three spaces.

If a player ends their movement on a room with a sun icon, they may take the room’s action. Some examples of room actions include:

When everyone has completed their Day actions, the Night phase begins. In standard ONU fashion, all players close their eyes and then take turns opening them and executing an action. Since this game does not have app narration, players should verbally announce when they begin and end their action, as well as which action they are taking (lying is encouraged, obviously).

To take a Night action, players once again play a card from their hand, this time face-down. The four available actions are:

As the game progresses, players can use special “role tracking tokens” to record information and suspicions. Given that play lasts four or five rounds, they will likely find this to be critical to success.

When the last Night has been completed, players vote on who they believe to be a Werewolf. Just like other ONU games, everyone simultaneously points at another player, and the person with the most fingers pointing at them is killed. If the Tanner has the most votes, he wins. Otherwise, the Villagers win if at least one Werewolf dies, and the Werewolves win if they all all survive.

As much as I love the ONU series, I know that not everyone feels the same way about it. I enjoy OWUW, but my recommendation for it depends in part on one’s opinion of the original games, and why they like or dislike them.

OWUW feels slightly more “gamer-y” than its predecessors, with multi-use cards, room actions, and a board geography. The deductive elements are more pronounced, simply because there is more information to keep track of. As such, I think this game will appeal to people who thought ONU was okay, but felt that it lacked substance. For them, the elevated gameplay of OWUW might be just what they are looking for. Players like myself who crave games with lots of bluffing and treachery will get their fix.

That said, I can also see this being a miss for some ONU fans. Someone who loves the earlier games for their lightning-fast simplicity might feel that the introduction of new mechanisms weighs things down. Basically, if you like ONU for its metagame, you will probably enjoy OWUW as well; it expands on it and offers new possibilities for bluffing. However, if like it for its spitfire pace, it may be better to stick to the basics.

This game looks great, with detailed room designs, high-quality pieces, and that classic ONU artwork I’ve come to love so much. Visually, OWUW fits right into the series. Though unnecessary, the thematic tie-in to King Ludwig’s castle is a nice self-referential Easter egg, as well. Production-wise, everything looks and feels nice. The only potential issue is that the role tracking tokens are quite small—it would have been nice it they had been the same size as the role tokens themselves. (Of course, this would have necessitated more punchboards and made the game cost more, but I digress.)

Overall, there is much to like about OWUW. The gameplay is fun for mostly the same reasons as the original: lots of finger-pointing, deception, and general silliness. With that in mind, however, I strongly recommend that all players be familiar with the ONU series before diving into this one; a baseline knowledge of the earlier games will help OWUW go smoothly.

All told, this one gets a thumbs-up from me, but it’s worth examining why you like/dislike the original before jumping into it.

A review copy was provided by Bézier Games.