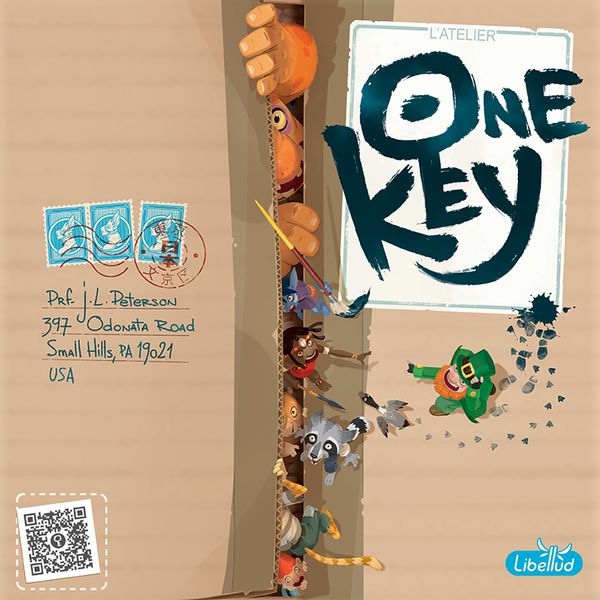 One Key is a cooperative game in which one player secretly chooses a card to be the “key,” and the other players try to guess which card it is. The clue-giver gives everyone hints in the form of abstract images to try to lead them to the correct answer.

One Key feels very similar to the popular Mysterium—a game I really enjoy. In One Key, everyone is on a team, and a single player is chosen to give clues to the rest of the players.

To set up the game, the clue-giver deals 11 cards, face-up—interestingly, every card in this game has a unique shape.

The clue-giver secretly chooses one of these cards to be “the key,” and records its number in the assistive smartphone app.

To win the game, the other players must guess which card is the key by eliminating all the other cards.

The game lasts 4 rounds, each providing new information. In the first round, the clue-giver draws the top card of the deck and places it on the green, yellow, or red tile, to indicate the relative strength of the clue. Green means the clue is strong, yellow means it’s so-so, and red means it’s weak.

Using this information, the other players choose a card on the table to remove. As long as they don’t remove the key, play continues.

In each of the later rounds, the clue-giver draws the top 3 cards of the deck and inserts them into the slots behind the screen.

The clue-giver then pairs each card with a corresponding, face-down token, either green, yellow, or red. The screen is then turned around, and the guessing players can look at a single token. For example:

Here, the players looked at the left card’s token. Since it is red, they can assume it is a bad clue.

When a token gets revealed, the guessing players take its card and adds it to the appropriate tile. This allows them to keep track of all the clues they have received in a single, common tableau.

Every successive round, players must remove 1 more card than the round before (e.g. 1 card in the first round, 2 in the second, 3 in the third, etc.).

At the end of the fourth round, there will be 1 card remaining. If this last card is the key, all players win! However, if the key is ever discarded, the game ends and players lose.

For my opinion of One Key, I’ll start with what I enjoy about it.

In clue-giving games like Mysterium or Deception: Murder in Hong Kong, players can assume that the clue-giver will never intentionally give a bad/misleading clue. Of course, sometimes they have limited options and therefore have to give less-than-helpful information, but it can be expected that they will always give the best clues they can, based on what they have to work with.

One Key turns this idea on its head. In this game, the clue-giver does not get to choose what information to provide, but does get to say whether it’s good or not.  For the guessing players, it can be just as helpful to know which clues are bad as it is to know which are good. This is an interesting aspect of play, and something I have not seen elsewhere.

However, this game has some issues.

First, there seems to be no reason for the cards to be uniquely-shaped. It would have been much more functional (and almost certainly cheaper) for them to all be uniform; as it is, they are basically impossible to shuffle. Additionally, because of their irregular design, a number of them came bent from being banged around in transit.

On top of this, the rulebook is poorly organized. One Key is a super simple game, but the rules are a challenge to get through, because of the order in which concepts are presented. It’s also odd that the clue-giver plays the first round differently than the rest. I’m not sure this was necessary, and it is quite fiddly.

Last, and most importantly, this game just doesn’t feel very innovative. As I said, I like the twist that it puts on traditional clue-giving, but besides that, it feels stale, as if I had already played it many times before.

One Key is a pretty forgettable game, and its experience leaves a lot to be desired. If you like this style of game, I recommend playing Libellud’s other game, Mysterium, instead.