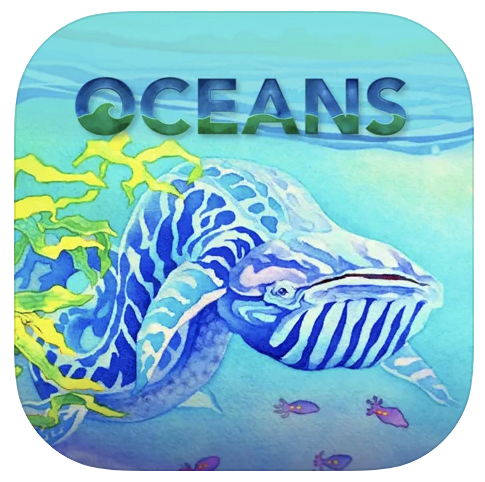 North Star Games’ Evolution series has a history of excellence, especially their award-winning Evolution Digital. So how does the digital version of Oceans fair against its proven brother?

In Oceans Digital, you compete against an AI opponent to grow and adapt your species into resilient eating machines. It is survival of the fattest in this card-based engine-builder.

On your turn, you will play 1 card from your hand either as a new species or as a new trait for an existing species. You then choose which species to eat, and if possible, where they should eat from. Species will age, which gives you points in the form of food. You will decide if you want 1 of the available deep cards, which cards you want to discard, and end your turn by drawing back up to your hand size. As the game goes on, the speed of play picks up, and you start playing 2 cards per turn and aging species twice.

As in Evolution, the fun of Oceans Digital lies in creating creatures who combo with each other, who devour whatever your opponent tries to grow, or who eat tons of food. Responding to your opponent’s super species via evolution is the meat of this game, and it provides an enjoyable back-and-forth experience. What’s different in Oceans Digital is that you can only choose 1 of your species to eat, so combos and traits that feed off other traits (think cooperation from Evolution) are essential if you want to keep more than 1 species in play.

The biggest flipper up Oceans has over Evolution is the Deep cards. Deep cards are super fun because they are extra-powerful trait cards with names that a thalassophile (ocean-lover) like myself can dig into and enjoy: Leviathan, blubber, deep-sea Kraken, draconic, Sea Rex. The downside is that you have to spend points to attach them to a species, but they can be wildly beneficial.

Oceans Digital also mechanizes some of the cumbersome housekeeping issues of the physical copies of Oceans. The game handles the aging, eating, and distributing of fishes to their correct spaces, which can cut a single-player game down to 15-20 minutes.

The AI in Oceans Digital offers 3 difficulty levels and 5 personalities, which can be fun to experiment against. Sure, you can beat a defensive AI, but can you beat an aggressive AI? The lack of campaign is unfortunate because, while the game is fun, you don’t really feel like you’re progressing towards anything, unless it’s a goal you’ve created for yourself: beat your friend, beat the hardest AI, etc.

As with Evolution Digital, Oceans Digital’s tutorial is well-planned and does a thorough job of teaching new players the game. I would recommend this as the default way to learn Oceans, whether you’re playing the digital or physical version, especially because the free version of Oceans Digital includes the tutorial.

The theme is excellent, and I’m not just writing that because I love the ocean and its creatures. The artwork is phenomenal, as I’ve come to expect from Evolution games, and the animations are satisfying, even if blander than Evolution Digital’s because of the more limited capabilities of apps.

I’m not a huge fan of playing games on my phone because I have a tiny screen, so I find Oceans Digital much more enjoyable to play on my MacBook. The app is not really designed for this, but the designers told me that they plan to release a Steam/macOS version at some point in the future. For now, I could see it being swell on an iPad or similar device, but it seems slightly cumbersome to read everything on a small phone screen.

Part of the fun of any tabletop game is playing against another player. Oceans Digital has a pass-and-play mode, but unlike Evolution Digital, Oceans Digital does not support online multiplayer. I asked the designers about this, and they said they are currently working on an online multiplayer feature, but for now, there is none. Not a deal-breaker, but certainly a feature that will be missed.

Oceans Digital is a game that suffers from its predecessor’s award-winning success. Evolution Digital is a far superior game, but that doesn’t make Oceans Digital bad or even mediocre. Oceans Digital is a good adaptation of the Oceans board game, and it even gets rid of some of the tabletop game’s flaws (long playtime, housekeeping), but it’s held back by the current lack of online multiplayer. However, the developers are working on implementing online multiplayer, and with such a low price point of $4.99 for the full game, it’s hard to knock this game too much, especially as an ocean-creature lover. At the very least, check out the tutorial on the free version of the app.

Oceans Digital is a good adaptation of the Oceans board game, and it even gets rid of some of the tabletop game’s flaws.