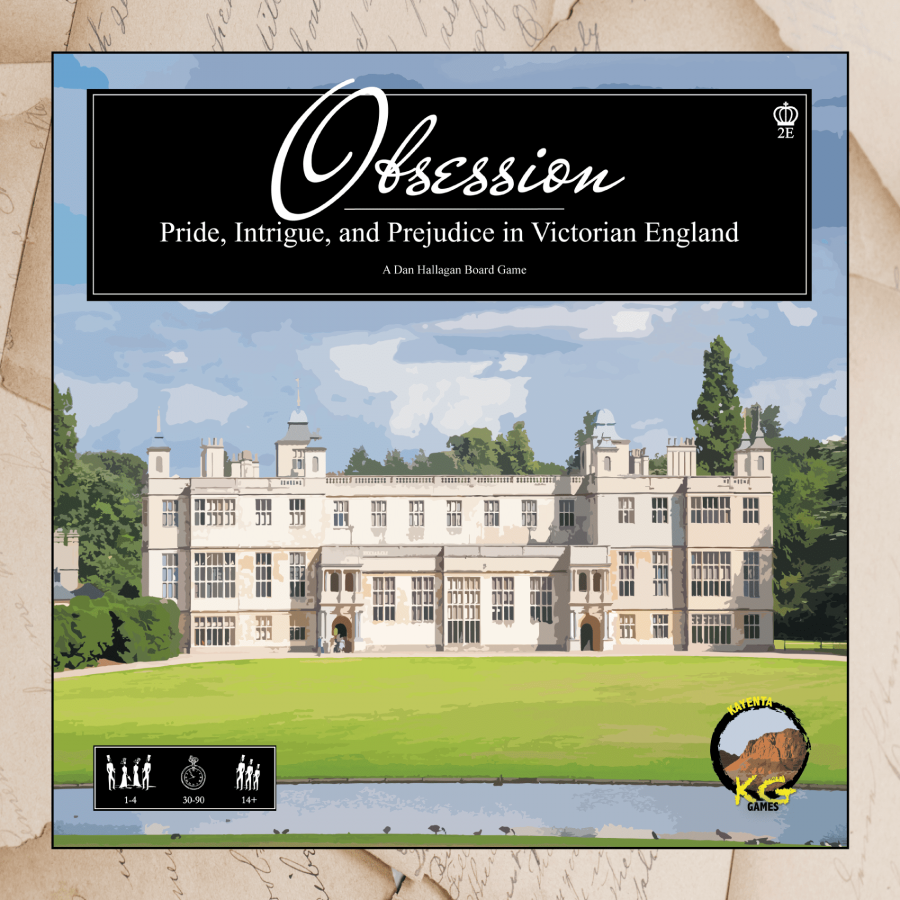 Obsession is a euro-style game about hobnobbing with the Victorian aristocracy. As wealthy families, players aim to enhance their reputation… and their estate! Are you in the mood for some croquet and pheasant hunting?

Obsession might as well be called Pride and Prejudice: The Board Game. In this game, players represent elite English households trying to out-fancy each other. In order to gain the favor of the esteemed Fairchild family, they host increasingly pretentious events and expand their stately manors.

The goal of the game is to earn the most points. Players earn points by increasing their reputation, attracting important guests, and building out their estates. Each player has a personal tableau which tracks their service staff (basically their worker resources), their family’s reputation, and the rooms of their manor. They also begin with a hand of cards representing the members of their family and 2 close friends.

Hosting events is at the core of the game. Each round, players have the opportunity to put on an event like a formal dinner or an art viewing. These events require the help of the service staff, so players must spend certain workers to carry out each event. When used, workers are placed in a spent area, from which they will refresh after 2 rounds.

But what fun is a croquet game if there is no one to play with? Events need guests! When hosting an event, players play cards from their hand to invite other gentries. Each event has a required number/type of guests, some of whom will require service staff of their own.

Events and guests provide rewards, with which players can expand their estates, host better events, increase their reputation, and attract more guests.

At certain points throughout the game, the board-state is evaluated and the player who has progressed the most in a certain area gets a visit from the Fairchilds. This provides a significant benefit for several rounds thereafter.

Play continues with players hosting events and reaping the rewards until the round marker reaches the end of its track. At this point, final scoring occurs and the player with the most points wins.

Obsession is an enigma. It’s rare for a game from a first-time publisher to make such a splash, and it’s rare for a euro-style game to be so deeply thematic. This is not remotely my style of game, yet I fell in love with it right out of the gate. Make no mistake, Obsession is terrific, I would even dare call it a masterpiece.

The strategy here runs deep, offering players lots of decisions while not feeling overwhelming. To complement this, the actions players take each turn help to bring the theme to life, and the text on the character cards helps them to feel like unique individuals in the game world rather than generic faces in a card deck. I also like that some of the guests are bad to have, such as unscrupulous gossips who tarnish a family’s reputation.

As players play Obsession, they will find themselves plotting out multi-turn strategies. Their internal monologue will be something like “I need to host this event, but to do that, I first need to recruit an extra white worker. Then, once I host the event, I’ll make an extra £300, which means I’ll be able to buy a monument tile. And, if I send this guest to the event, she will earn me a prestige guest, which will give me even more points.” The quick-playing turns and minimal downtime mean players will remain engaged from start to finish.

The production of this game is very nice. Everything is cleanly laid out, which makes things intuitive for newcomers. The rulebook is thorough and provides helpful information like the average distribution of points from the various scoring criteria. It’s clear that a great deal of thought went into this game, and the play experience is all the better for it.

In contrast to my typical aversion to euro games, I love Obsession. This game succeeds, with flying colors, at bringing to life the era of Victorian elitism. Marrying deep strategy and strong thematic immersion, Obsession gets my highest recommendation.

Despite my typical aversion to mid-heavy euro games, Obsession is excellent. It's one of the best games out there, an absolute must-play.