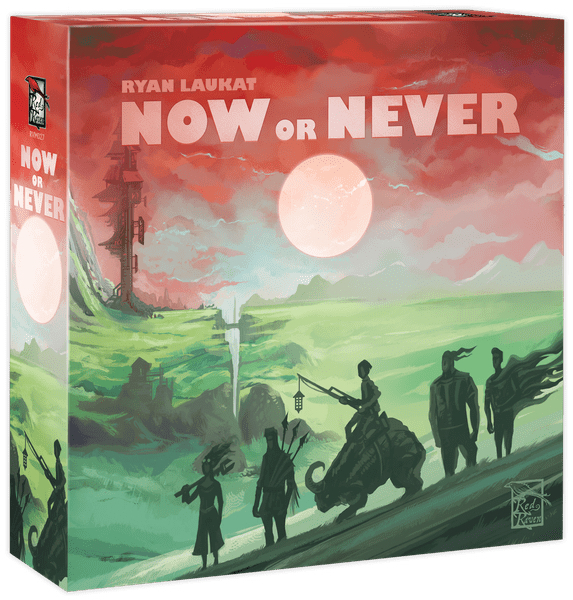 Now or Never is the third game in a series from Red Raven Games, following Above and Below and Near and Far. For anyone new to the series, you don’t need any knowledge of the two prior games, but they feature similar town-building, resource-collecting, and story-driven elements, with the same high-quality artwork. So is this game like a triumphant returning hero, or just like getting lost in the desert? Read on for the review!

Players will encounter many different enemies including animals, demons, and otherworldly creatures corrupted by magic. One of the resources that players can collect is Bottled Demons, and there are a few magical items in the Gear store that refer to vampires and witches.

In Now or Never, one to four players take on the roles of refugee heroes hoping to reclaim their ancestral village (called “The Monument”) two decades after a crystal meteorite crashed nearby, releasing monstrous enemies onto the world. Players will explore the board while simultaneously building up their individual town boards, and keeping an eye on their hero’s personal board which contains their gear, abilities, specialists, health, and mana. If you invite three friends over to play, you’re going to need a big table and lots of time – the game advises that it takes 45 minutes per player, and that’s not hyperbole. A full game takes 6 rounds, and with all of the actions and decisions you can make, if you bring this out on game night it will take all evening.

Players begin with a couple of advisors and some coins, and will need to accumulate more of both to achieve their goals. Once they have built some buildings, they will try to get villagers on them to increase end-of-round production; villagers not assigned to buildings don’t produce anything. Building is done in an interesting way – players lay out a four-by-five grid of tiles and choose their first tile to build; any subsequent tiles chosen have to be adjacent to where the first one was. If players can fill up rows of their town, they’ll earn extra victory points at the end of the game. Every filled row after the first awards extra points, and every row that has all four types of villagers earns more points.

Besides building up their town, players will venture out into the world, exploring, fighting, and questing, all while trying to add resources and villagers to their stock. Exploring is simple; it involves going to a spot that has a search token and stopping there to flip it over and possibly claim it. Fighting is resolved using a D4, which tells players what ability/item their character is using based on their hero board. The fight continues until the enemy or character is defeated. As players explore and fight, they need to keep an eye on their health, since even the simple act of entering a space with mountains chips away at their hearts.

At the end of the last round, players clear their coins/resources and produce one last time, gaining any resources their fledgling towns and villagers contribute. They then sell off their resources and tally up points from quests, coins, fulfilled orders, and town tiles. Production is not only vital to making progress throughout the game, but also to winning in the last round.

If that were all that Now or Never had to offer it would still be a lot of game to digest, but it doesn’t stop there. In fact, the basic game just scratches the surface. The full game includes a solo mode, alternate boards, and six story-mode chapters, each with 40-50 pages of story entries specific to each character. When playing the story mode, the search action involves reading story text rather than flipping search tokens. The narrative bits often call for a die roll or player decision, and the player will gain a reward or penalty based on the result. Also new in story mode is the reputation track, which gives players bonuses or penalties based on their position. The player with the highest combined reputation from all six chapters also gets an extra victory point bump.

Now or Never is a heavy game with many moving parts, but once you get into it you can start to see how it all fits together. I just wish it was a little easier to set up. Many games with an overworld board just have a generic monster token or deck that you draw from, and while that might be less visually appealing to some, it makes setup ten times faster as well. While I grew to appreciate the game for what it offered, I still feel like it tries to do so much that it almost feels like too much. Also a quick note on the components: I liked that the resources were wooden tokens, but would have preferred different tracks for each so they were easier to keep an eye on. In addition, the Hero Boards I got were a bit warped.

In the end, the writing really helped pull me back on board; it’s truly impressive that Ryan Laukat and his small staff designed, illustrated, wrote, edited, and published Now or Never as well as many other games in their catalog. If you’ve played either of the previous games in this trilogy, you pretty much know what to expect here with some slight variation: a meaty game where you collect villagers, resources, and items while building up a town and your coffers in hopes of doing a better job than the rest of the table. Players just need to know that the box isn’t kidding when it says 90-180 minutes, possibly longer in story mode. But if that sounds like your cup of tea, you should give Now or Never a look.

A review copy was generously provided by the publisher.

There's a lot going on here, but if this is your jam then I suggest you find some toast because you'll like it.