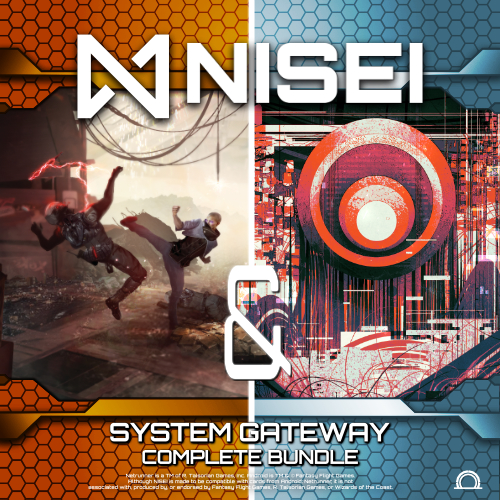 Netrunner is a game that was originally designed by Richard Garfield, then picked up and redesigned by Fantasy Flight Games (FFG) who printed several base copies and expansion packs all the way up until 2018, when their license ran out. NISEI is, “a fan-run nonprofit volunteer collective. Our mission is to keep the game of Netrunner alive and thriving after the end of the official FFG era.” NISEI has picked up the Netrunner flag and run with it, making card packs, expansions, and even setting up organized play so tabletop gamers who love the game can continue to play it for hopefully years to come. So how is it? Read on for the review!

In the setting of Netrunner, the not too distant future is a bit like Blade Runner where mega-corporations run the world, and individuals have little recourse to fight back against them. That’s where the runners (hackers) come in. NISEI’s version maintains the setting and the asymmetrical play from the FFG version, all while trying to streamline and ease players into the game. To that end they’ve succeeded; it’s easier to jump in and play than I remember with the FFG core box. For example, instead of having separate cards for player aids and tracking your clicks (a click is a unit of time used to measure actions taken or available) NISEI combined them, making the play area less cluttered and making one less card to print.

During the game, the megacorp player wants to protect their assets and advance agendas to the point of scoring them. They also want to protect their servers (cards in the play area) with Ice, which act like firewalls to stop the runner. The Runner wants to build up their hardware and software to help them break any Ice they may encounter, and make runs on the megacorp’s servers to try and steal agendas or discard cards helpful to the megacorp. In a full game, the player to score 7 points from agendas first is the winner. If the runner is flatlined (runs out of cards during a run), the megacorp wins.

The System Gateway Complete Bundle comes in two parts: the Starter Pack and the Deckbuilding Bundle. The Starter Pack comes with two sides: “The Syndicate” megacorp and “The Catalyst” runner. Each starts with a smaller deck than usual for your first few suggested games, then it suggests adding some advanced cards to expand your decks. I really liked the way they laid this out, as it made the first few games a bit softer and quicker, and let me see most of my deck. While the need to learn a bit of new vocabulary is still there, NISEI has done a good job breaking down the game on their “How to Play” section of their site, and players wanting to do a deep dive can even download the Comprehensive Rulebook.

Something to keep in mind if this is starting to interest you: when you get the game from NISEI, all you’re getting is the cards themselves. No game box, no tokens, no sleeves or play mats.  Spare change works well for tracking credits and advancement tokens, but you may want to find some spare cardboard chits in the long run.  I was able to make custom Click tokens from extra plain white cardboard discs, and will probably steal money chits from another game in the future.

The Deckbuilding Bundle comes with 3 more runners and 4 megacorps, each with similar cards but variations on what they’re best at or good at doing. For example, the Jinteki megacorp is good at generating credits and ending runs on their servers, while Haas-Bioroid has a lot of cards that extend your turn or quickly move cards into your hand. Players will want to get comfortable with the game before building a deck, as there is a lot to consider, but it’s a great way to extend the life of the game and change things up from game to game.

NISEI has done something amazing: they’ve released a product that does a great job of being on par with the quality and competency of a major games publisher. If you held up a card from 2016 versus one of NISEI’s from today the quality would be comparable if not the same. And that’s what they set out to do: revive a game they loved and make it compatible with past releases while also making it viable in competitive play again. If I had to level a negative at the NISEI release I’d say that while it lowers the entry bar, it’s still not an easy game to jump into thanks to the high vocab bar and cards-only products; but if you ever wanted to play Netrunner, there’s never been a better time.

A review copy was generously provided by NISEI.

If you've ever wanted to play Netrunner, this is the best way to jump in.