Review – Night of the Ninja 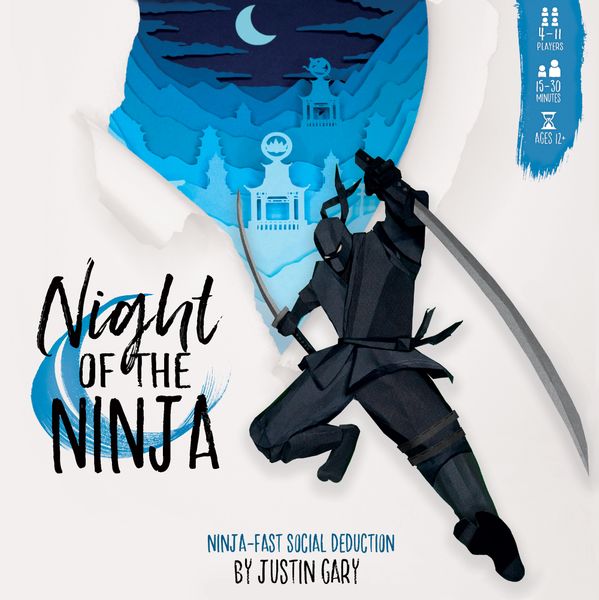 Night of the Ninja is a social deduction game where players play as two different Houses of Ninja, each trying to take out the other house’s top ranking survivors! And with the game’s Honor system, players can still get closer to winning even if they didn’t survive the round. So is Night of the Ninja a blast to play, or just a stab in the dark? Read on for the review!

Some cards let you kill other players, but only weapons and silhouettes are shown, no blood or contact.

I don’t usually go in for social games, because unlike some of my friends I’m not a sociopath. I’m not good at lying to someone’s face one round and destroying them later on when they least expect it, so a social game with fast-paced rounds sounds much more appealing to me. Each round in Night of the Ninja players will be dealt a House card – either Lotus, Crane, or Ronin if there’s an odd number of players (more on this later). Then they are each dealt 3 Ninja cards, they keep one, then pass two left. After keeping one of the two passed to them, the third card is discarded. Play then proceeds to the Night, where cards are played in order, and each phase the cards activate lowest to highest. If at any point a player is killed, they knock over their standee but do not reveal their House card. When the Night ends, the House with the highest ranking survivor wins, and every member of that house gets an Honor token. If there is a Ronin and they survived the night, they get one as well. If the survivor’s scores are a tie, everyone who survived gets an Honor token. Tokens are worth 2, 3, or 4 points, and the first player to 10 points wins. If no one has won at the end of the round, House cards are reshuffled and a new round begins.

I love that the game is quick-paced, and loyalties only survive as long as the rounds, which are a few minutes each. It’s also great that even if you die, you can still get points and potentially win, and I appreciated how using the Ronin for odd-numbered player games keeps things from feeling lopsided, as it can in other social games.  I have a love/hate relationship with The Resistance, because after five long rounds and arguing back and forth it feels like actual betrayal to find out someone you thought was one of the “Good” folks turns out to be not on your side. In Night of the Ninja rounds are over so quick it’s hard to have hurt feelings when you might have actually still scored or eked out a victory despite trusting the wrong person.

The art has the characters almost all in silhouettes except for the standees and box, and the black outlines look striking and eye-catching. The components are all nice thick cardboard for the standees and tokens, and smooth-feeling cards for the House and Ninja cards. I did have some slight bowing of my Ninja cards, but I’ve seen that before in other games with oversized cards, and it’s not a deal-breaker. The House cards are the standard size. Gameplay-wise, all of the decision-making is on who you decide to Spy on or Assassinate, depending on the round, since there’s almost never a reason to NOT use a Ninja card. How you use some of them will have a large impact (such as which discarded card you choose to use as the Grave Digger) but a lot of the decision-making has been streamlined, which depending on your gaming group could be seen as a positive or a negative. Overall I liked it, but there were a couple rounds where I felt like it was merely luck of the draw on which Ninja cards I had.

Night of the Ninja is on the lighter side of Social Deduction games, which in itself isn’t usually a heavy or crunchy field of tabletop games. But I really enjoyed the quick-paced games and how the teams changed each time (except one run of games where Zoey kept getting the Ronin card despite copious shuffles). This would be a great game to introduce to non-gamers, people just getting into the hobby, or anyone who wants to try a social game with a quick enough turnaround that it’s hard to get anyone’s feelings hurt.

A social game with low entry bar and quick turnaround makes Night of the Ninja an easy suggestion for anyone look to play a quick game.