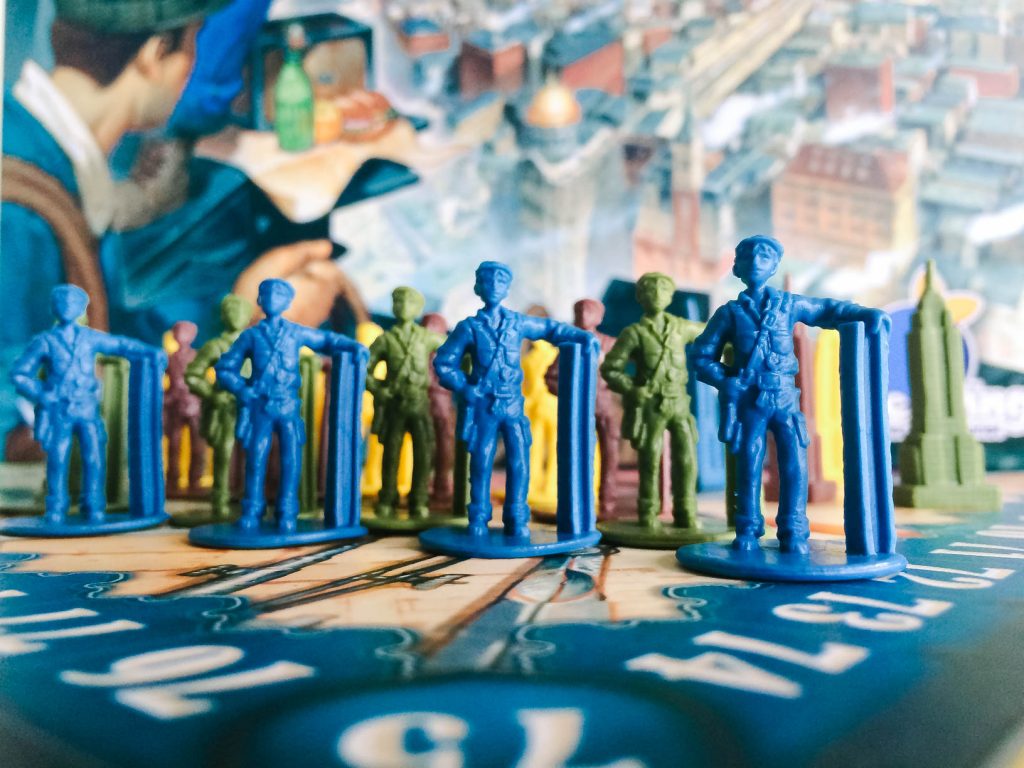 Imagine: More than a century ago, your rich grandfather left you with a wad of cash and a small estate in the up-and-coming New York City. Your only task: to build the city’s greatest real estate empire and take your place as one of history’s most influential landowners, responsible for raising legendary skyscrapers and crowding the sides of the busiest streets.

This is New York 1901, published by Blue Orange Games. Blue Orange is typically known for family-style games, so New York takes a bit of a departure from the usual fare, venturing into the same category of gateway titles that Ticket to Ride might fall into.

New York 1901 is just building and destroying buildings in the early 1900s. Nothing questionable.

In New York 1901, your starting location is determined by the color on your player tile. This gives you a locale to begin your construction empire.

Choose carefully… Just kidding, it doesn’t mean too much.

Spread before you is a mess of differently-shaped buildings with either a bronze, silver, or gold symbol on them. As you construct skyscrapers, you receive points, as shown on the building tile. At the game’s start, you may only build bronze skyscrapers, but as you progress, gaining points, you will unlock the silver tier, and eventually the gold level.

This doesn’t necessarily mean more points, but as you run out of space, you must demolish old buildings to make way for newer construction. The “generation rule” does not allow players to replace a bronze building with another bronze, or gold for gold. You must destroy something old and replace it with something new.

A big mess of tiles, either: bronze, silver, or gold.

Players take turns choosing one of two actions: take a district of land and build, or destroy an old building and replace it. A la Ticket to Ride, you draw from an open card market of potential building locations, which are denoted on card and board by color and squares. From here, you place one of four workers onto any matching spot on the board, and may then choose to end your turn or build a skyscraper.

Later on, you will be able to demolish old buildings, combine their previous real estate with newly-acquired adjacent territory, and replace both with a new building. Players also have a chance to build a legendary skyscraper, earning them big point payouts, at the cost of needing a large plot of land to even consider it.

One of five legendary skyscrapers. Nets lots of points, and a potential game-ending tiebreaker.

The board is split up into blocks, surrounded by streets like Broadway or Pine. This matters, because players work towards three different end-game bonuses that award points to the player with the most bordering buildings to the designated street. Another specific end-game bonus card awards most “circle” buildings or most gold buildings, etc.

The components are mostly standard tiles and cards. Each player has a nice skyscraper miniature, alongside four worker minis. The card and board art really sells it for me. I’m not a big fan of the “old-timey” look, but the artwork really follows through on every piece, even to the point of confusion in iconography. One might argue the provided “action menu” on your player tableau and extra action cards are a little vague in their delivery.

Here, blue took the lot card from this space, and placed a worker. It is impossible for me to remove his worker.

This is a game I’ve been looking forward to playing since I heard about it at GenCon last year. While masked as a friendly intro-game, I’m convinced I’ve been lied to. Ticket to Ride is somewhat commonly referred to alongside New York. Both games have layers of strategy, but New York stands out to me as very subtle in how nasty it can get. Sure, I hate getting my route blocked in Ticket, but here, with one quick action, a player can ruin my shot at a legendary building, essentially voiding my last four turns.

That, at least, was my original thought on the dirty nature of hurting your opponents in the game, but the more I’ve thought about it, I’m not totally sure legendary skyscrapers are even that important to your success. You can grab just as many points by focusing on the street bonus, and, in fact, you might even lose your shot at the street bonuses because you demolished your bronze-tier skyscrapers to make way for the legendary. This would effectively decrease the number of buildings adjacent to a street, allowing another player can take the mantle as champion of Broadway.

To this end, I concede that my understanding of the deeper strategic play of New York is limited. I fail to understand the intricacies of why you would choose a number of smaller buildings over larger, and just why a two-square card could be more valuable to you than a three-square card. Furthermore, are the one-point bonuses from keeping your extra action cards until game’s end all that worthwhile?

It is these things that lend to the curiosity of New York 1901, furthermore establishing it in my mind as a very necessary game. I can’t help but recommend this game, but there are some caveats to be noted.

This complaint may not be currently accurate (as there has since been a revision by the designer that you can find here), but the original rules for the game are not very clear in a few areas; two of which are: (1) what you can actually do on a turn, and (2) what does a lot/district card actually mean for you, once drawn? There is no clear distinction between a two-square and a three-square lot. Some have flower emblem designs, and some don’t, while some are simply a bland, two-square design. This also lends confusion to the purpose of even needing to place workers once you grab a lot card.

Here stands the might blue worker. Ah, may his harvest of skyscrapers be plentiful.

On the subject of workers, I have no understanding as to why I would need four. It seems too many. I understand there is importance to blocking, but why wouldn’t I always build a skyscraper on my turn? The points are too beneficial, and, of course, I can get the added prize of bordering a street for the end-game bonus.

Another thing that adds more confusion than needed is the closeness of player colors to the district colors on the board and cards. I understand that player color doesn’t relate, or have much purpose, but it doesn’t explain the choice to keep colors so similar, or nearly identical. This adds lots of confusion for new players, unless they are familiar with other games that have similar artwork issues.

Finally, while I think this game sits squarely in queue next to Ticket to Ride, I don’t think I can recommend it as someone’s first hobby game. Don’t get me wrong, New York is extremely simple in execution, but the difficulty in understanding the strategy of why and where to build or replace is a little too cumbersome. I think it a complete turn-off actually. The diversity of choice between aiming for street bonus tiles or rushing a legendary building–while respecting the generation rule and adding very flavorful decision-making–might be too much for a very casual gamer.

That said, I have decided I very much enjoy New York 1901. It is by no means an extremely complex game, but I think it packs more than enough charm and interesting decision-making to warrant a purchase in most collections.

A review copy of New York 1901 was provided by Blue Orange Games in exchange for a fair and honest review.