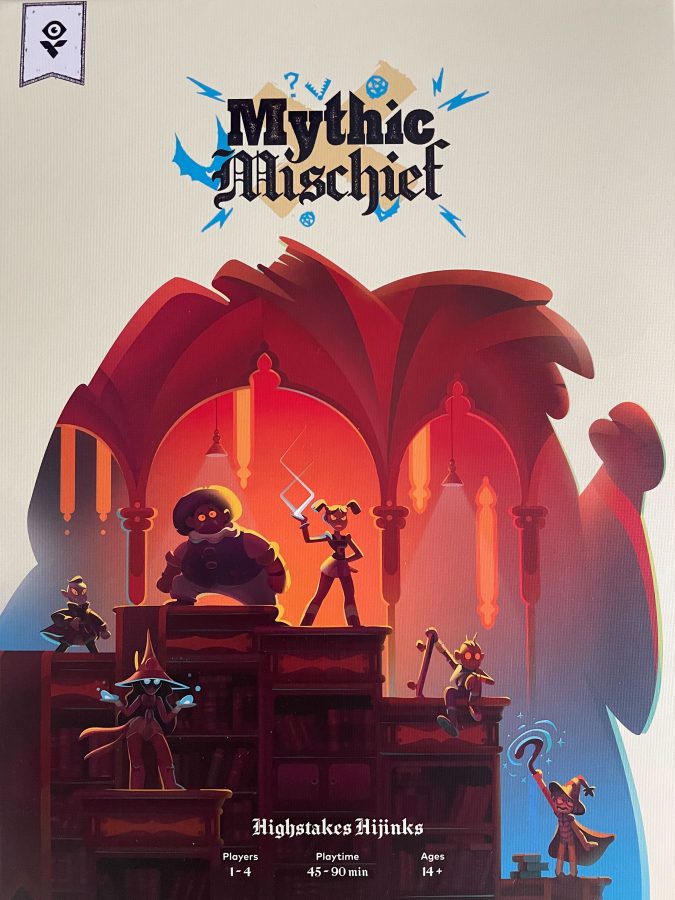 In Mythic Mischief, players will take on the roles of 1 of 7 different classic monster groups (such as zombies or vampires) and try to maneuver their 3 characters around the library board in such a way that they can pick up tomes (to upgrade skills) and push, pull, or trick their opponents into the path of the Tomekeeper. The player with the most points, or the first to 10, is the winner! So, is this like a Monster Mash in Hogwarts’ Library, or is it a scarily sleepy shuffleboard symposium? Read on for the review!

Player factions include Vampires, Monsters, Zombies, Wizards, Ghosts, Witches, and Trolls (the last 3 are considered expansion groups). Each group has different rules for how they interact with the library walls and how they push or pull opponents as well as their special abilities. The Witches have a Bewitch special, the Ghosts have a haunted space they can use, the Wizards use Portals, the Vampires can collect blood tokens, and the Zombies can drop Decay tokens. All of these just help them move more or prevent opponents from moving them.

Mythic Mischief can be a little bit daunting at first – everyone moves the same way (the sum of your dice in the move slot) but each group interacts differently with the shelves and with how they can move opponents. For instance, Vampires have Lure – Move an ally or enemy 1 space orthogonally or diagonally directly toward you – whereas Monsters have Throw – Move an ally or enemy from a neighboring space to the exact opposite neighboring space. Learning how these different skills and abilities interact and counter each other will take up most of your first game, which is why they suggest skipping using the Legendary and After Lunch abilities for your first time. I would go one further and suggest that if time permits, players should play at least twice, trading with their opponent who they’re playing as for the 2nd game so they can better understand how that class works. Unfortunately, this means that until all the players involved understand how each class works, some might be at a disadvantage due to not knowing how to best protect or attack on their given turn.

Play consists of each group using up each their dice – if you have a 3 and a 2 in your move slot, you can move up to 5 spaces, if you only have 1 in Lure you can only use it once, etc. Then the Tomekeeper moves based on the active card, either 4 or 3 spaces. Any Mythics (characters) that he runs into get removed, and the active player gains points for each unless they were theirs. Then the active player does Cleanup, returning all Action Dice to the leftmost empty slot, Slotting any Tomes they earned, and Boosting 2 Abilities 1 space to the right. Then they set all their dice to the number above them.

The Tomekeeper moves from spot 1 to 2 to 3; if he has any movement left over that turn he tries to return to the center of the board. His movement is always the most efficient route, but the active player can decide his path if the spaces are equal. The turn after he reaches space 3, players flip over the “Before Lunch” card, and flip face up the “After Lunch” card. This reminds everyone at the table that the game is half over, and if you’re playing with them they can use their After Lunch Special abilities. I always like it when games give a distinct mark to remind everyone when certain points like halfway have been reached. The Before and After Lunch cards also detail where tomes are located, and where players can come back onto the map.

Once someone reaches 10 points, or the Tomekeeper gets to space 3 After Lunch, the game is over. In case of a tie, the player with the least number of tomes on their player board wins (this did happen in 1 of my games). There are also some additional game modes, such as solo and Blitz, but I’m not big on real-time game modes so the latter didn’t interest me. In the end, Mythic Mischief gives players a lot of different options on how to play, which is great. Anyone looking for a fun, asymmetric battle game should look into it, as long as they know they’ll need to learn everyone’s rules to really be able to run the table.

Don't let the cute fantasy characters fool you - there's deep strategy to be had here, as long as you know everyone's rulesets.